Traditional crafts worker Yamaguchi Kimie fondly recalls the words of her father-in-law, “The chairman often said, ‘We sell romanticism. I want everyone to have umbrellas that make them feel bright and cheerful because rainy days always leave people feeling gloomy,’ that’s how I remember him putting it.” 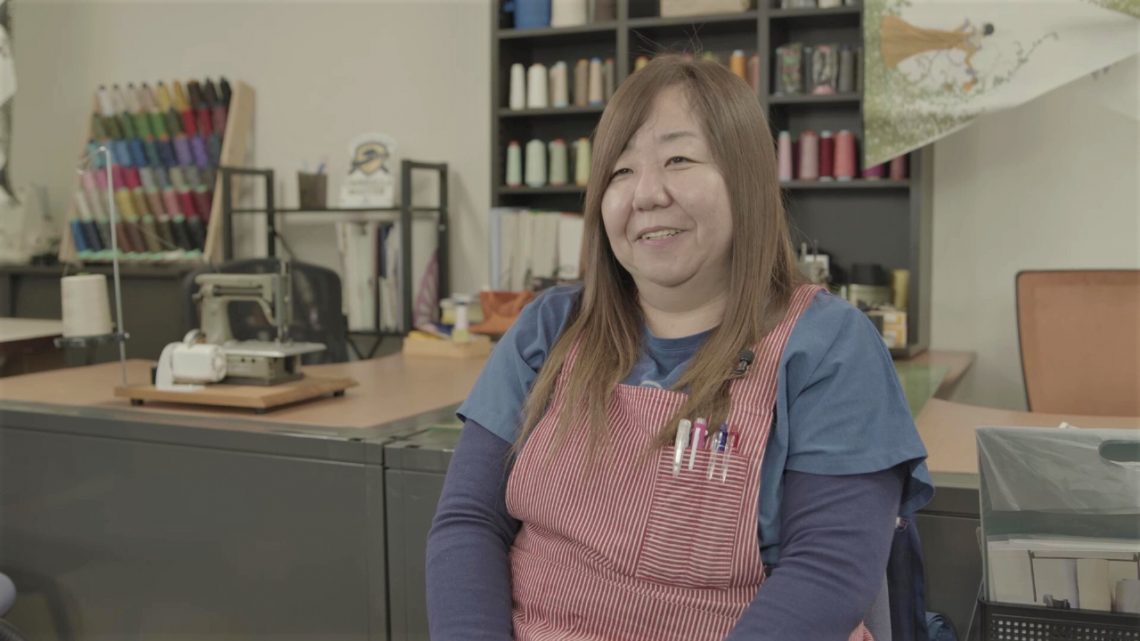 Having originally founded the company as Mont Blanc Yamaguchi in 1960, the chairman was captivated from the bottom of his heart by – and consequently became a stickler for – the labor-intensive hand-woven weave known as “hogushi-ori”.

The hogushi-ori technique involves hand printing (stencil dyeing in the process known as tenassen) individual colors one by one on to a fabric joined temporarily together as a sheet at the middle every few centimeters by a single tacking thread (transverse weft). Once stencil printing is completed, the tacking threads are removed, leaving just the longitudinal warp yarn fabric, which is once again woven in a complicated set of processes known as “moto-ori”, or main weave, to produce a textile with a distinctively loosened pattern. 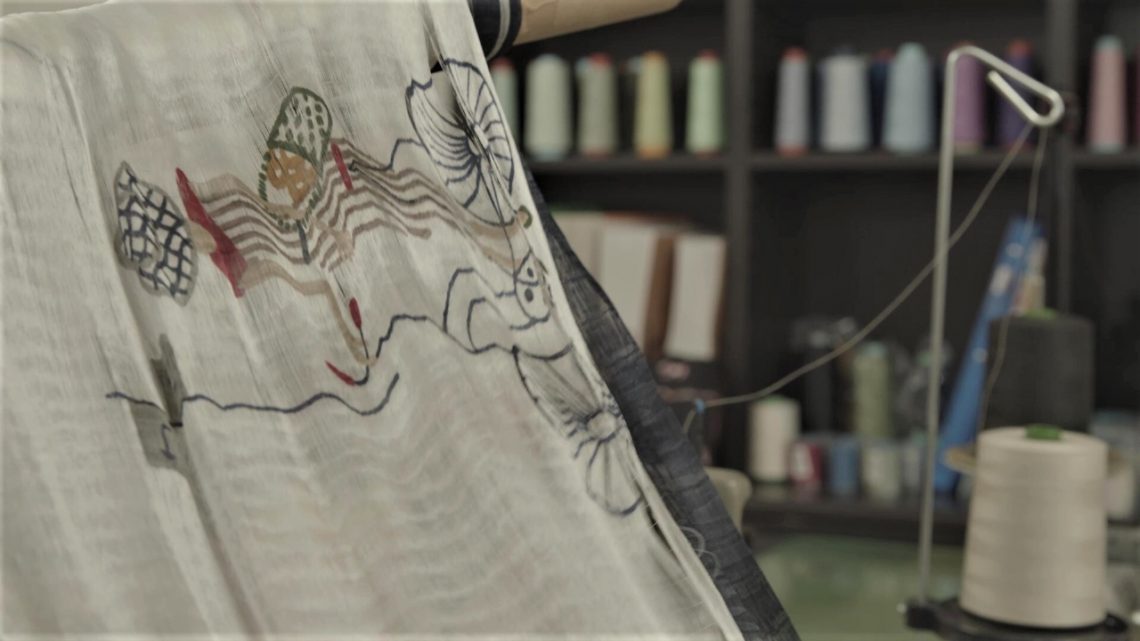 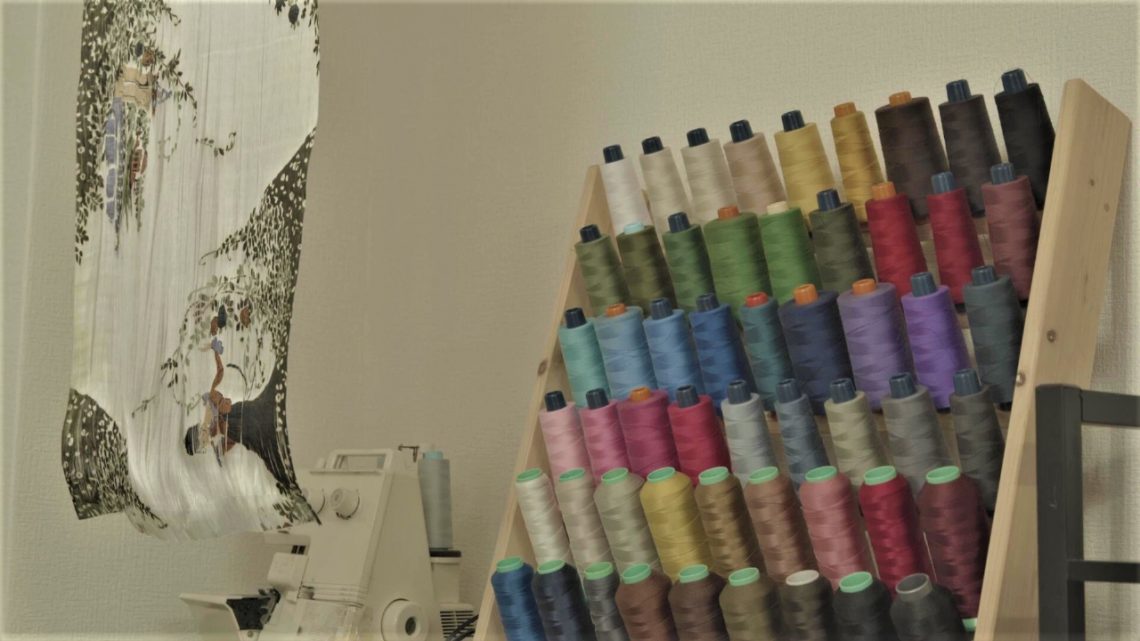 The finished woven fabric is then cut to size as canopy pieces for the varying types of umbrellas we make, stitched together by sewing machine and attached to the ribs of the umbrella they were cut for. The Mont Blanc brand is synonymous with the distinctive hogushi-ori weave, which pose umbrella artisans with the difficult task of aligning pieces so that patterns match without twisting the fabric – hence, not every umbrella artisan is able to handle this taxing work.

And, for those artisans who can do such work, their self-made patterns mean everything to them in umbrella making. Likewise, the fabric cutting knives they use are also important enough to warrant several sharp ones to be ready and waiting, so that when a knife loses its edge, the artisan can switch to another.

Yet, each artisan has his/her way of making patterns and using the cutting knife. And it is said that no-one else can use them because a deviation in pattern or a minute discrepancy in application and/or pull of the cutting knife will develop into a massive muddle as fabric sewing moves forward over 16 canopy panels.

Temperature differences and/or humidity fluctuation will cause fabric to expand or contract by as much as one millimeter. Hence, when a new fabric is being used, the umbrella artisans will do test runs (stretching canopy panels from rib to rib), checking until they are satisfied that the lay of the fabric and pattern matching are good enough for them to move on to proper production. And the fact that each Mont Blanc umbrella tag carries the seal of the umbrella artisan who made it shows the spirit with each artisan takes responsibility for his/her work. 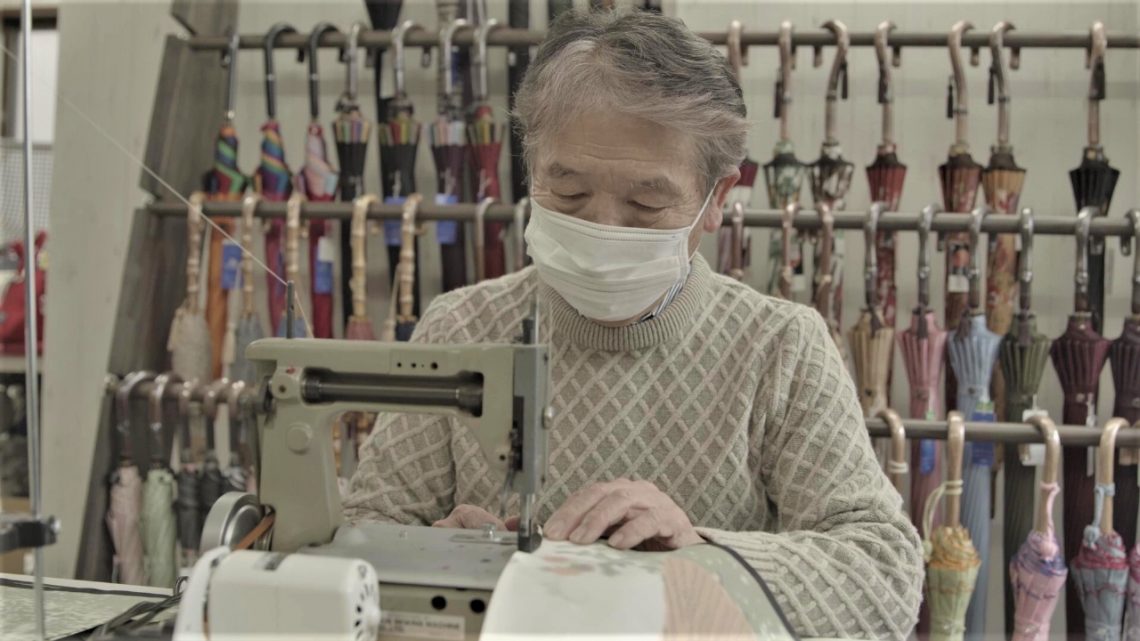 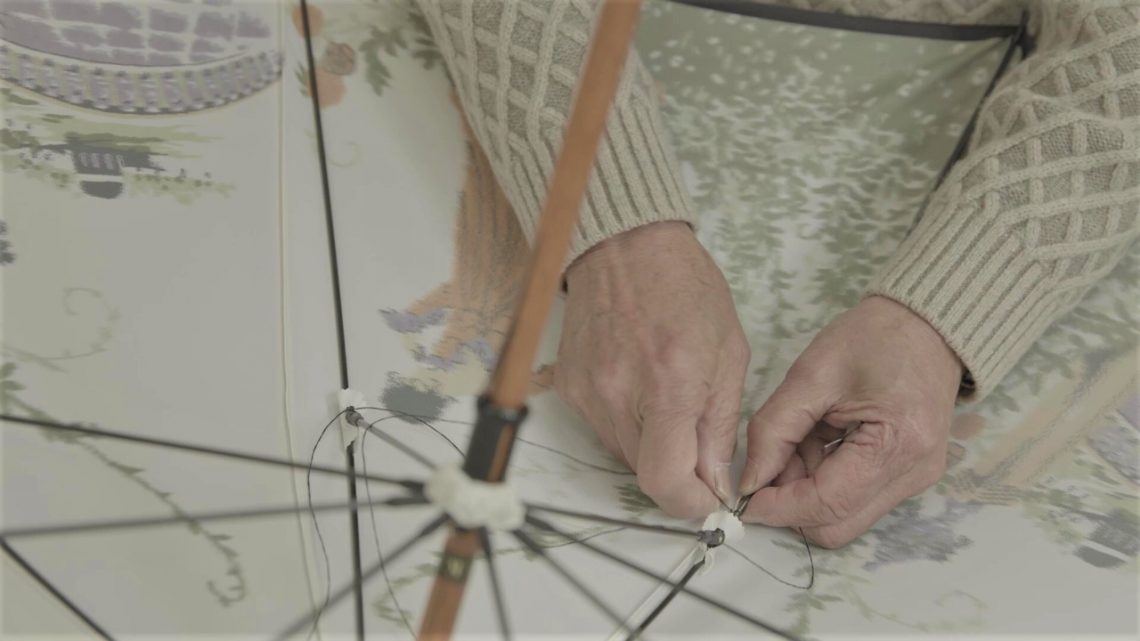 Brought up on those traditions, Yamaguchi Kimie helped out in the business before marrying (into the family), learning the skills of umbrella making from the elderly artisans in the company, who doted on her as if she were a grandchild. Kimie says that she would watch and learn the excellent techniques that some of the artisans had mastered, so that she could increase the number of pattern colors and arrange them in ways that fulfilled the chairman’s ideas for making patterned umbrellas that suit Western styles of dress.

Rather like the soft, slightly unraveled feel of an impressionist painting, hogushi-ori patterns leap out in magnified beauty under raindrop lenses.

And the owners of such umbrellas will surely be eager for a rainy day to arrive. 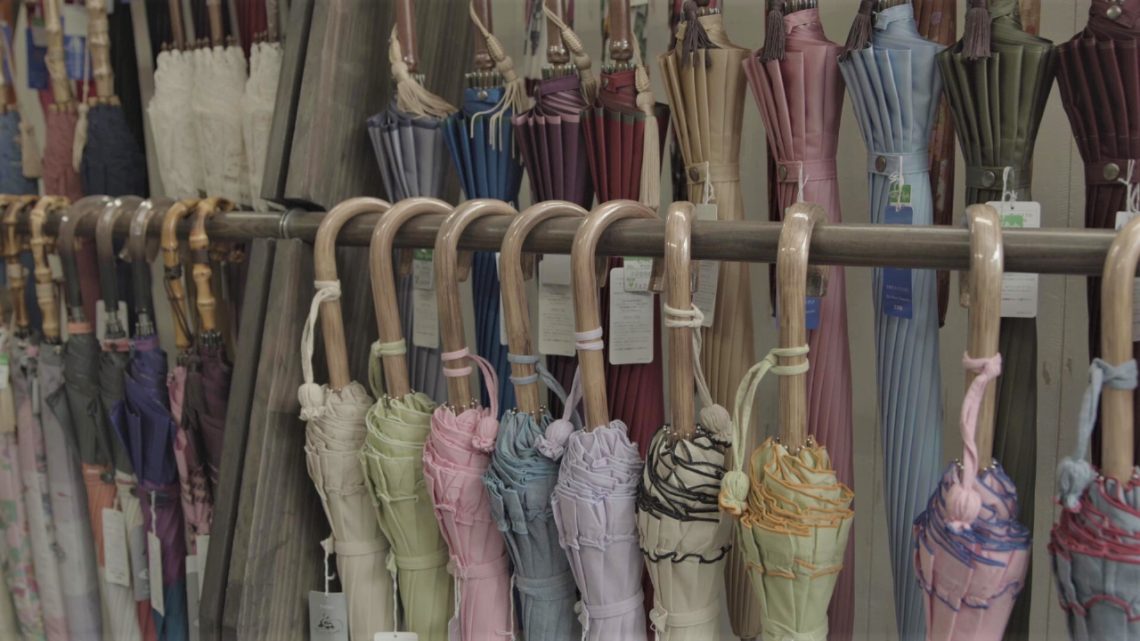