There are large and small tools for weaving a piece of pongee. 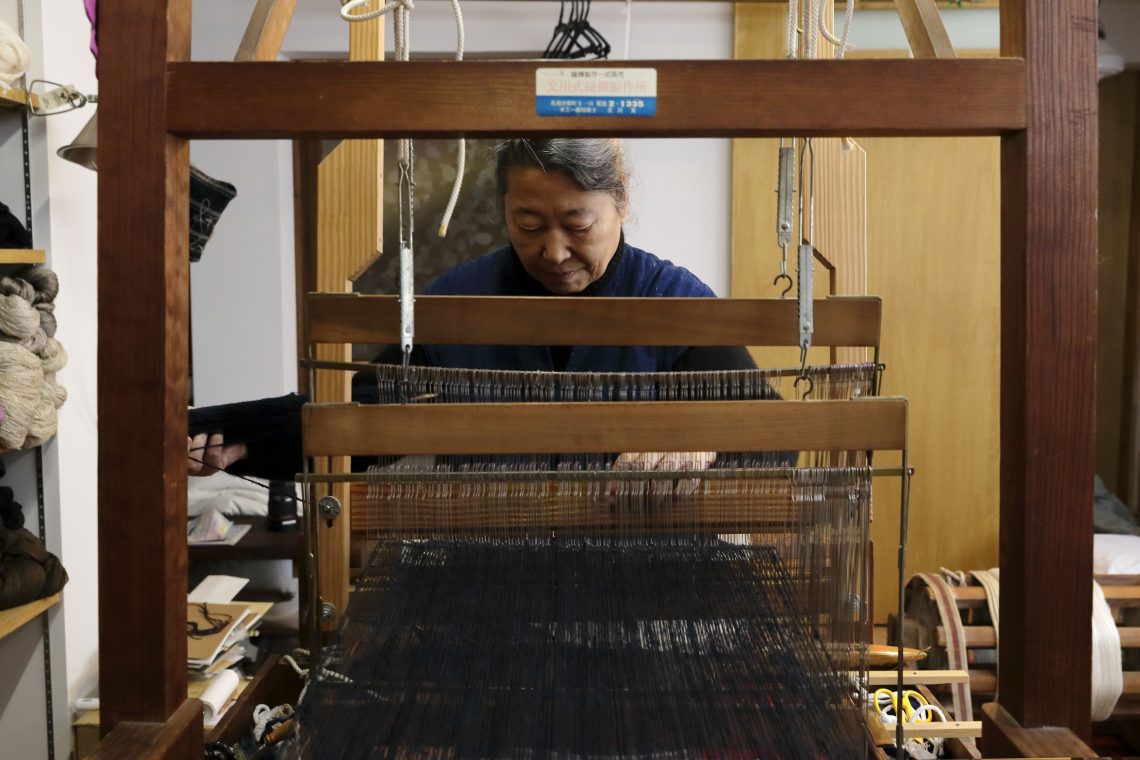 Encounter the profoundness of dyeing and weaving tools

“Weaving loom (tebataoriki)” might be the first equipment that comes across your mind when you think of a weaving tool. By using a foot treadle, the warp (tateito) goes up and down and the weft (yokoito) needs to go between the warp to weave a piece of cloth. The clucking sound that can be heard from the weaving loom is very relaxing and elegant. However, within this interview, we learned that there were difficulties in behind before coming across this elegant weaving scene. The preparation for weaving uses patience, lot of tools and equipment that requires power to set it up. Motoko Oguma is a specialist of thread dyeing and weaving. We visited her newly built house and workshop and were able to see part of her tools which she uses for dyeing and weaving.

The left one is sericin covered pongee. It feels rough when you touch it. The right one is a thread which Ms. Oguma dyed with rose. 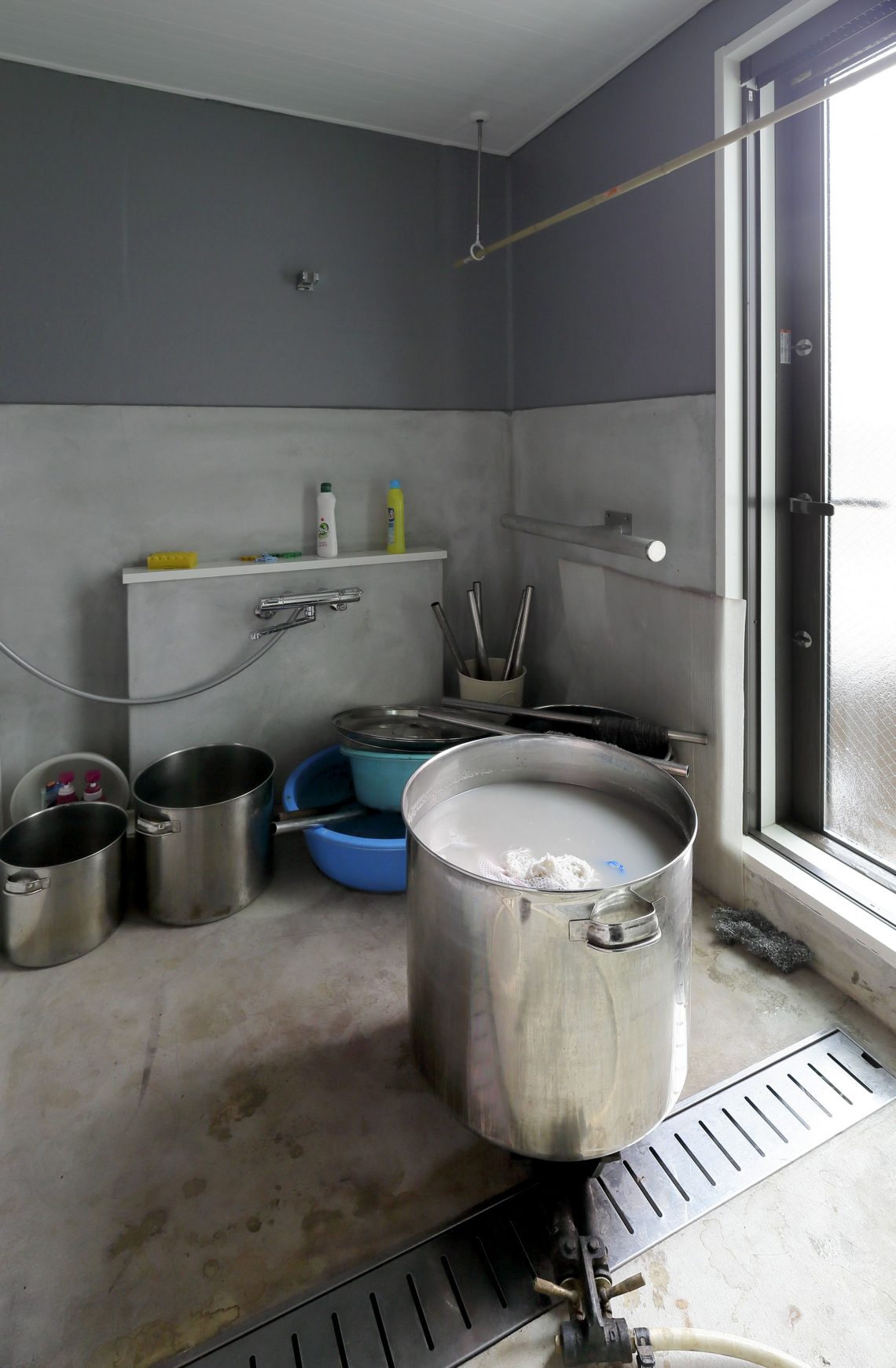 Wash off the sericin and dye the thread with rose

Silk yarn, hemp yarn and cotton yarn are the basic threads that are used in Japan for weaving. Silk threads made from silkworms’ cocoon balls are classified into two types. Silk threads (kiito) and pongee threads (tsumugiito). Silk thread is made by pulling out the tread directly from the cocoon ball. Pongee thread is a strong twisted thread that uses cotton which is made from a cocoon ball. The woven pongee thread is called a pongee. Its feature has a rough simple texture compared to silk fabric which is woven with silk threads. Ms. Oguma is going to use a pongee thread. She buys pongee threads from a specialized yarn store. The threads which she purchases are the rough textured type covered with silkworms’ protein “sericin.” She washes this thread and make it soft. Then she dyes the thread by boiling it with a dye boiled out from the plant. In the bathing room there is a gas stove and a stainless pot. Ms. Oguma uses this place for dyeing.

The one in the front is a “yarn reel (kasekake).” You wind the threads on a “bobbin” that is shown in the back. You can measure the length of the thread wound on the bobbin from the counter that is attached on the “yarn reel.”

Wind the thread in a necessary length by using a “yarn reel.”

After the thread is dyed, the thread is prepared into a shape which is easy to handle. The kanji綛 (kase) is written with the combination of 糸 (string) and 忍 (endure). “Kasewake” is a process to wind a thread in a necessary length from the reel to a “bobbin”, “small tube (kokuda)” and “large tube (ookuda).” These tools are called “yarn reel.” It looks like a “spinning wheel” but it is not. When you steer the steering handle, the counter counts how many times the counter has rotated. This is how the length of the wound thread can be calculated. Steer the handle thoroughly and wind the thread to 12 pieces of “bobbins.” From this point, the process moves on to warp preparing : “warping (seikei).” A thread wound to a “bobbin” is passed through a hole in a broad called “hagoita” and wrapped around the wooden frame neatly. After the thread is removed from the wooden frame, the thread will be wrapped around to an equipment called “warp winding device (tatemakidai).” 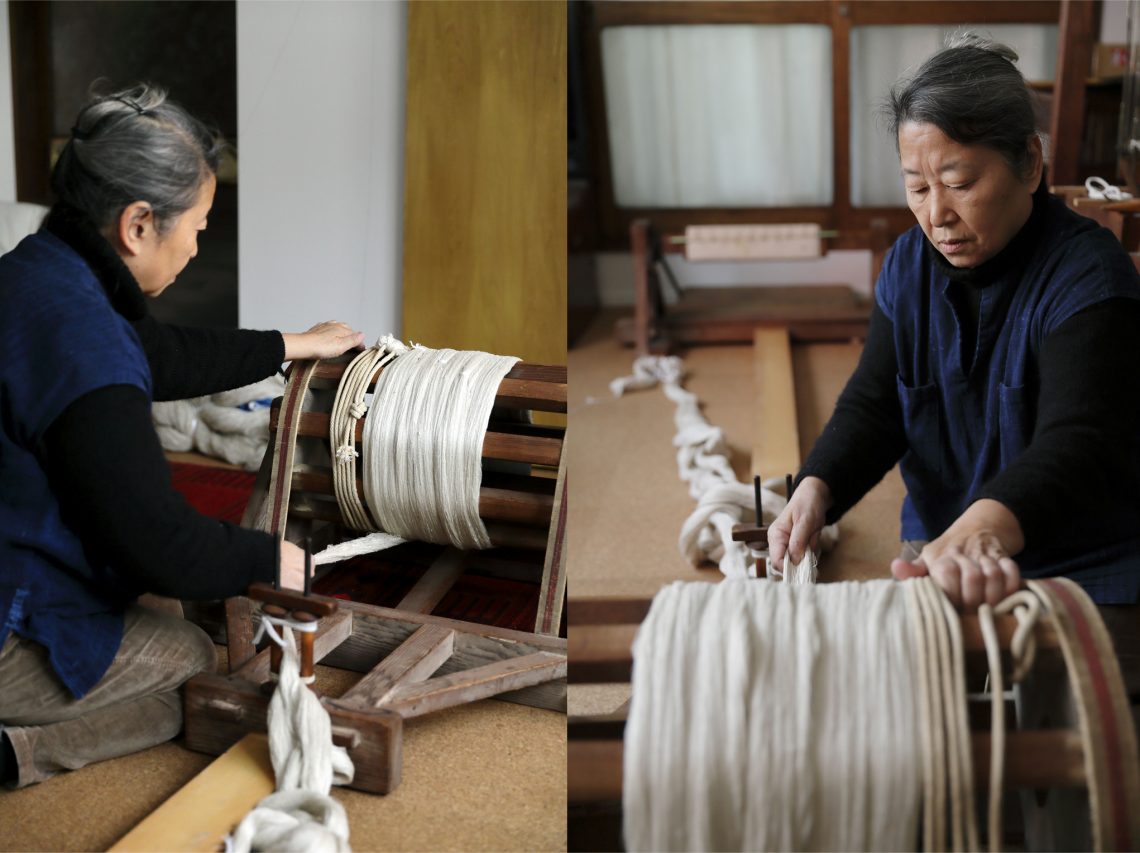 Use the big “warp winding device (tatemakidai)” equipment to wind the warp by adding tension to the thread.

This “warp winding device (tatemakidai)” has 16 meters in total length. Therefore, it needs to have space to setup the device. Also it weighs a lot. It is hard to set it up, but just by looking at Ms. Oguma using it, it tells that the work itself is also hard. Tension must be added while winding the warp, otherwise it will be difficult to weave and it may lead to have a twisted look to the finished form fabric. 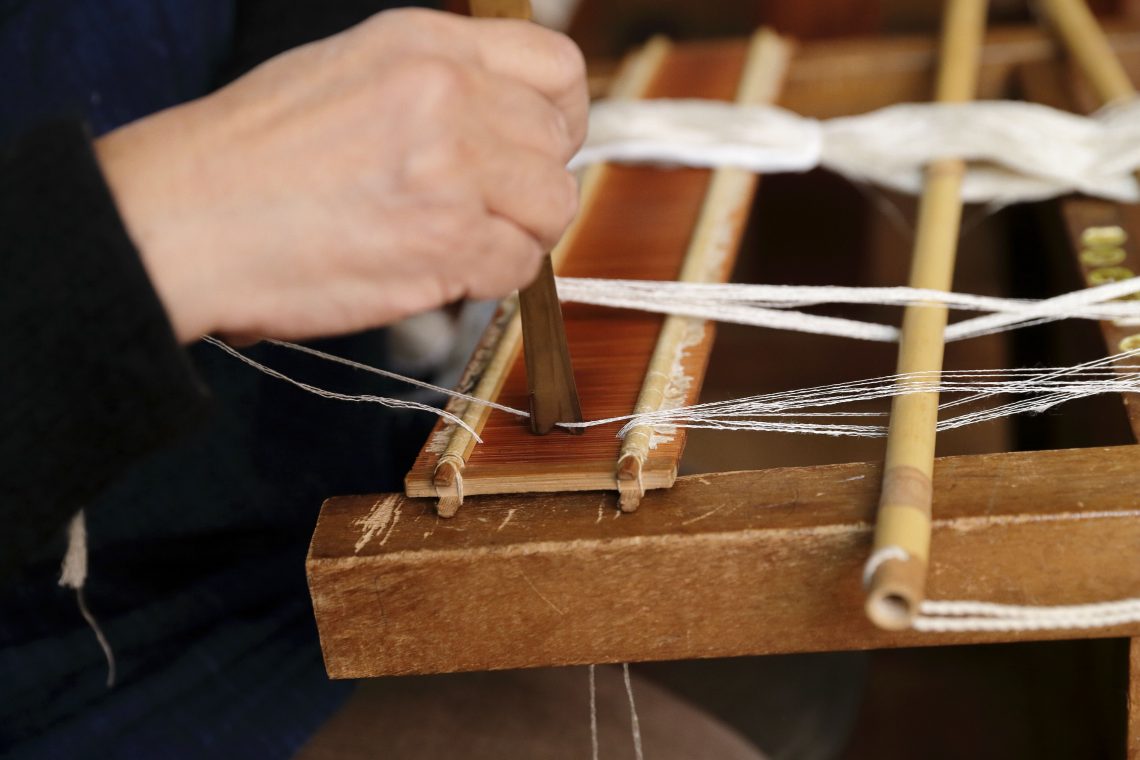 The wound warp using a “warp winding device” is set under the “hand weaving loom.” The threads are passed through the loop that is on the tip of a metal bar which hangs under the “hand weaving loom” called a “heddle (soukou).” Then finally it reaches to the final stage of weaving preparation, “reed passing (osatoshi).” The tool “reed” has a role of keeping the width of the fabric and a role as a hammer. The hammer makes the clucking sound of the weaving loom. In the “reed” there is a space called “reed bar.” 2 threads are passed through the reed bar. 1,200 threads are used in total. Even if the process is at the final stage, it still takes time to get the work done. We asked Ms. Oguma how much preparation time is required to get the preparation done. She said it takes a whole day until to reach and finish the “reed passing.” 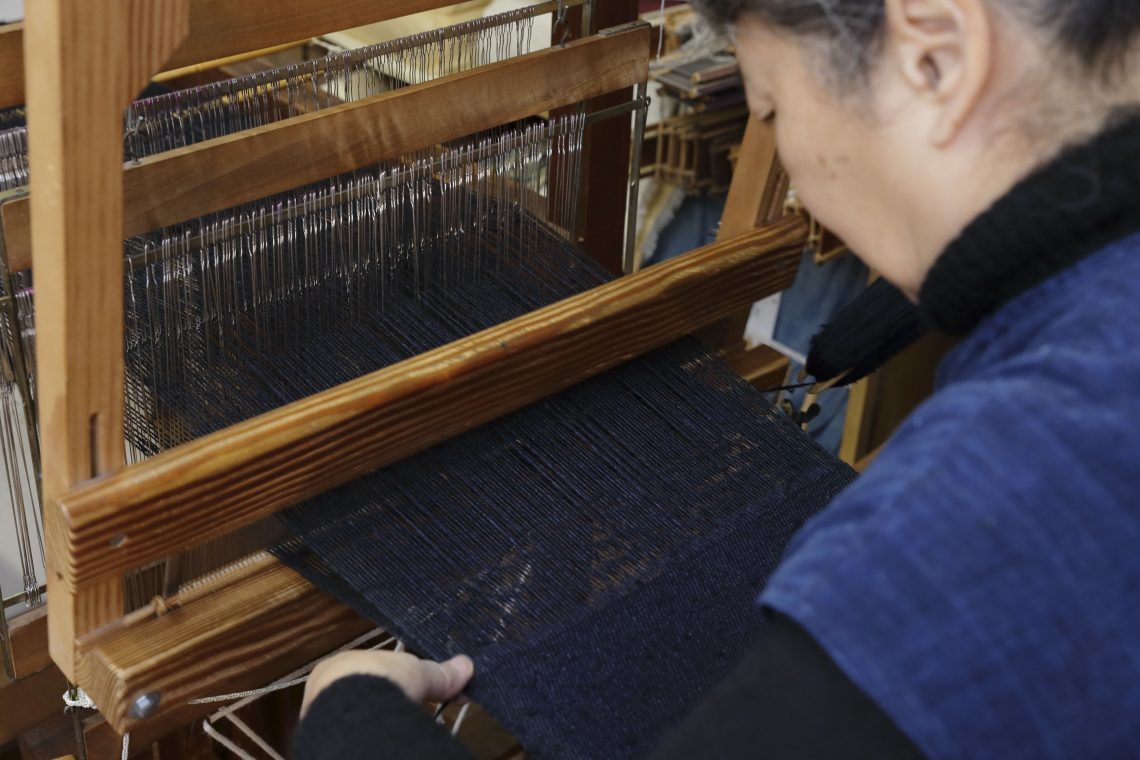 The metal bar shown in the far side of the picture is a “heddle” and the one shown in the near side is a “reed.”

Tools which were given and tools that are made herself

Dye weaving requires several of tools from big to small. It seems to be difficult to prepare the tools but there are many tools that were given to Ms. Oguma from her dyeing and weaving mates. “Hand weaving loom” is also one of it. This Oshimatsumugi weaving loom was made about 40 years ago. It weighs a lot and it seems to fit very well with Ms. Oguma’s fabric that uses thick threads to weave. In addition she makes many of her own useful tools and “hagoita” is one of it. She made it by making holes on it. There is a saying said to spend time and effort. Being able to look at the series of operation and tools, we were able to know that this handcraft is really made by spending time and effort. 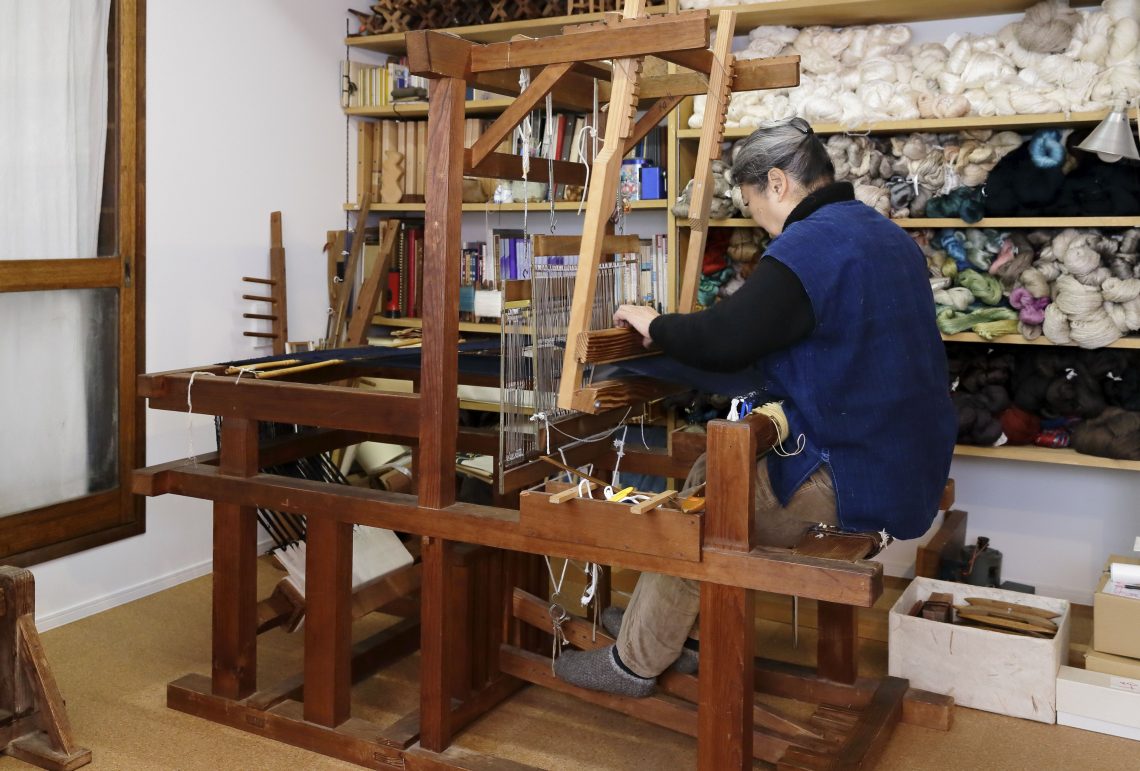 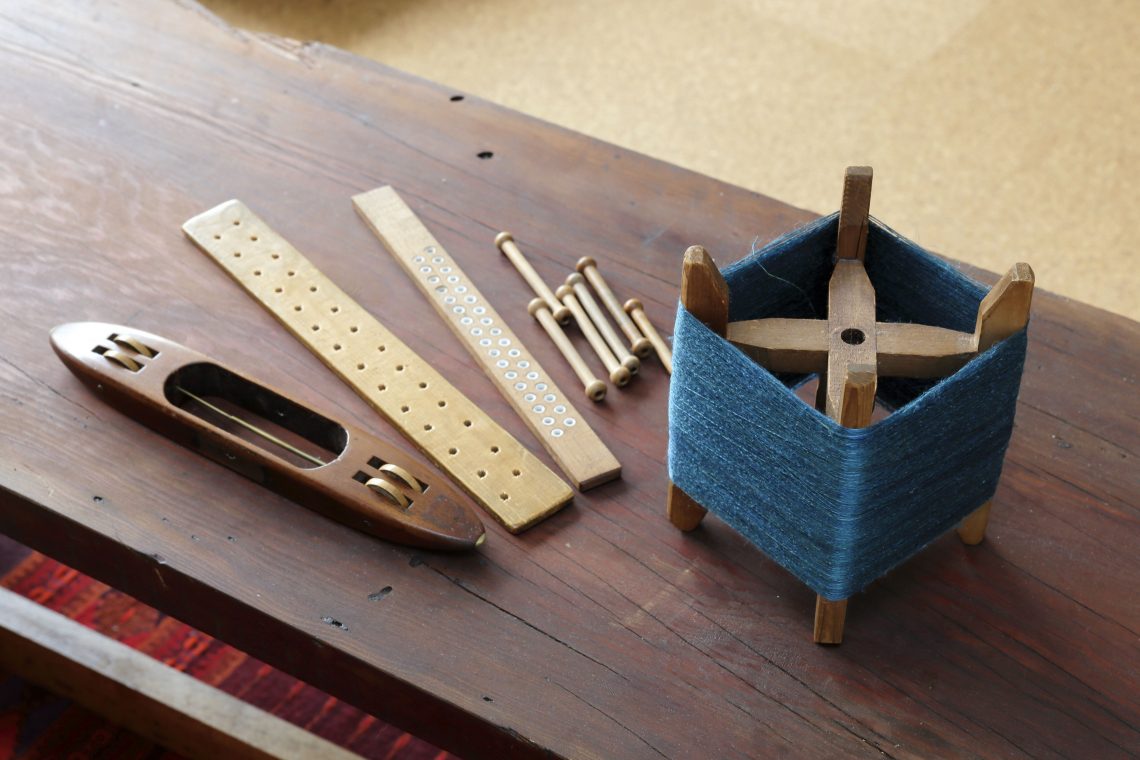 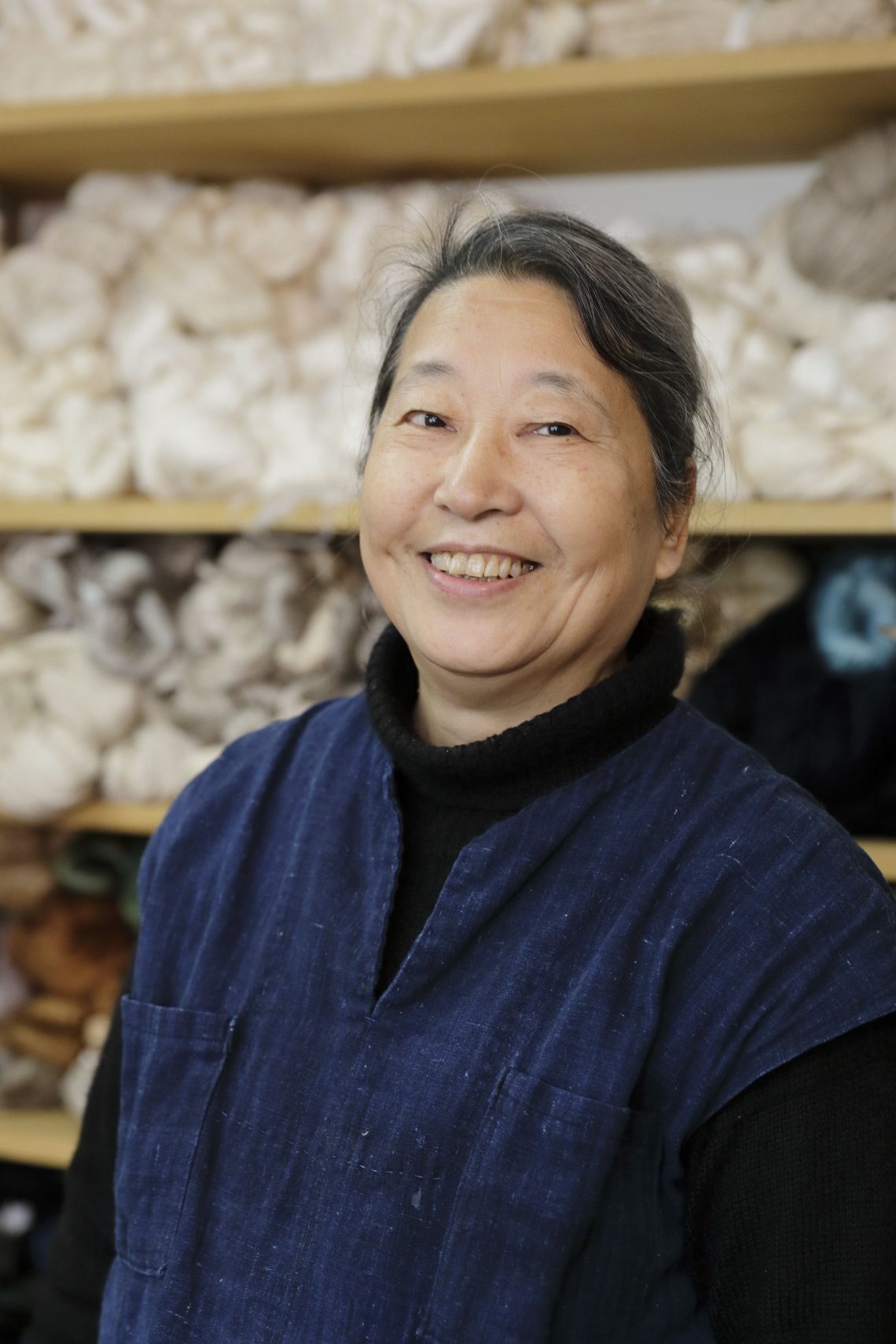 Dye the thread and weave the fabric. Ms. Oguma, a dyeing and weaving specialist who performs many divisions of process all by herself.