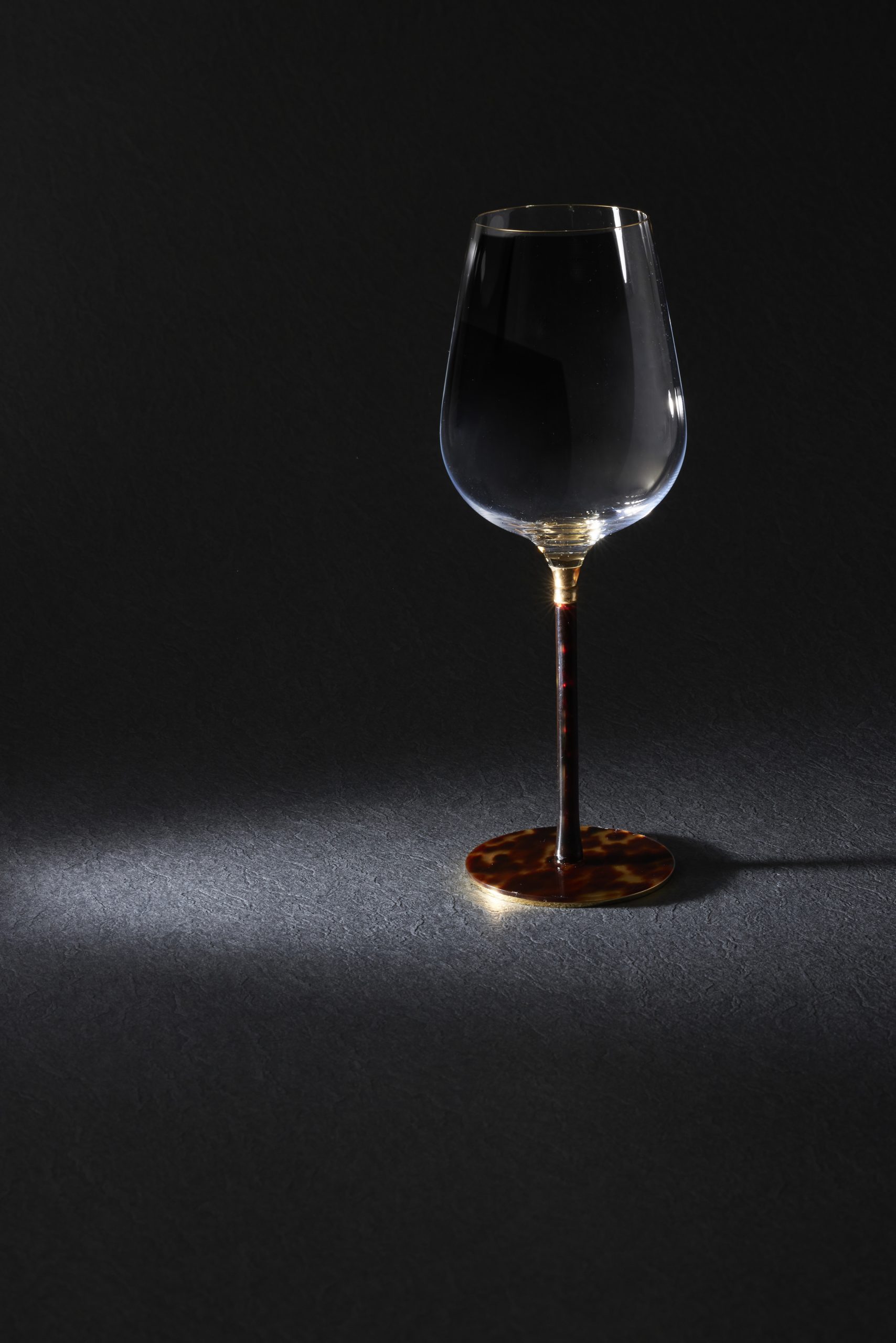 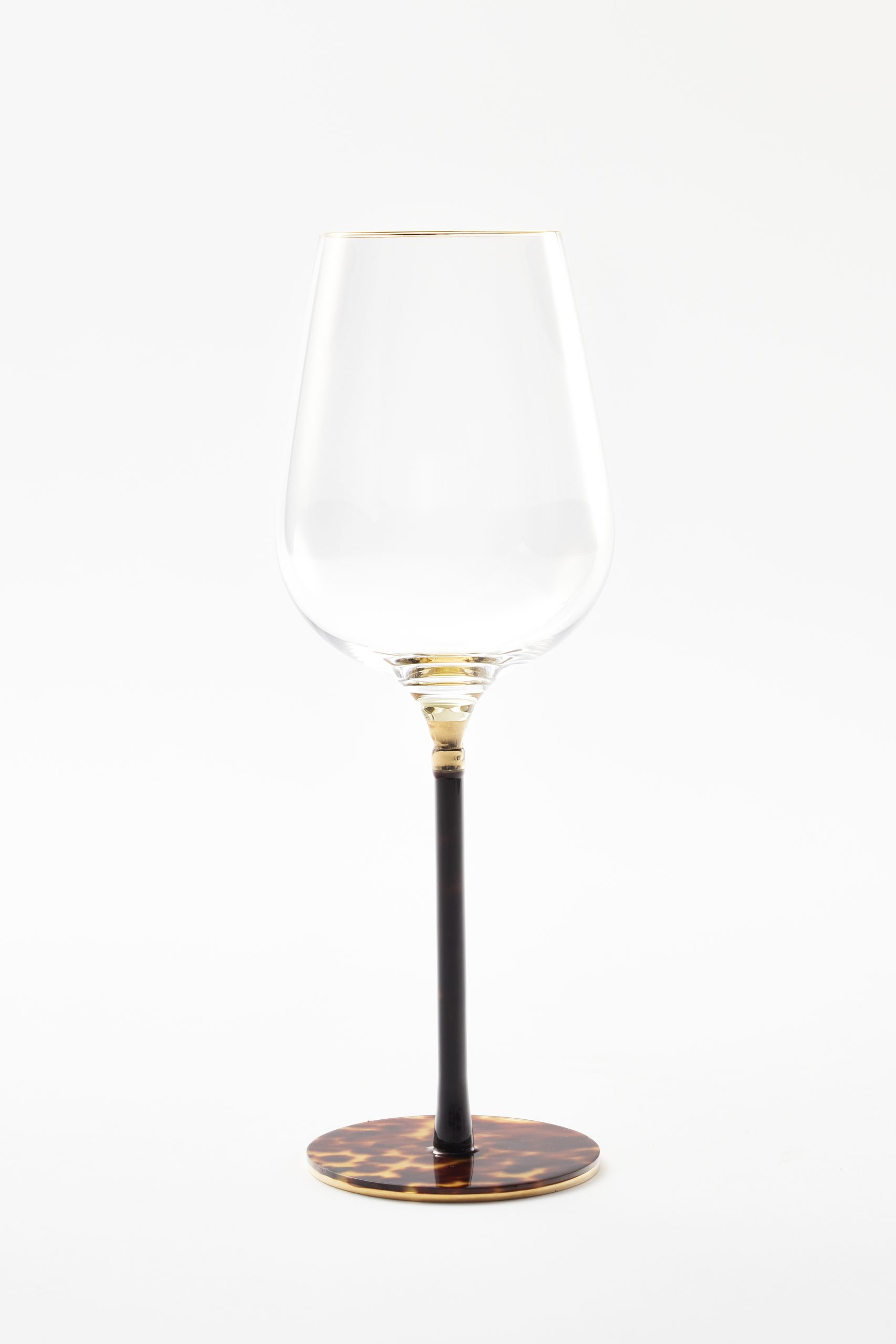 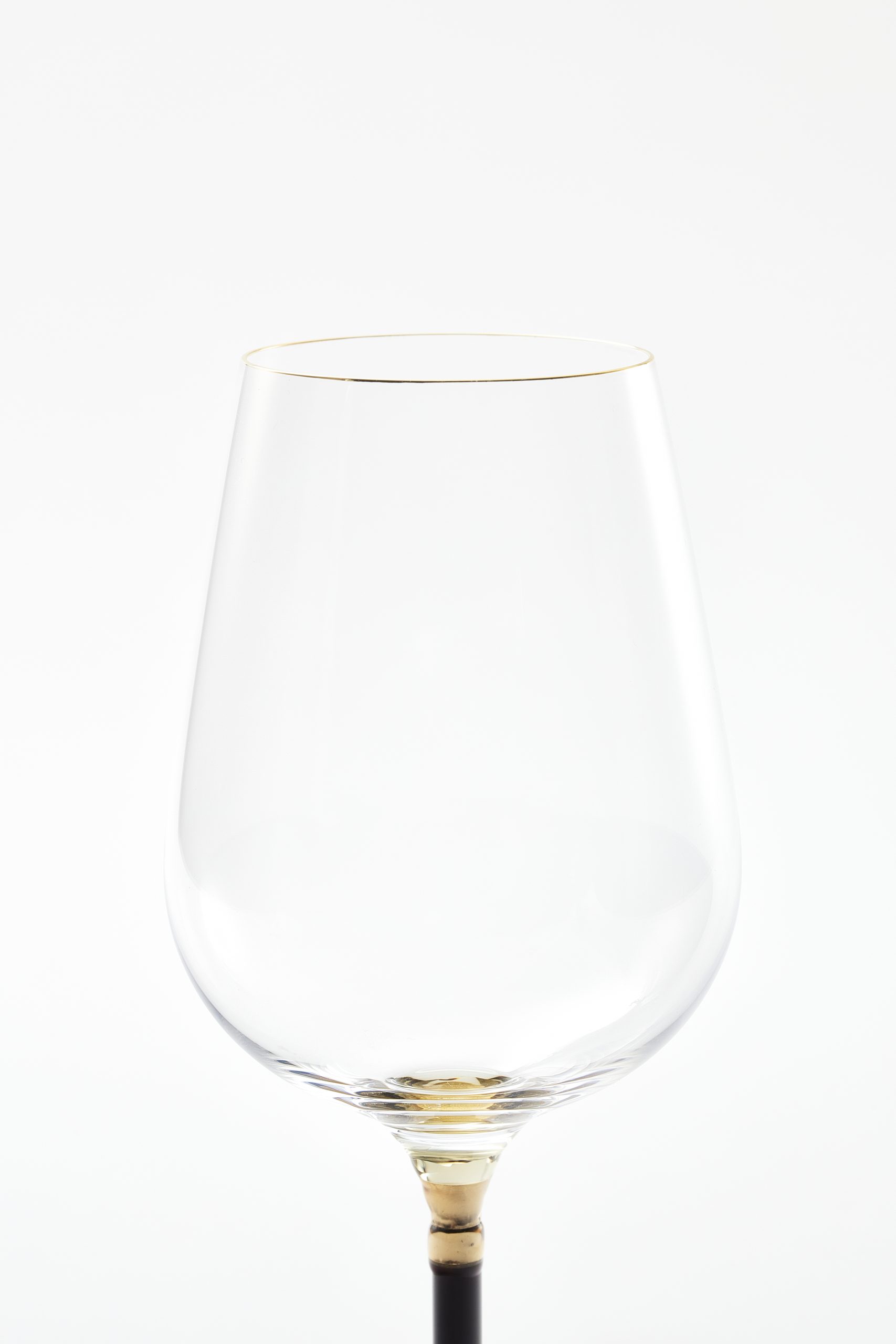 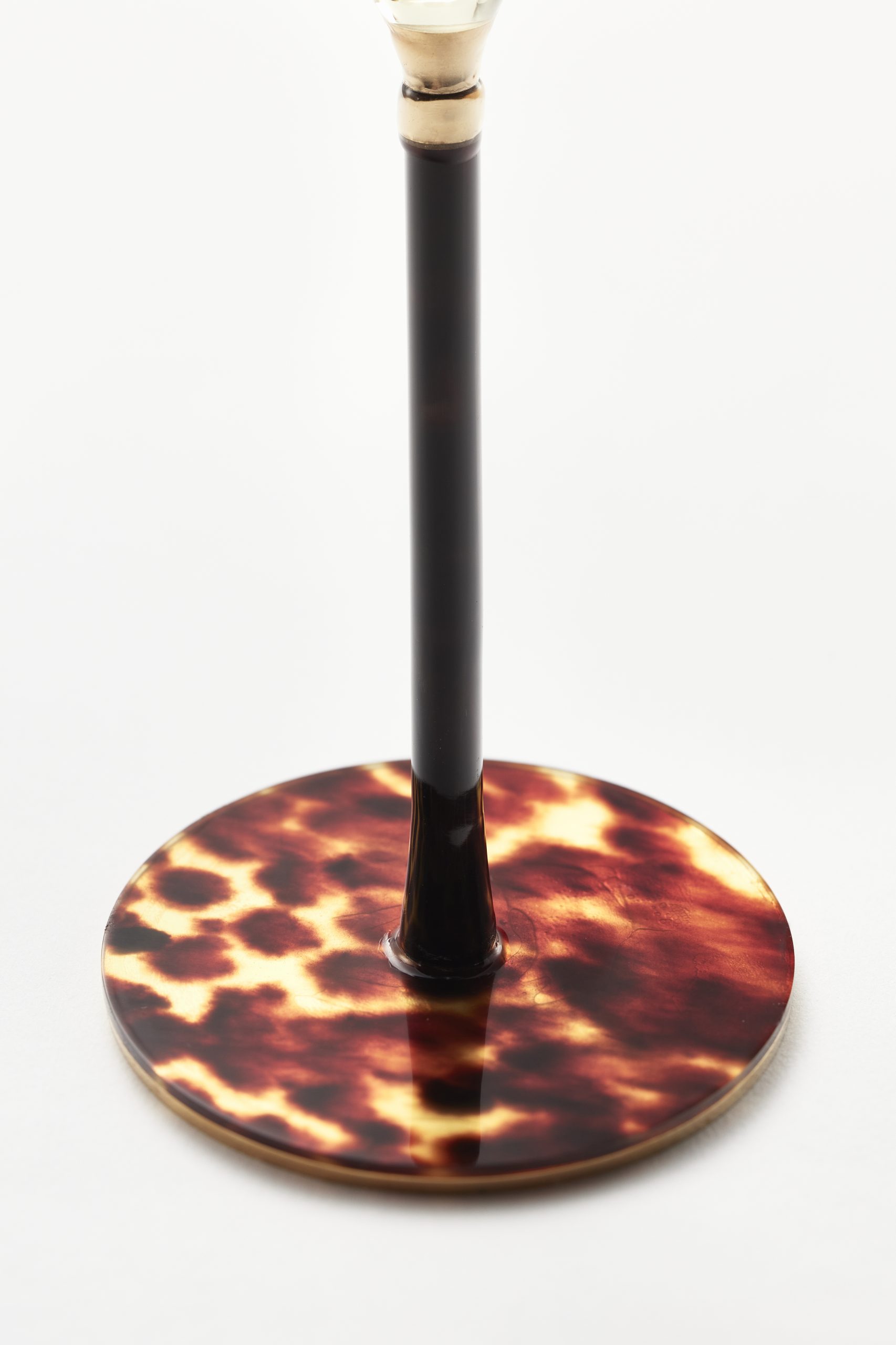 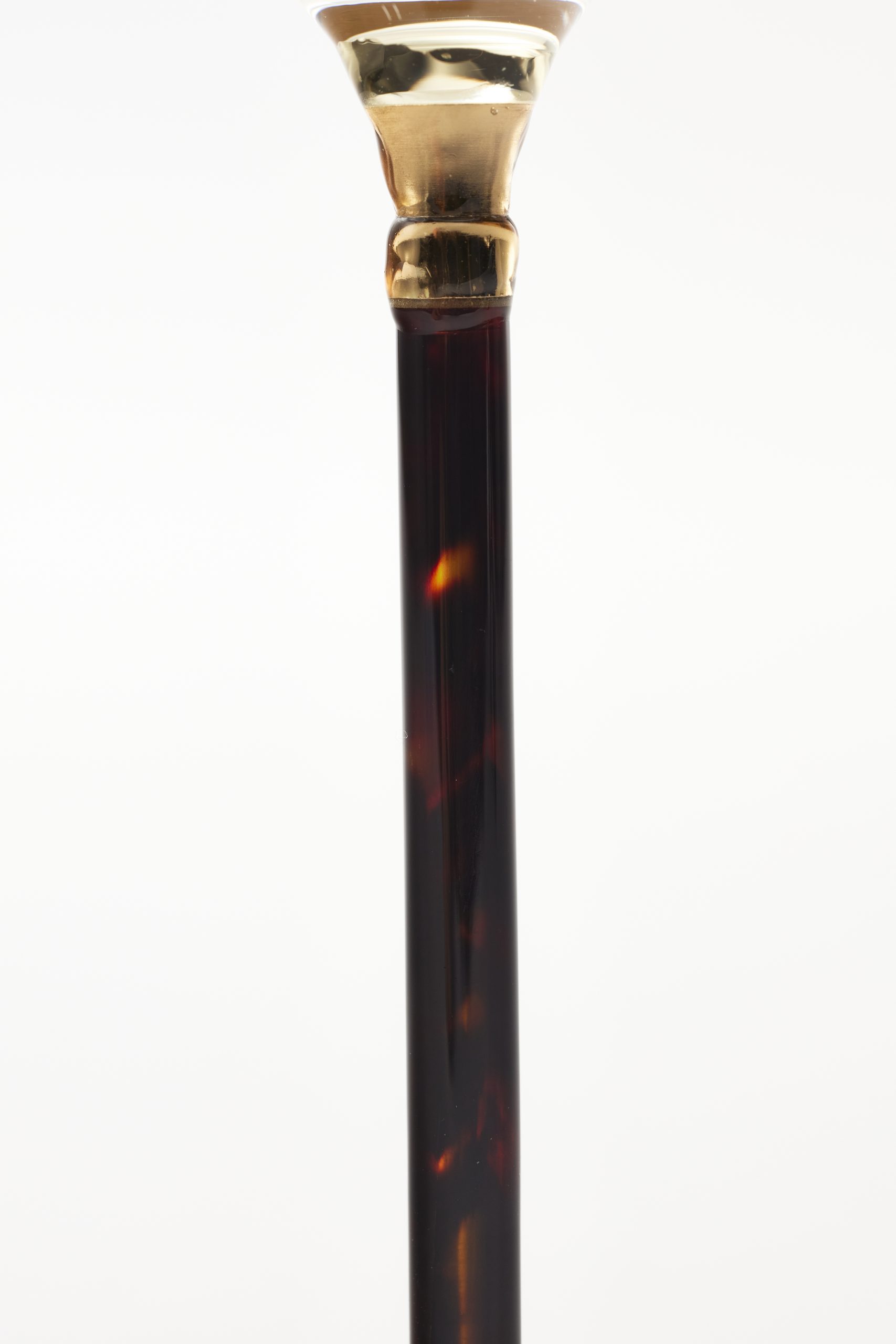 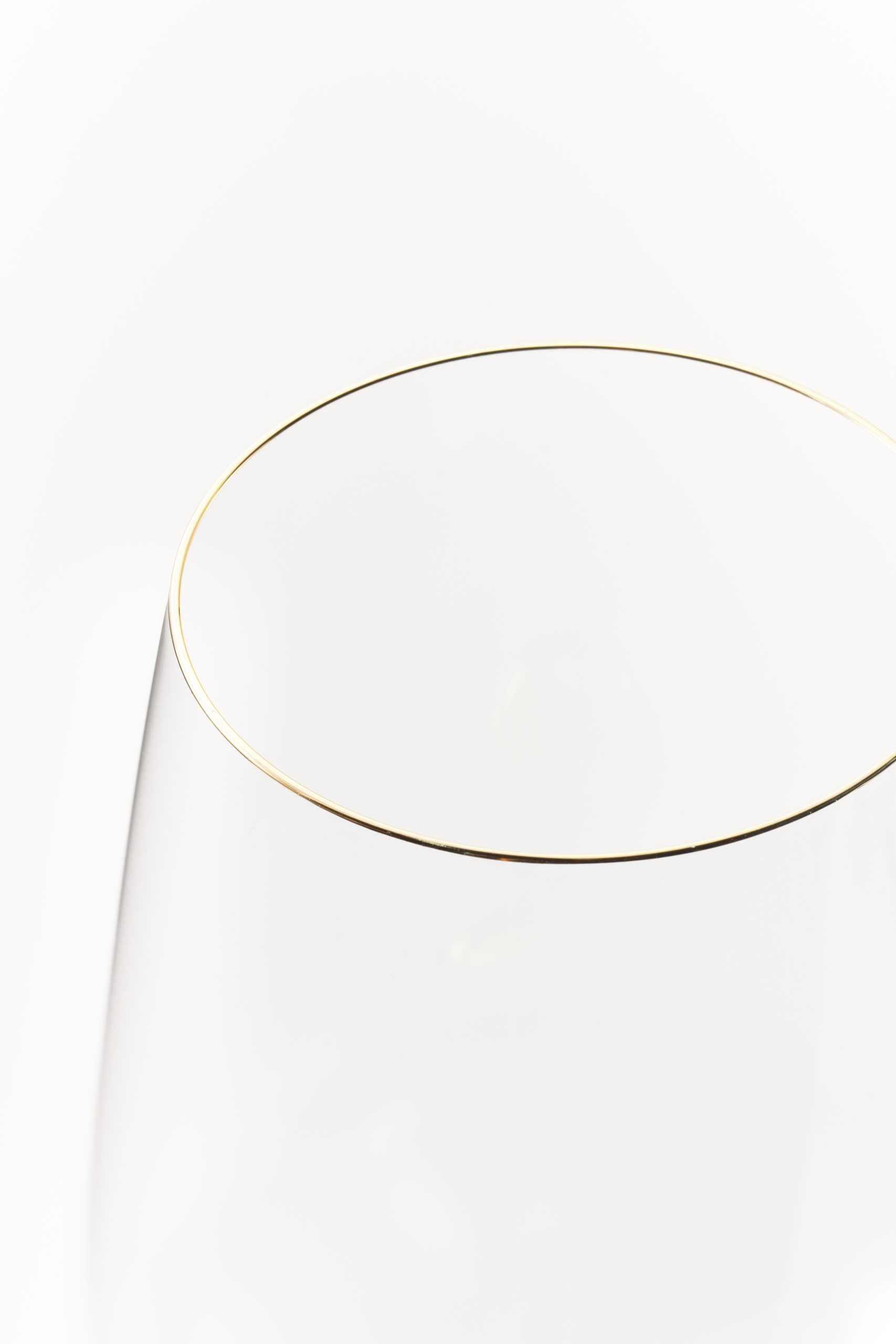 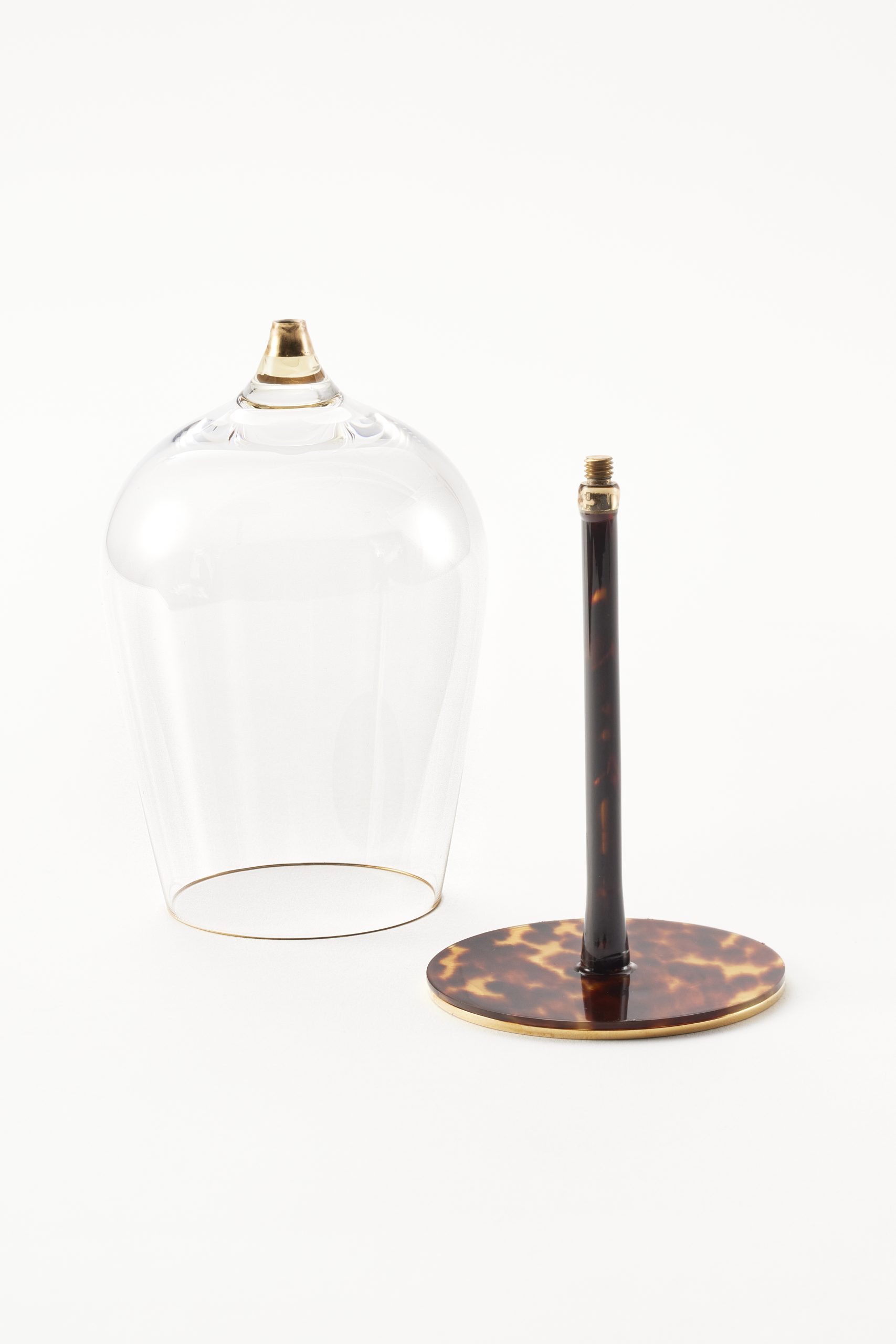 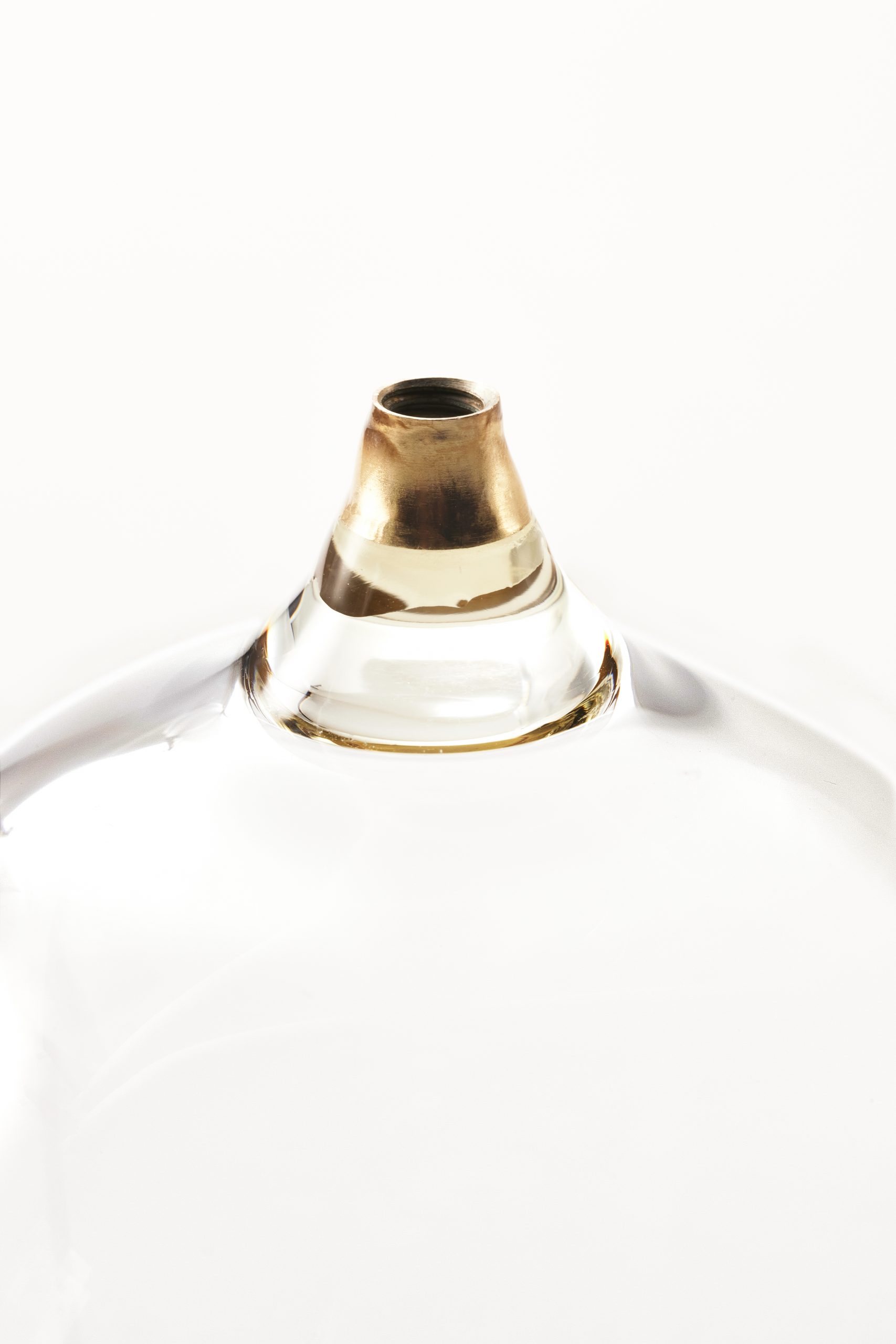 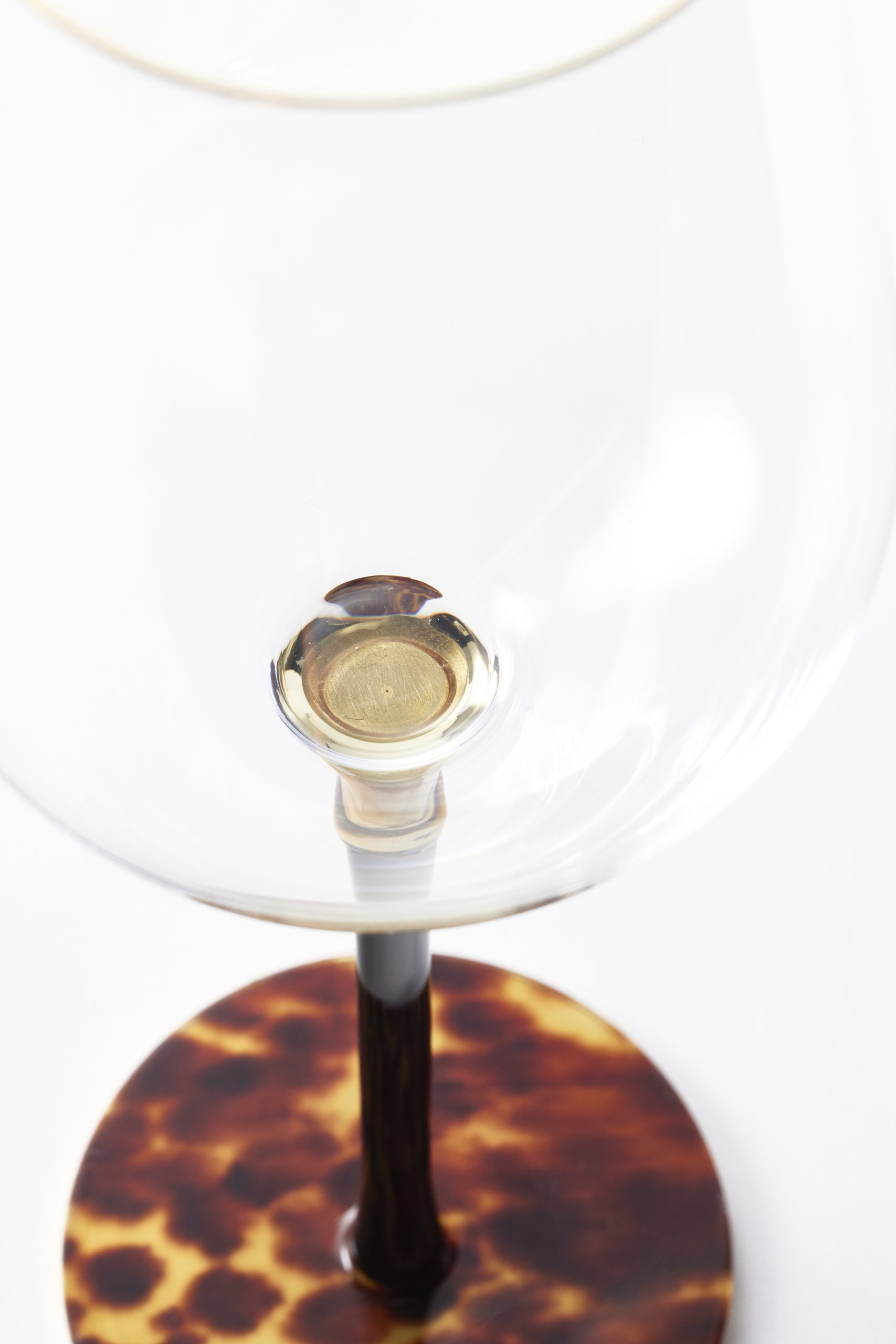 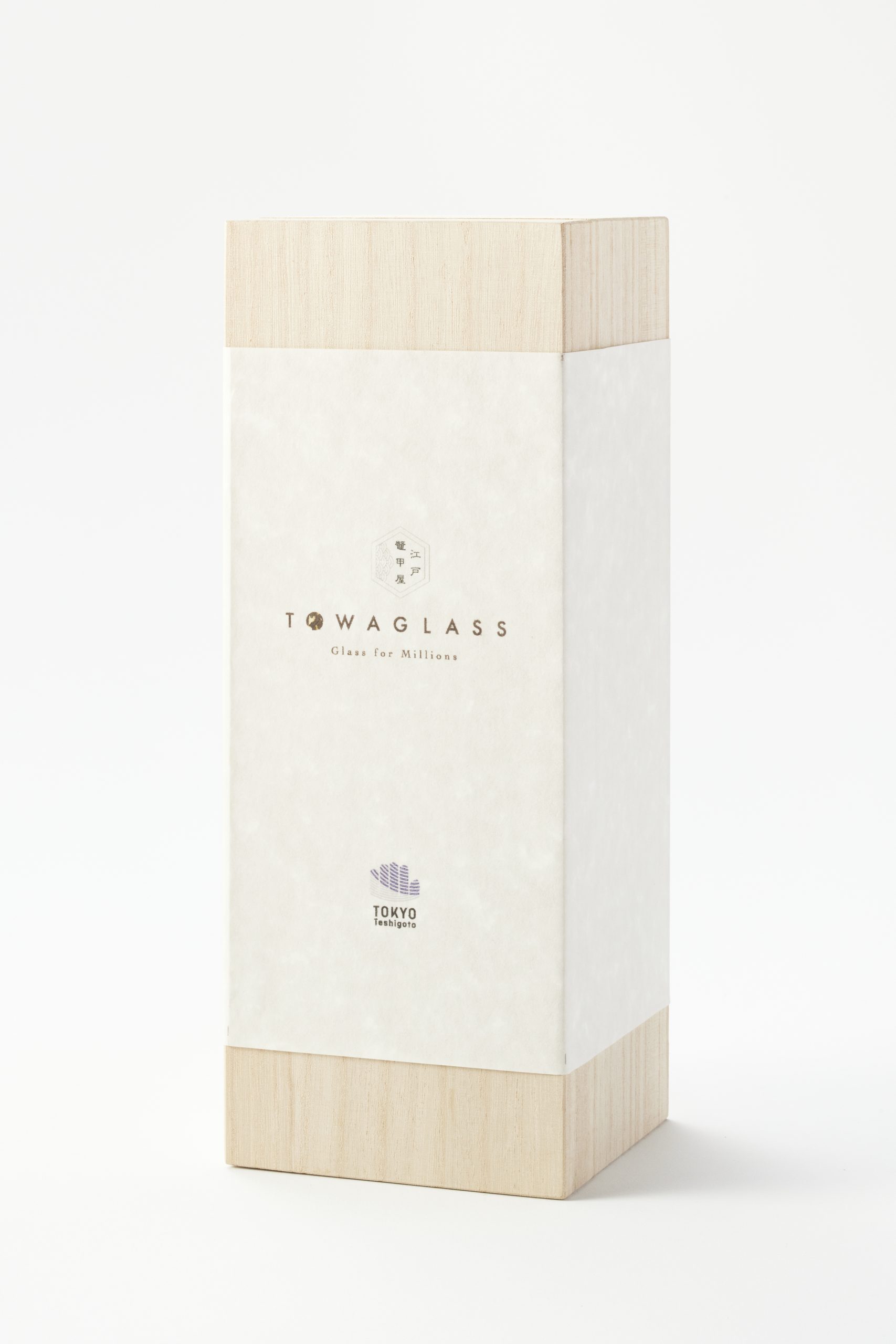 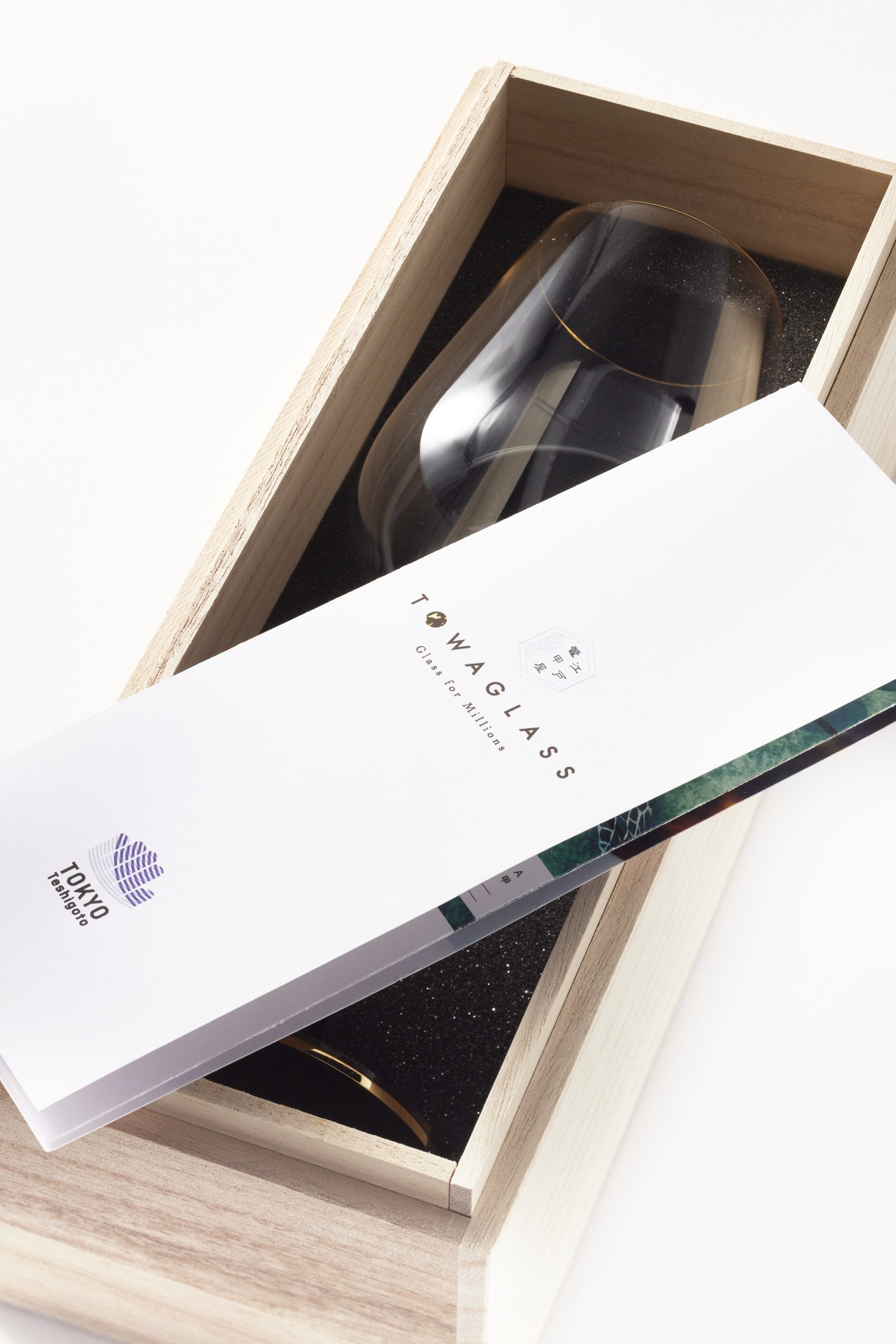 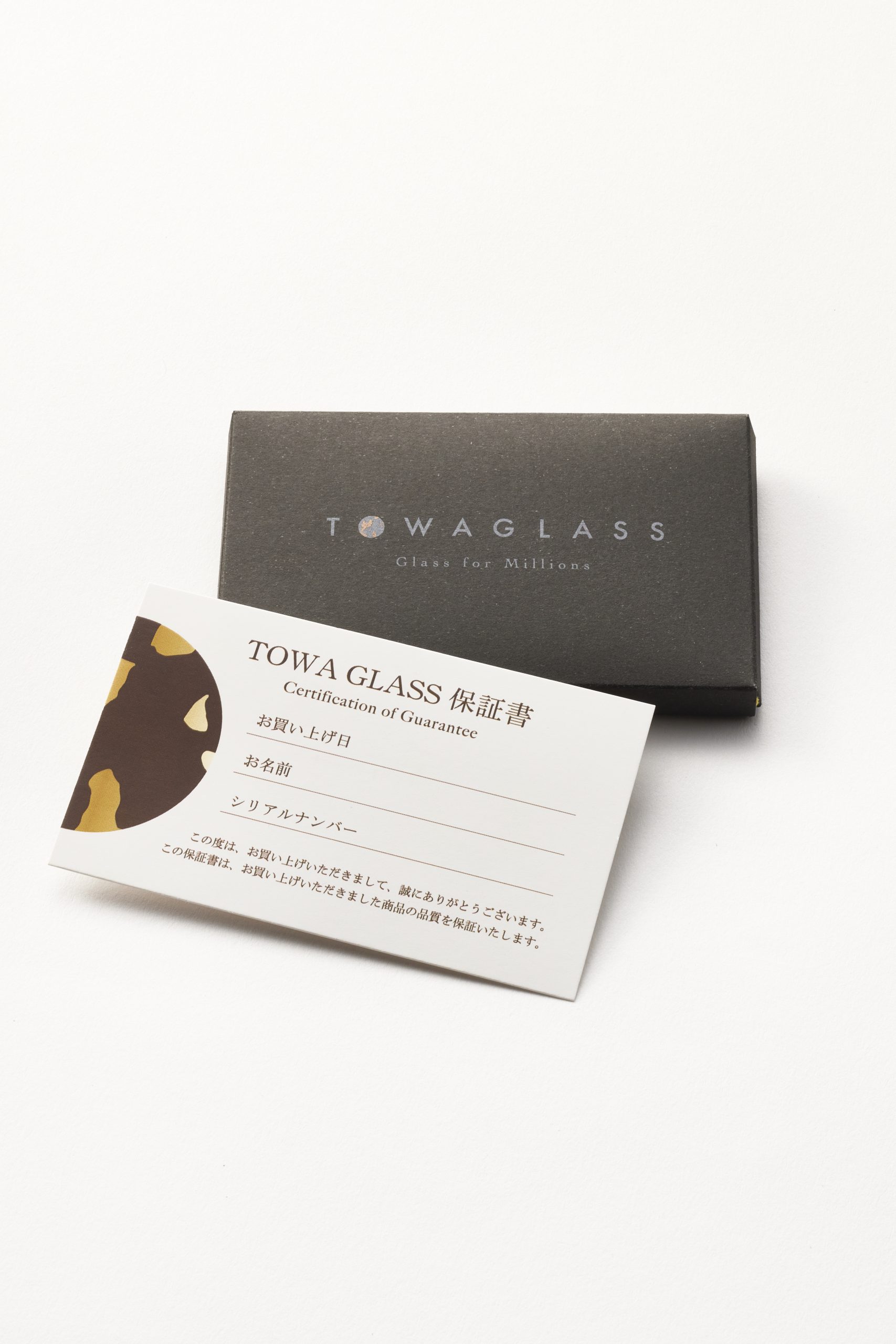 TOWA GLASS is an unprecedented tortoiseshell product made with the use of tortoiseshell processing know-how carried on from the Edo period.
Tortoiseshell is typically used for hairpins, eyeglass frames, timepieces, and other such accessories. Kotaro Ishikawa, the seventh head of Ishikawa Bekko Seisakusho, said that the idea of making a glass using tortoiseshell proposed by the designer Satoru Shimizu interested him as an artisan.

The traditional technique of pasting together pieces of Edo tortoiseshell was fully exercised in the stem of the glass. Ishikawa pasted together dozens of tortoiseshell strips with an ultra-low thickness to the order of 2 millimeters in the shape of a rod. Tortoiseshell has quirks to begin with, and even the task of flattening each strip is a difficult one. Moreover, the tortoiseshell may revert to its original shape with the passage of time. In response, with the cooperation of a business skilled in boring, Ishikawa decided to make a hole with a diameter of about 1 millimeter in the stem and insert a core into it. Although it may look like simply a rod at first glance, the stem was made with a mind-boggling expenditure of time and effort as well as the application of sophisticated techniques.

The even more innovative feature of TOWA GLASS is the fact that the glass part is detachable. Besides making it easier to clean the glass, this allows customers to change the glass to suit the type of wine, whether red, white, or sparkling, by buying different glasses that are sold separately.

The detachable glass part was made possible by the skills of first-rate Japanese manufacturers in the areas of glass production, metal processing, bonding, and so on. Born of collaboration among four companies, TOWA GLASS is truly a crystallization of the wisdom and know-how of small and medium Tokyo enterprises.

The towa in TOWA GLASS means “forever.” Using tortoiseshell, a symbol of longevity, this glass is imbued with the hope that its owners will long be able to continue savoring the joy that comes from using it. The glass adds a glimmer of happiness to the occasion and is perfect for a toast.