Explore the secret of a “copper grater”, a longtime best seller product of “Edoko Teshigahara factory”!

A “copper grater” well-reputed among foodies

What kind of tools do you normally use to grate condiments such as Japanese radish and ginger?  You might use a “plastic”, aluminum or other “metals”, or a saucer-type “ceramic” grater, or a “wooden” grater if grating a Japanese radish coarsely.  The “copper grater” of “Edoko Teshigahara factory” is literally “made of copper”.  There is tin applied on the surface of the copper board to prevent the grater from oxidizing.  The edges are standing sharp, with barbs on both sides to allow the radish to be grated when lodged this way and inversely from that way.  The surface with large blades is for grating Japanese radish and the backside with small blades is for grating Japanese horseradish and ginger.  The “copper grater” of Edoko has an extremely good reputation for making “fluffy grated Japanese radish” and “creamy grated ginger”.

The description of a “copper grater” can already be found in a book called “The Illustrated Sino-Japanese Encyclopedia”, which was compiled during the middle of the Edo Period.  As you look at the section of a “Japanese horseradish grater”, there are drawings of graters with a board widening toward the end.  It is described that they had blades on both the surface and the backside.  There is also a note saying that “the Japanese horseradish grater shall be made using copper”.  This means that the “copper grater” of Edoko has almost the same form as the grater in the Edo Period to still make us smack our lips.

The Illustrated Sino-Japanese Encyclopedia, Volume 1/reprinted from the website of the National Diet Library

Application of tin and toothing have been done manually

The manufacturing process of the “copper grater” of Edoko is almost entirely manual.  The process of cutting out the copper board into the form of a battledore board has now been outsourced to the pressing plant, but Edoko used to do that by themselves before.  They also manually apply tin on the battledore board-shaped copper board.  We visited the workshop of Edoko Teshigahara factory” to see the process of applying tin and toothing. 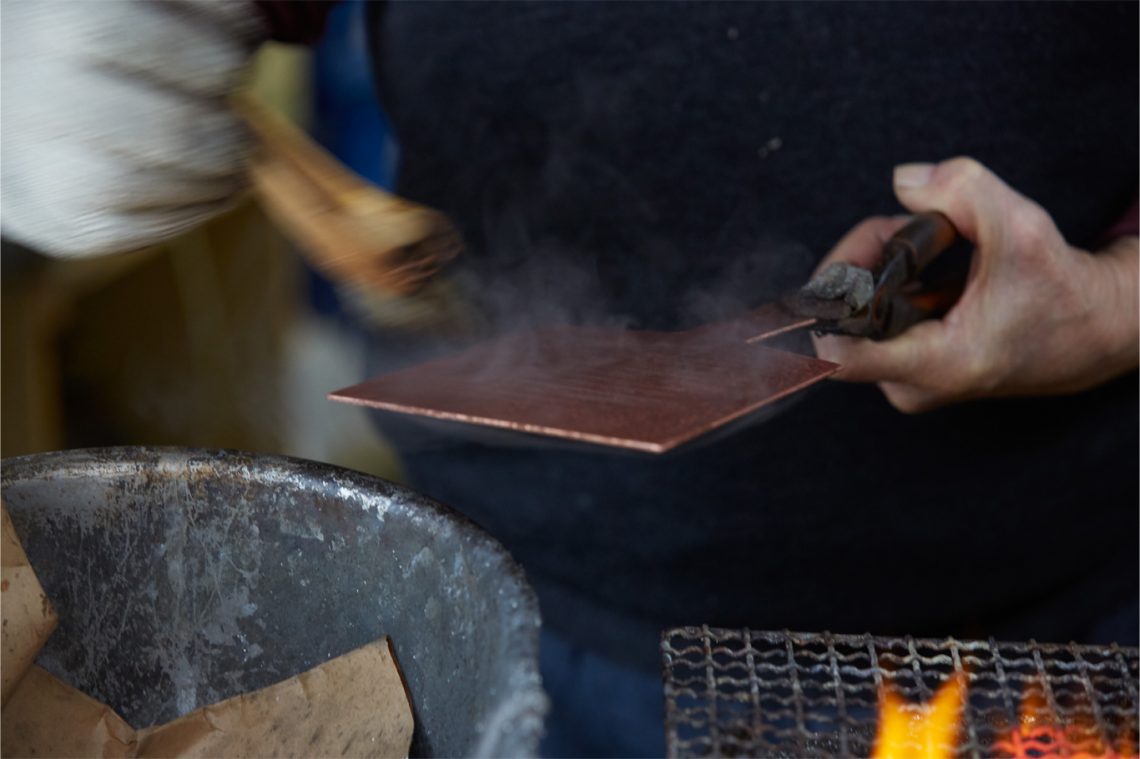 The surface of the copper board will first be cleaned. 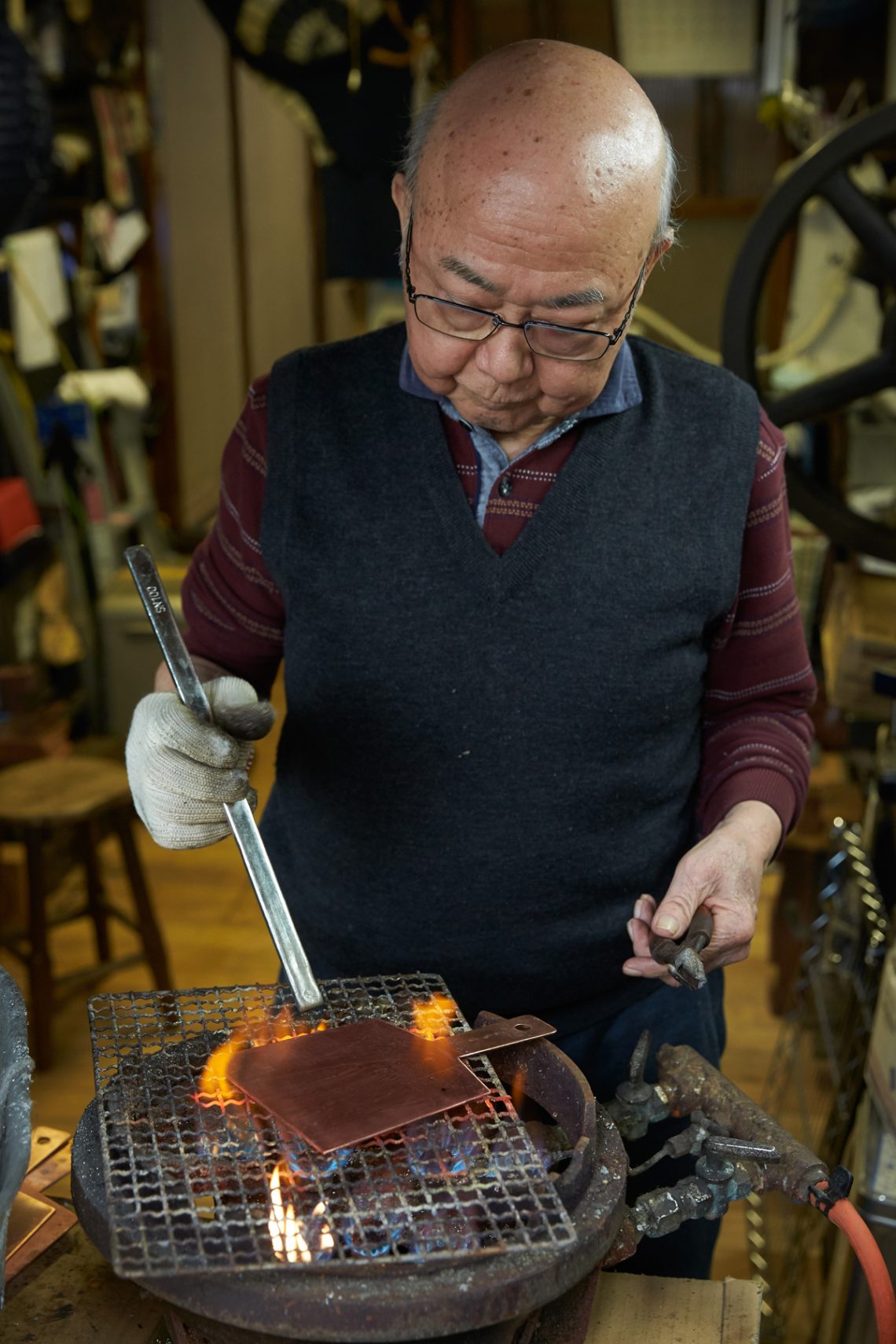 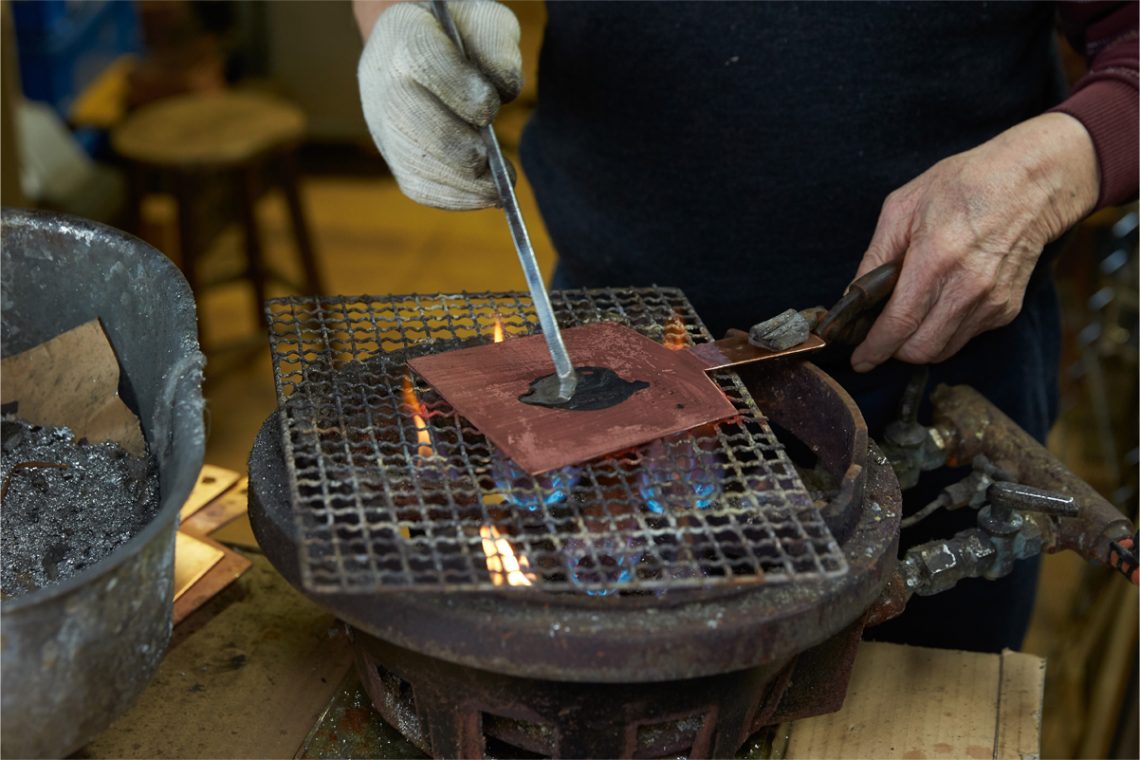 As the tin in the form of a stick touches the copper board, it melts and spreads in an instant. 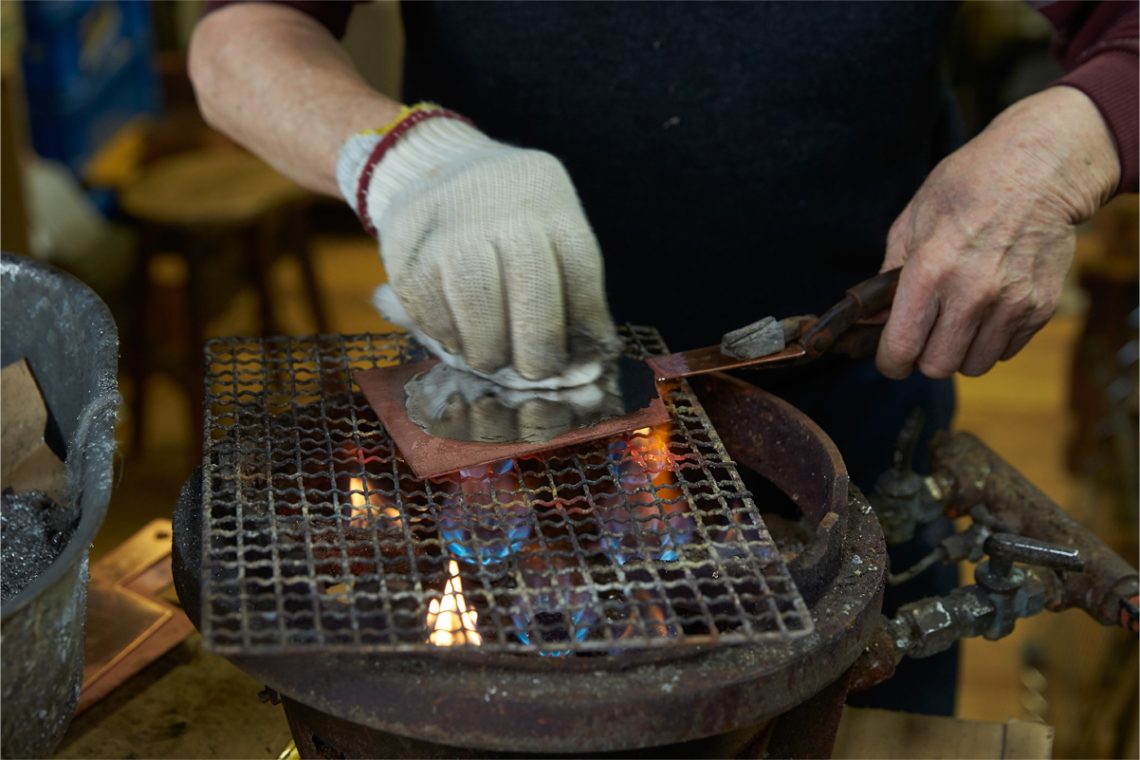 The tin will be evenly spread on the surface using cotton. 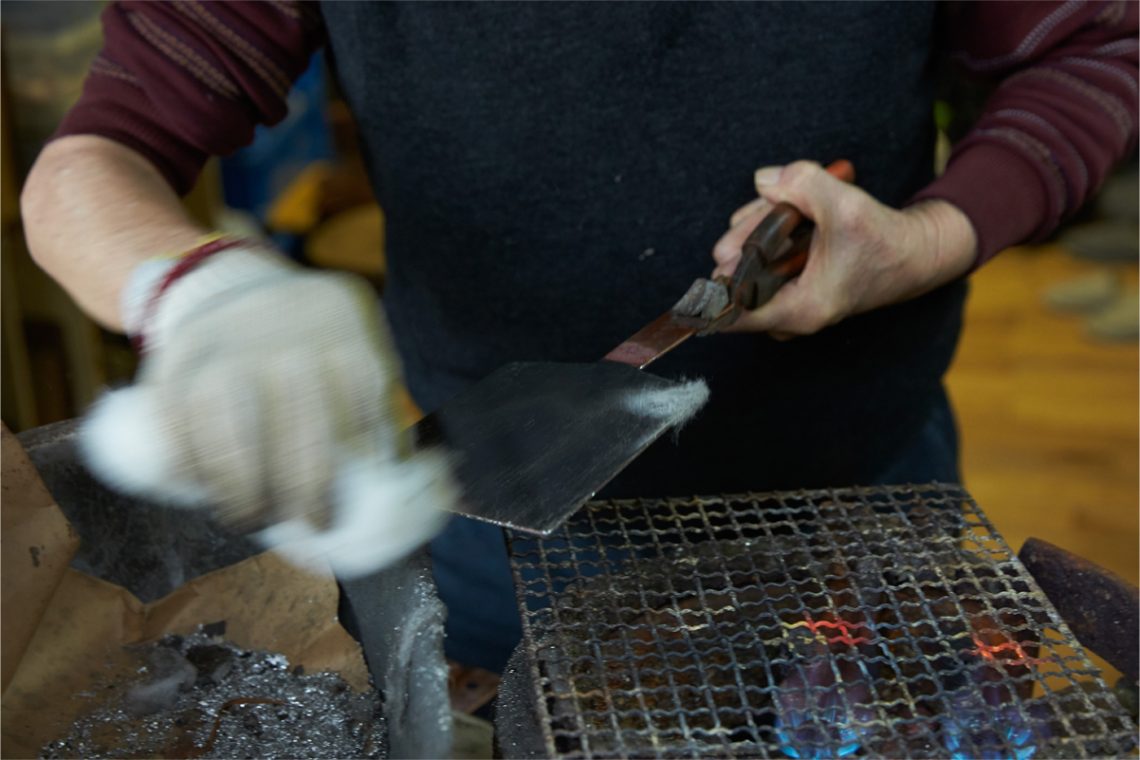 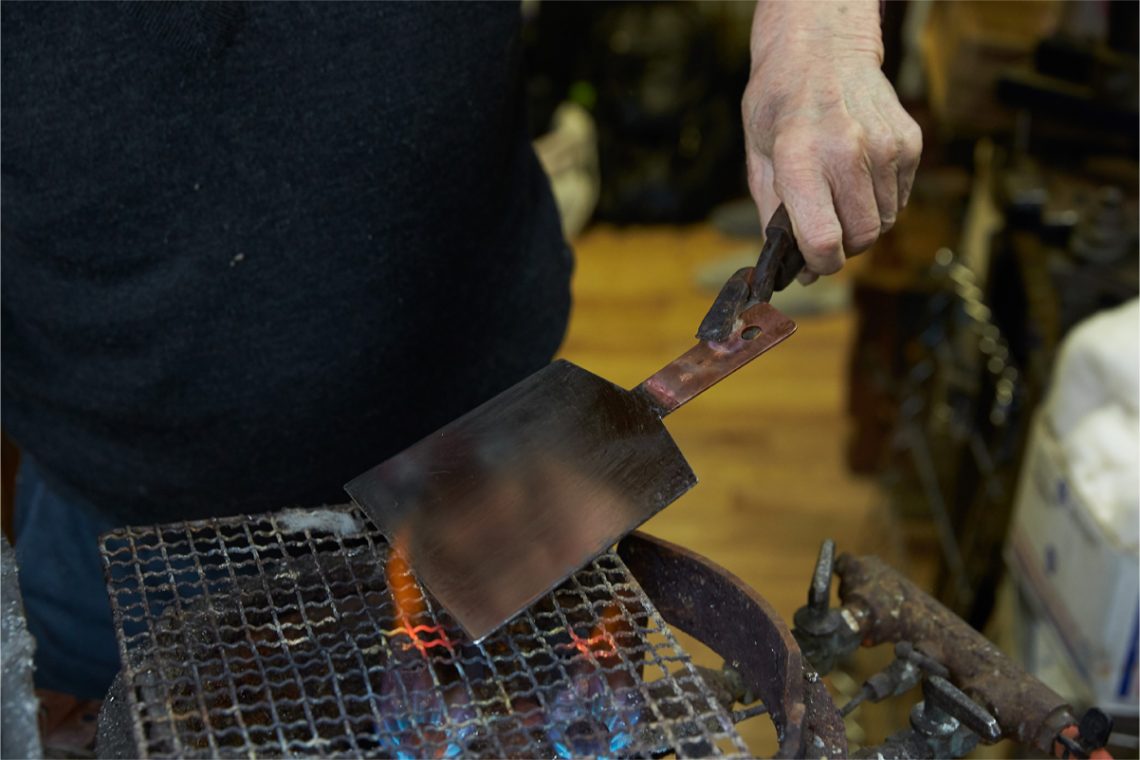 As you remove the redundant tin, the board surface will be as smooth as a mirror. 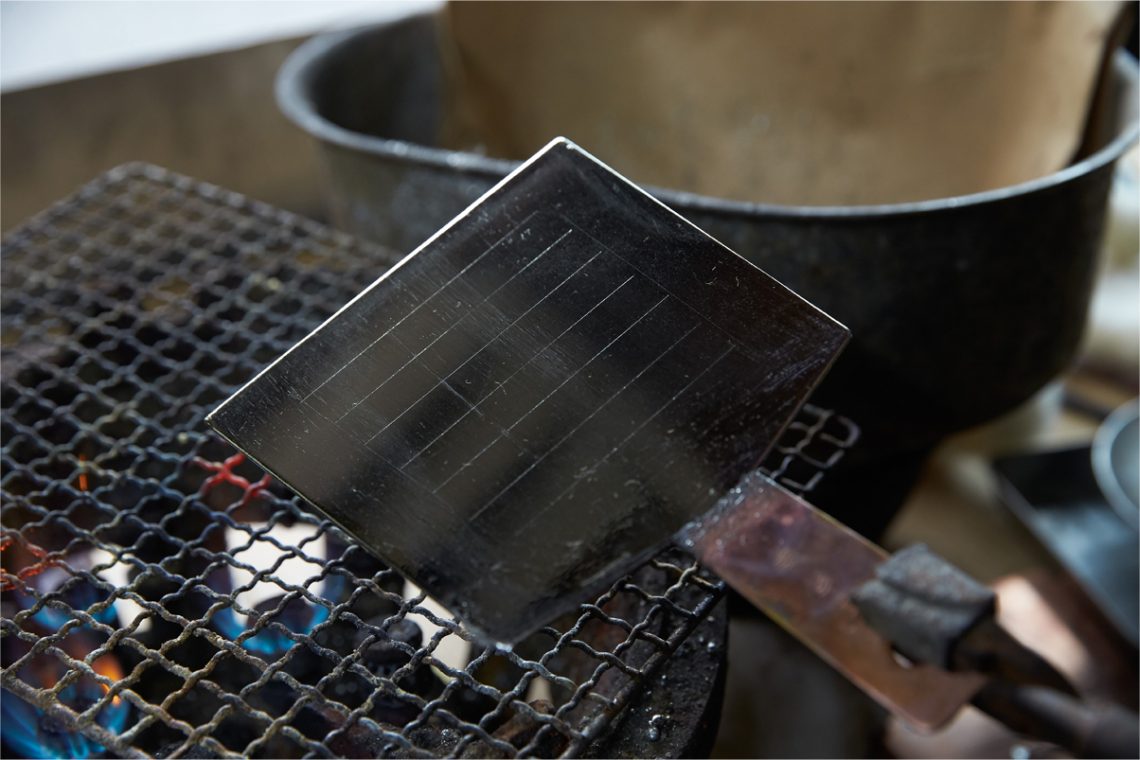 The toothing is designed with various ingenious ideas

Something called a “steel chisel” is used for the toothing.  “Steel chisels” are used by the fellow craftsmen or the craftsmen of other types of work.  However, Mr. Teshigahara has and uses many types of “steel chisels”, and the angles of their edges are sharp.  He says that these forms, as well as to keep many of them, are necessary to strike the “steel chisel” into the hard copper board and create sharp blades.  The sharp standing blades will “cut” and grate the food, rather than grind, which allows the texture of “fluffy grated Japanese radish” and “creamy grated ginger”.   As Mr. Teshigahara starts to strike the “steel chisel” into the copper board, the blades are beautifully created with a pleasant rhythm.  According to Mr. Teshigahara, “although the blades do not line up as straight as they would if made by a machine, this is important”.  The grated food will be clogged, if each row of the blades is lined up straight.  As many of you may have experienced, the radish will be watery if you had to clean the clogged radish as you grate.  This is how the “copper grater” of Edoko can prevent the radish from being watery without requiring much of your effort. What he has in his hands are the “steel chisels”. 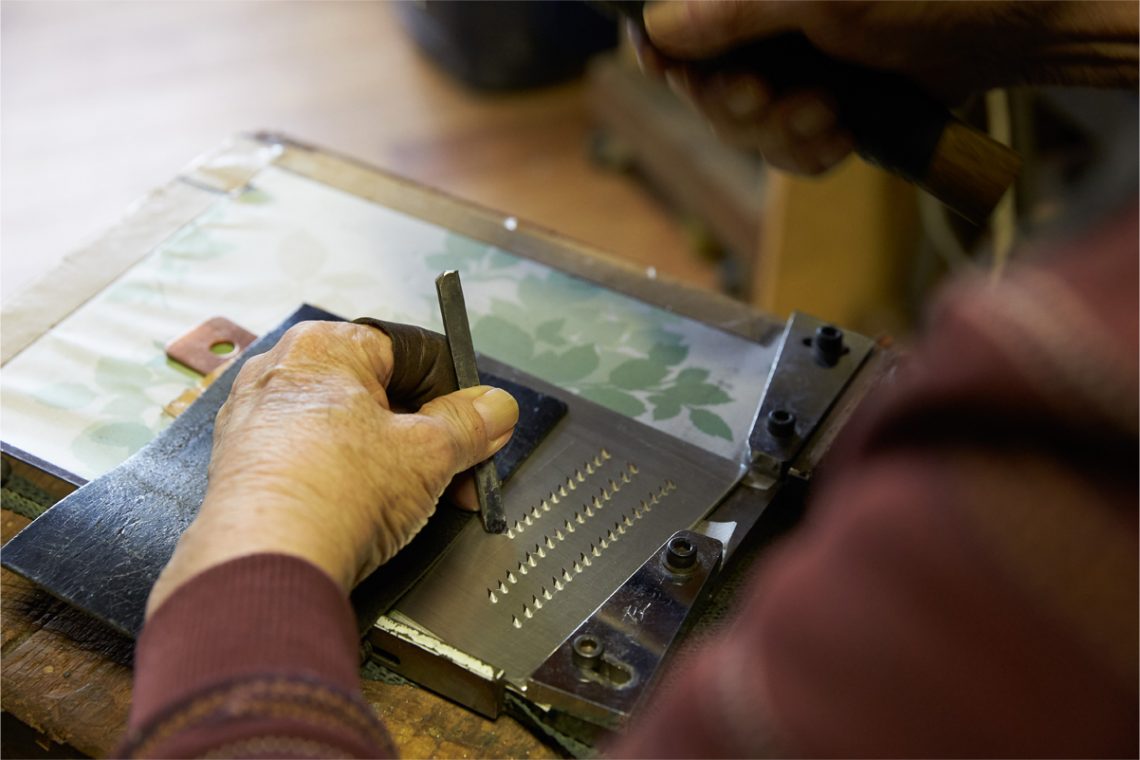 He strikes in the “steel chisels” with a pleasant rhythm. 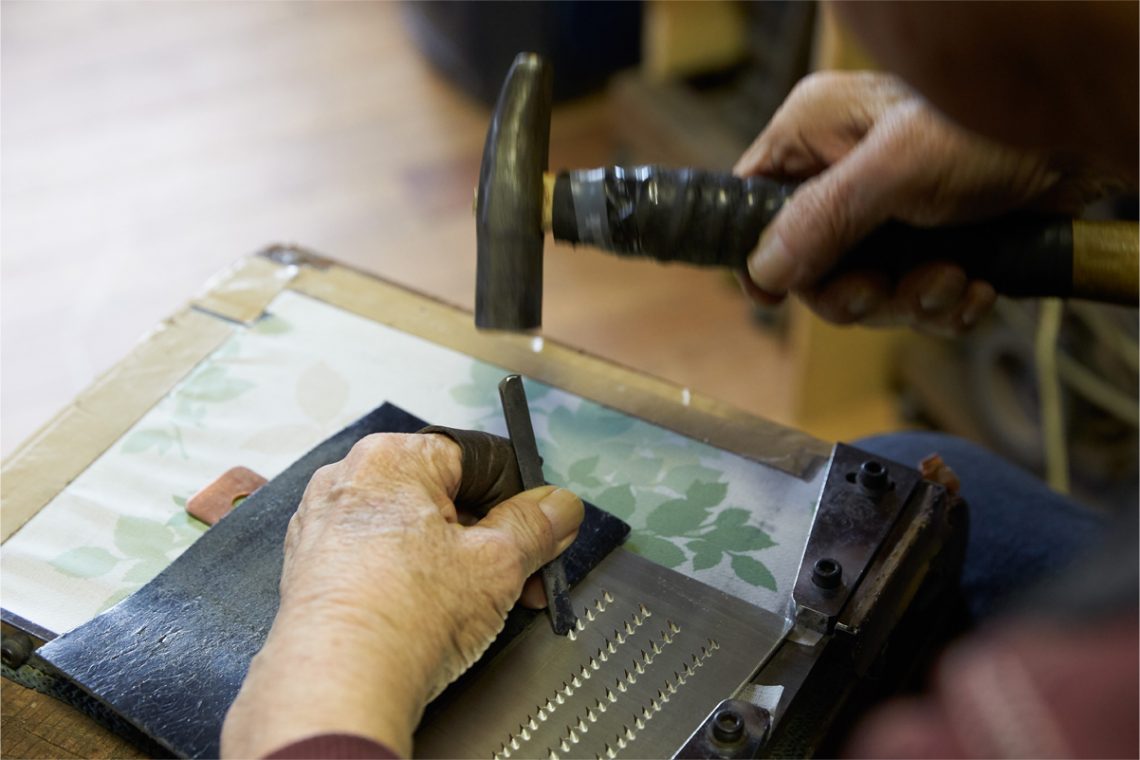 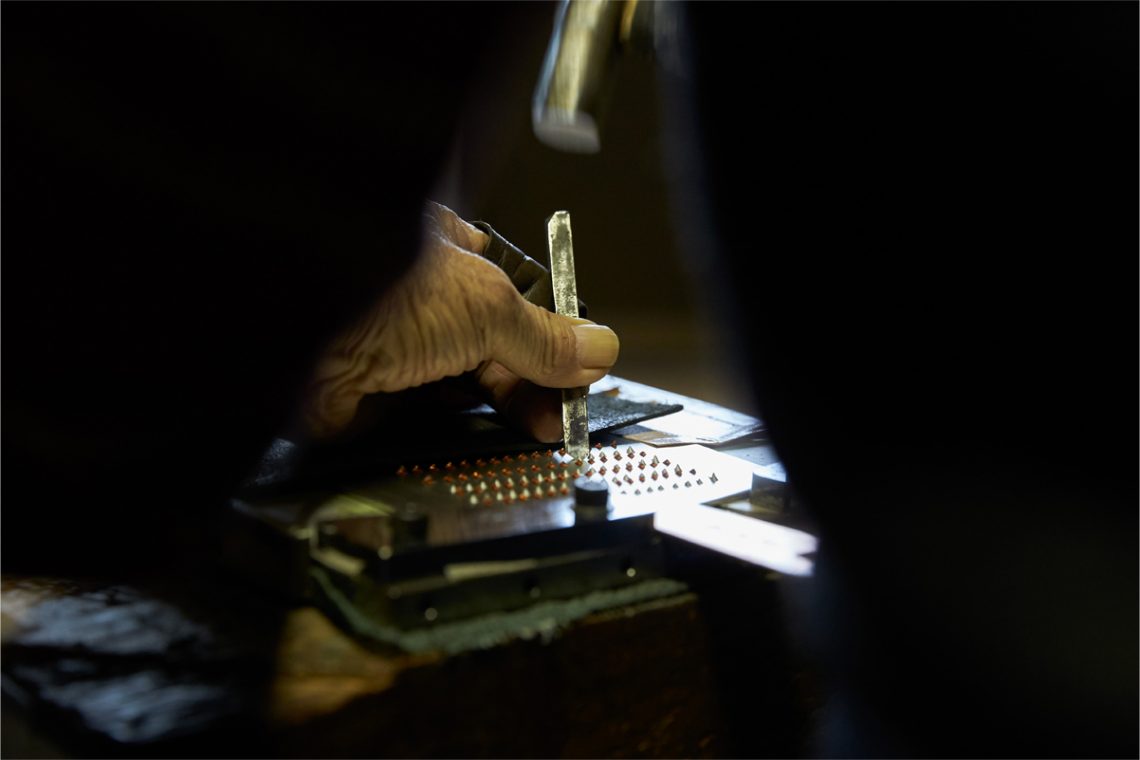 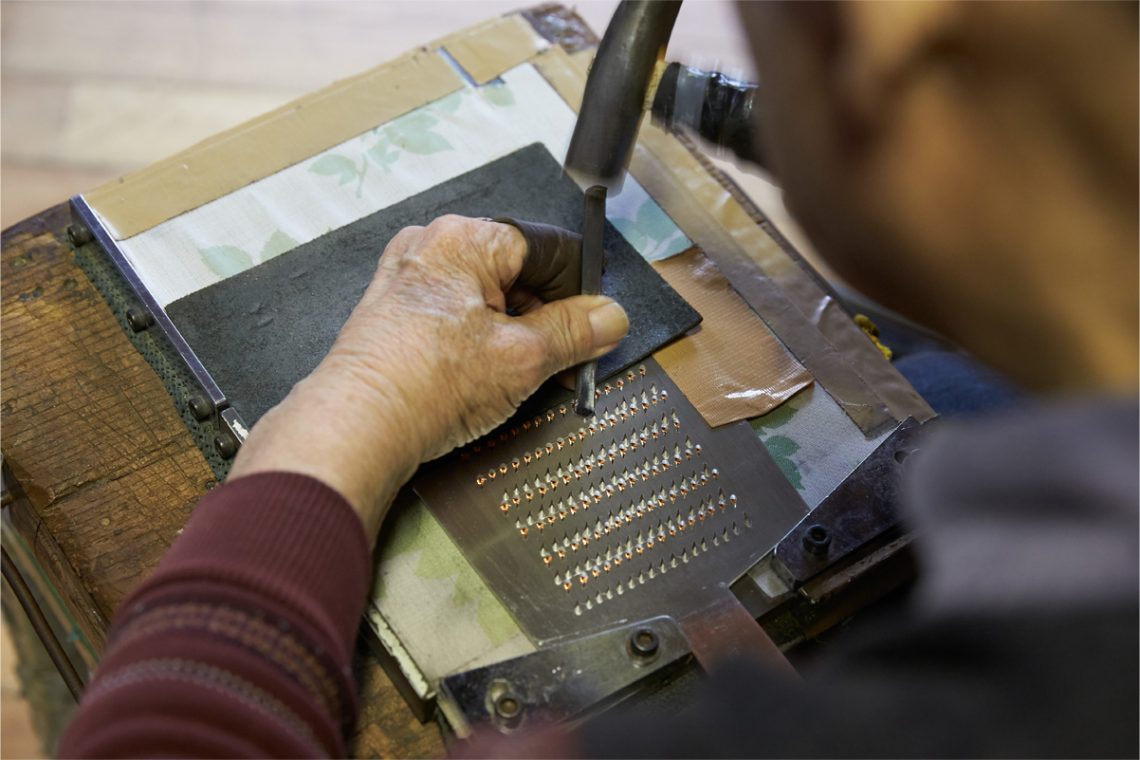 There are blades on both sides, which allow you to save your strength when grating. 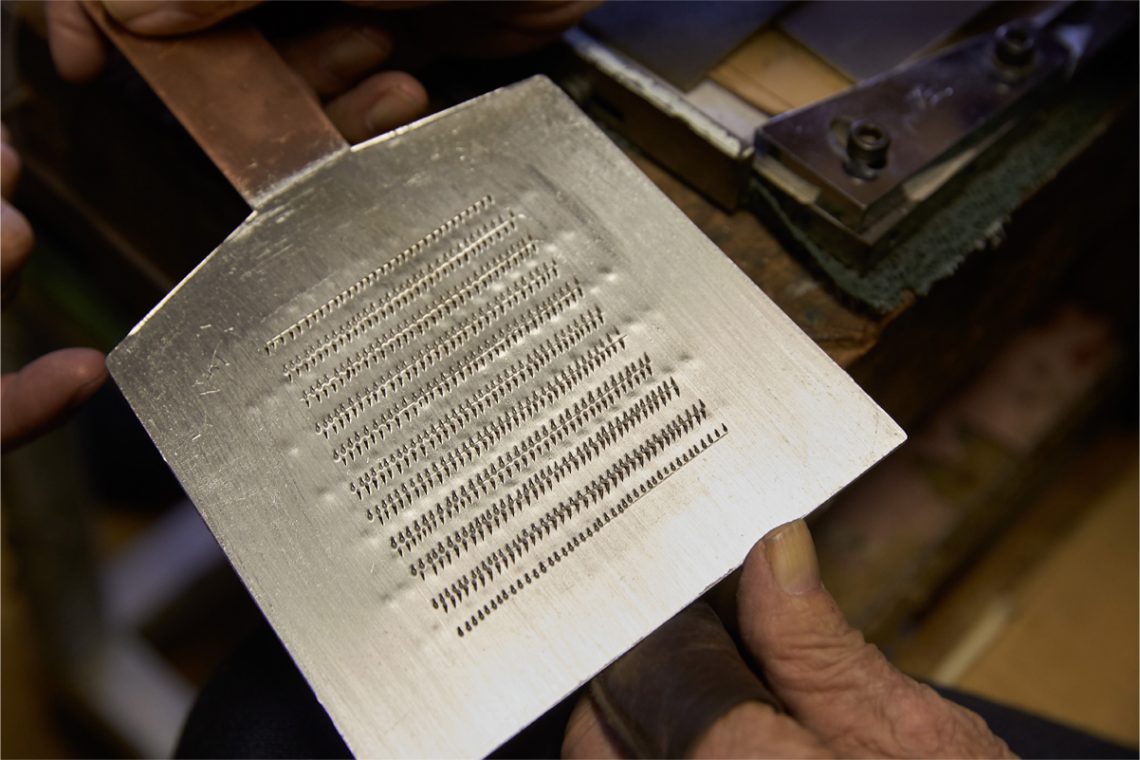 The backside of the board with smaller blades. 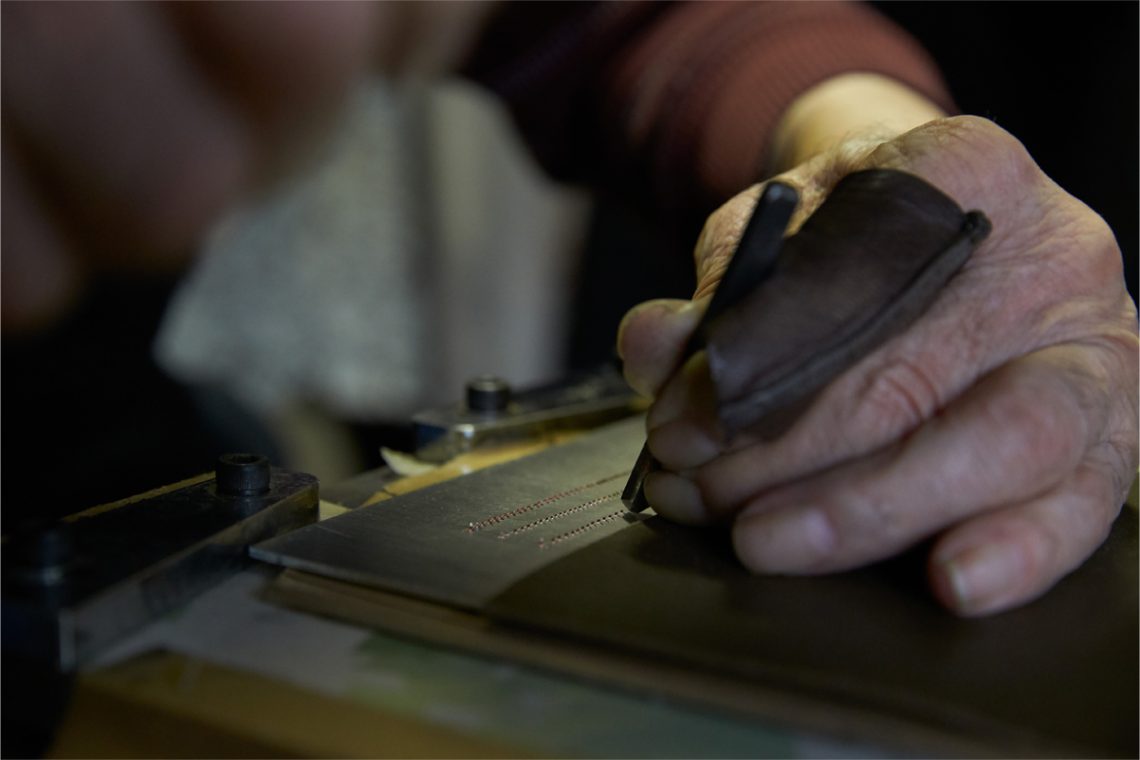 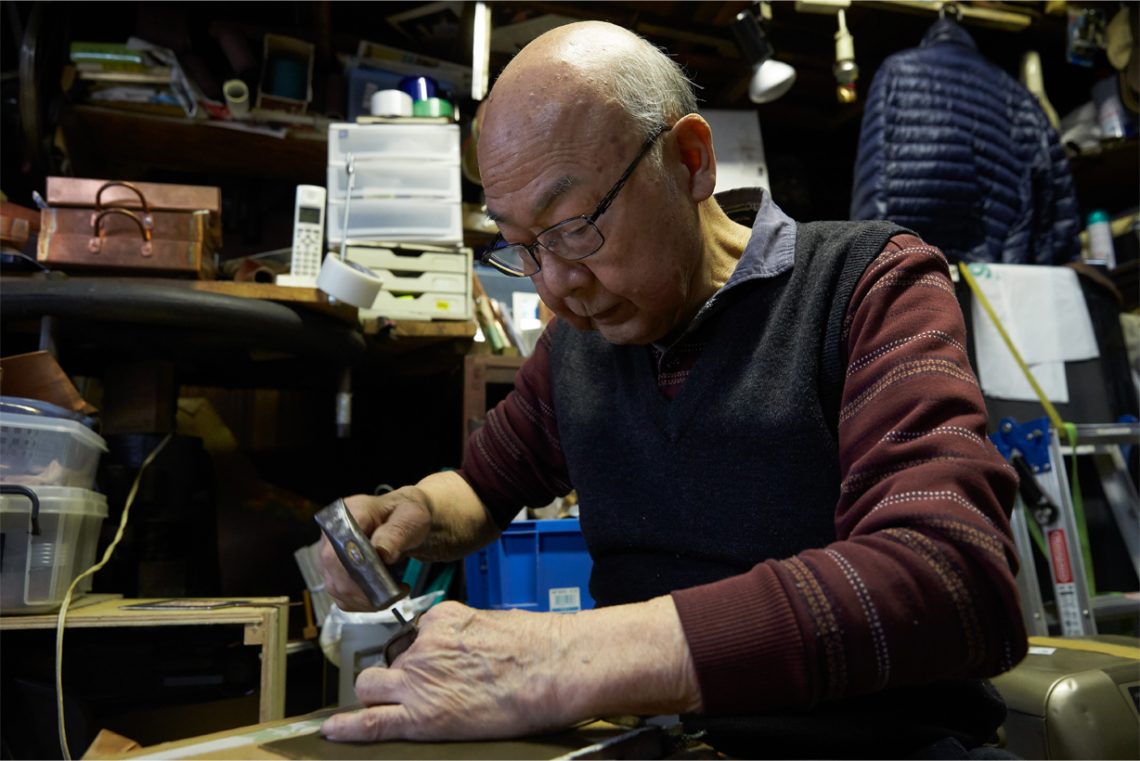 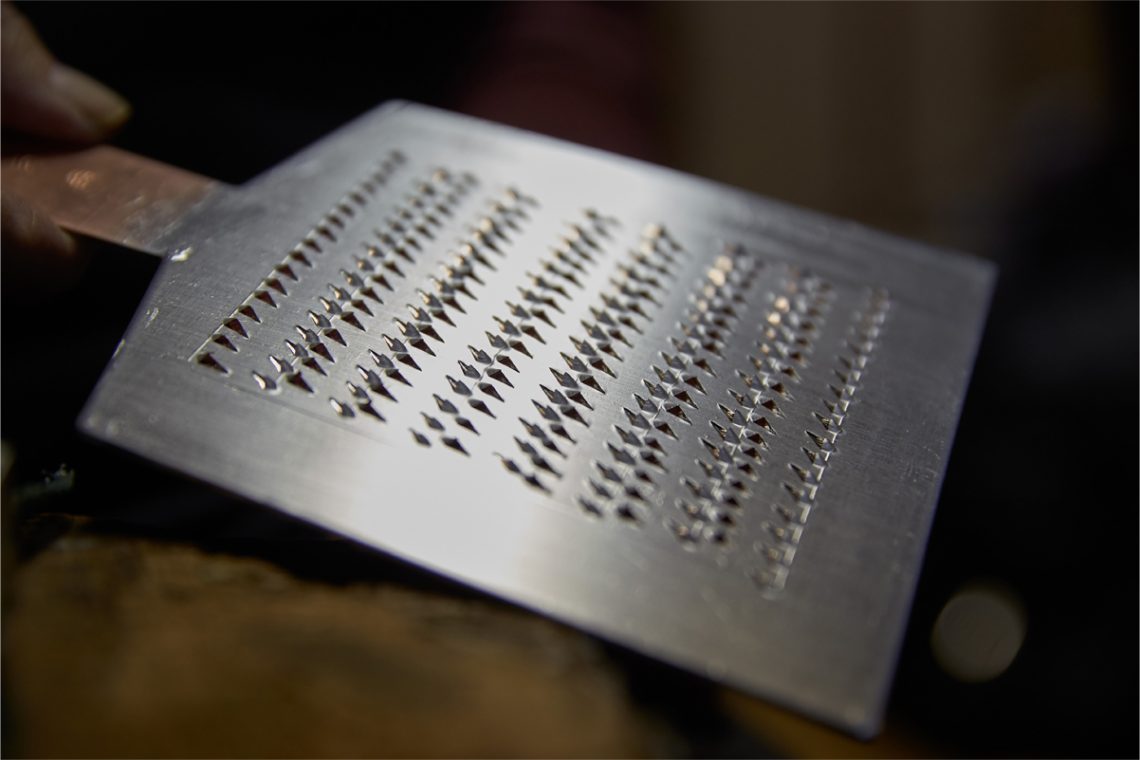 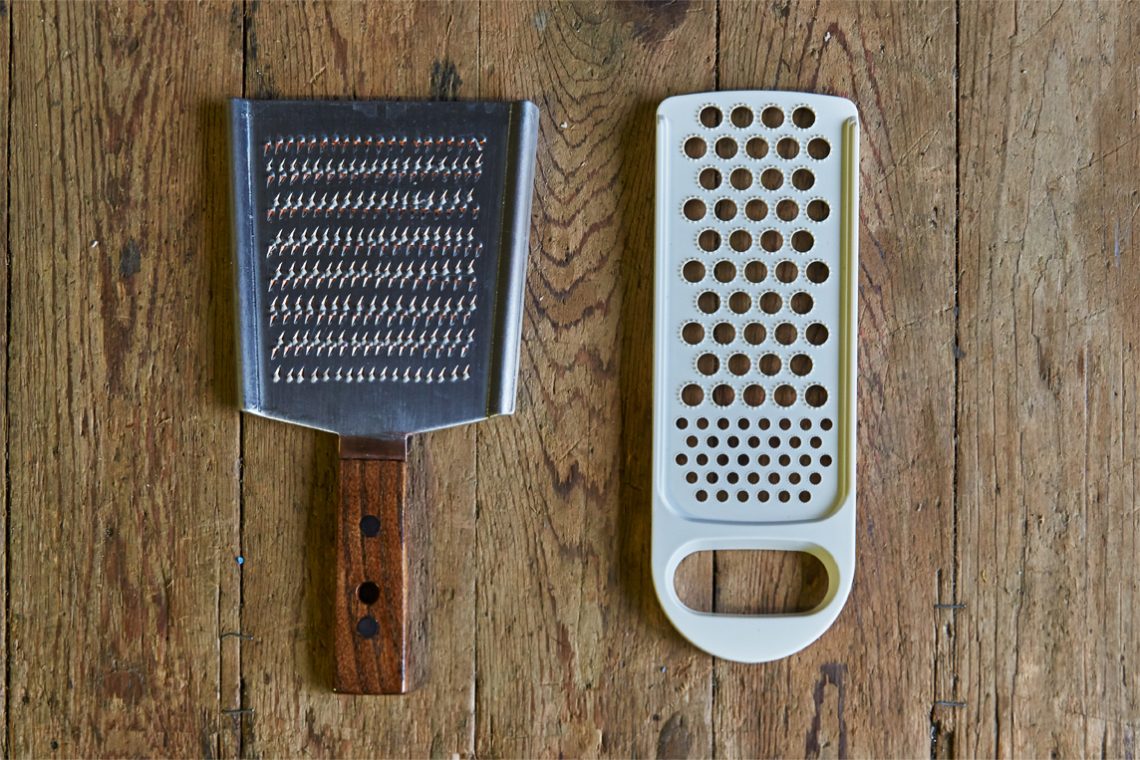 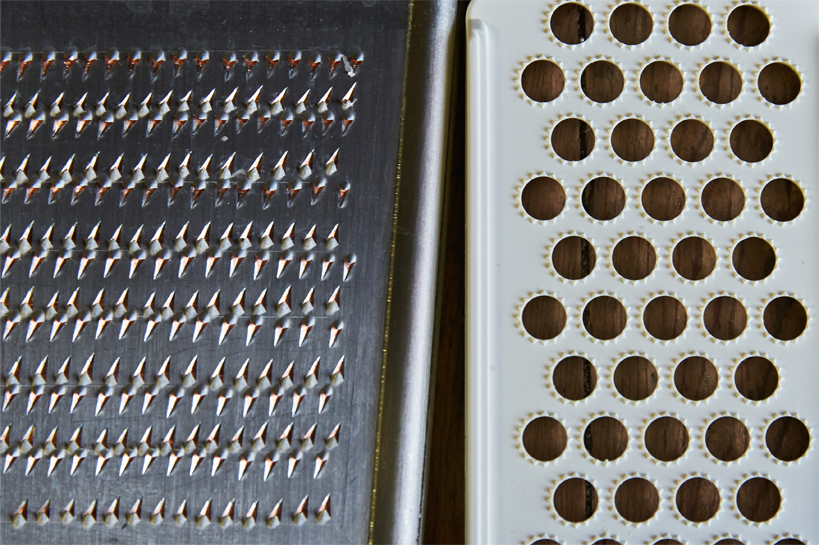 The “copper grater” of Edoko (to the left) and an ordinary plastic grater (to the right) used for the comparison experiment.

The lost water when grating the Japanese radish was obtained.

The lost water was measured with a measuring cylinder.  The result showed “approximately 7cc” (to the left) with the “copper grater” of Edoko, while it was “approximately 23cc” (to the right) for the plastic grater.

The experiment took place in the Open Test Room of the Tokyo Metropolitan Food Technology Research Center in December 2019.

Experience yourself why the grater has been a longtime selling product.

The longtime selling “copper grater” of Edoko.  We have explored into the appeals of the grater as we watched the materials and the manufacturing process, as well as through the experiment.  We have to say though, that the difference is most genuinely felt if you used the “copper grater” of Edoko and tasted the grated food.  We suggest that you experience yourself why it has been a longtime selling product. Takashi Teshigahara, the second-generation president of the “Edoko Teshigahara factory”