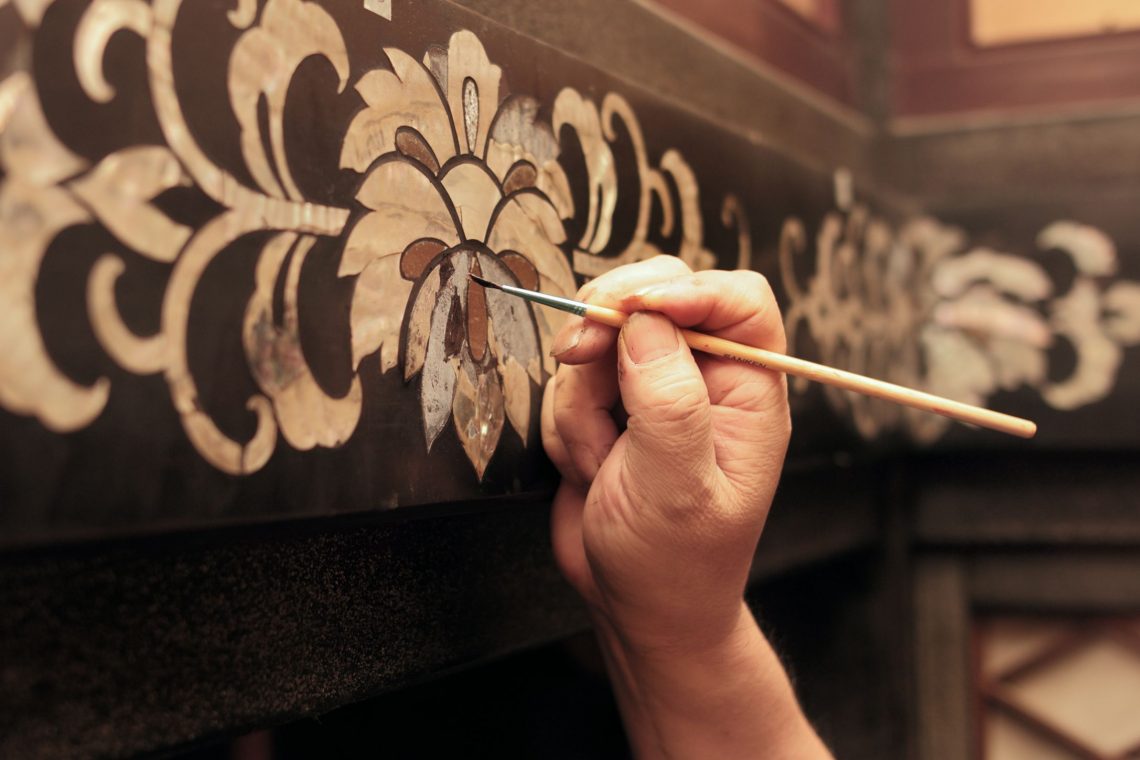 To restore the one hundred stairs

Known as the “Dragon’s Palace of the Showa Era”, the Meguro Gajoen Hotel is famous for its ornate decoration.  While it was rebranded as the Hotel Gajoen Tokyo in April 2017, the beautiful carving and picture displays remain as they did when it first opened.  Within the hotel the only piece of wooden architecture is the famous Hyakudan Kaidan (One Hundred Step Staircase), built in 1935.  In fact made of 99 steps, it functions as a long corridor connecting seven individual rooms each with artist completed ceilings and panels.  Its cultural value was recognised by the Tokyo metropolitan government in 2009, when it was granted special designated status.

One of the seven rooms is Jippo no Ma, which is a dignified space adorned with pictures of natural scenes from Japan’s four seasons by the artist Akira Jippo.  Alongside these works the room is lined with panels made of shell inlayed black lacquerwork known as Raden.  These were subject to a painstaking period of restoration over four years until September 2017, with the work completed by Shintaro Ataka of the Ataka Shikkouten lacquer works.  His experience of architectural lacquerwork in many famous contexts, made him one of the few skilled craftspeople able to take on this task. 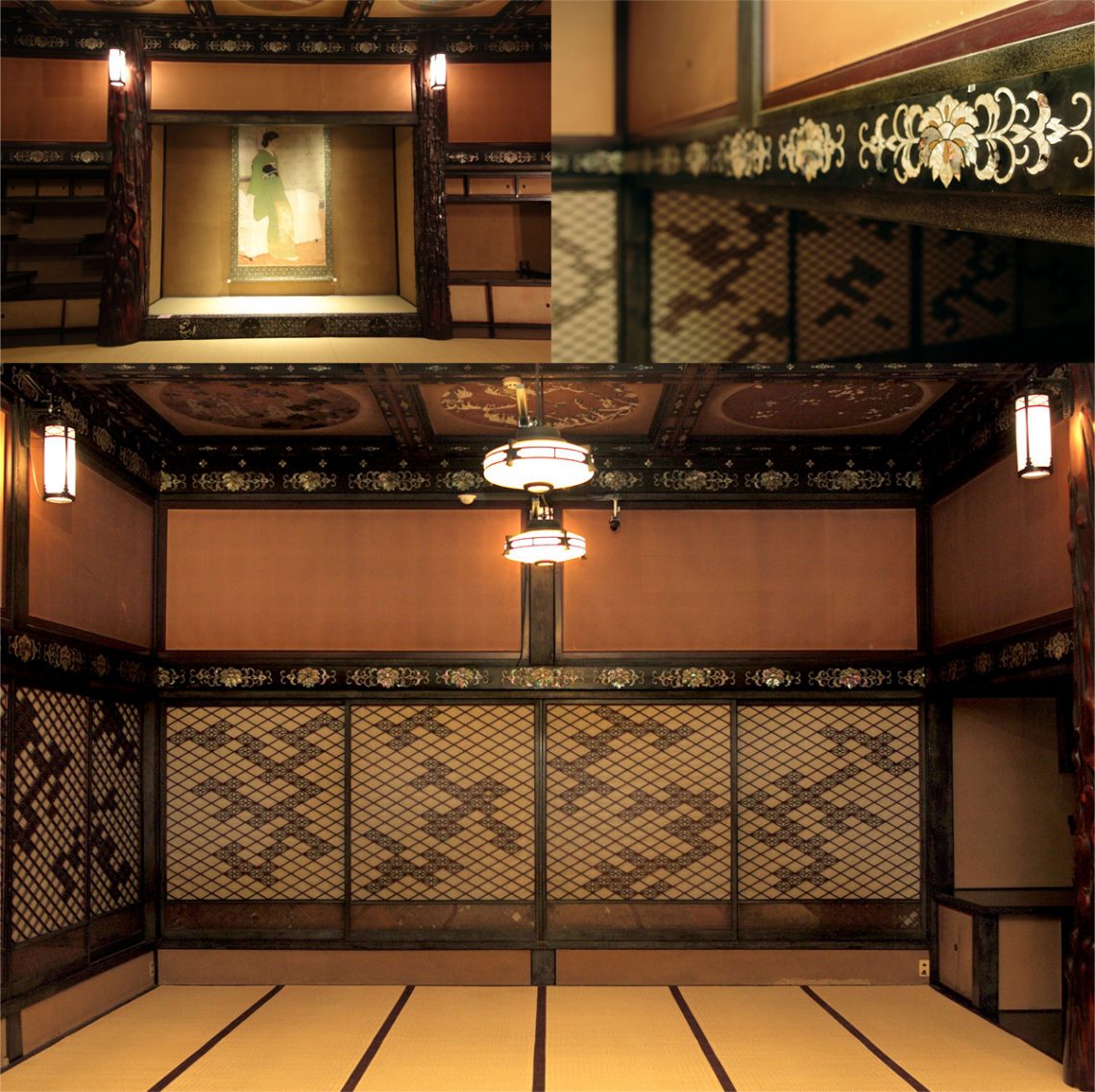 The Jippo no Ma room is one of those accessible from the One Hundred Step Staircase.  Its ceiling and sliding door covers are decorated with Kachoga works depicting natural scenes by the artist Akira Jippo.  In other places fine Raden shell inlayed lacquerwork add refinement to the space.   Over the years shells had been dislodged and wear had become obvious in the room.

Raden refers to a technique of embedding cut sections of nautilus, turban, abalone and other shells with pearl like sheen, into surfaces with lacquer.  The lacquer’s adhesive property holds the shells in place, allowing light to strike them to create rainbow and other beautiful effects.  In the Jippo no Ma room the panelled ceiling, room beams, skirting and frames feature Raden patterning, but over the years have seen their embedded shells fall and lose their position.  Shintaro Ataka found the restoration work especially difficult: “for a designated cultural property, we must retain its original state.  Even if the shells are broken we should try to work with the original materials, rather than replacing them with new ones”.  To use new pieces of shell would be quicker and leave a brighter effect, but something too would be lost. “The shells that have come loose appear white.  It is possible to affix them with black lacquer, and this creates a visual effect, but the lacquer needs the correct temperature and humidity to dry.  Especially in winter, the heating caused a lack of humidity which meant it was a struggle to dry the lacquer”.  Ataka had to apply lacquer, fix the shell fragment in place, and then place a wooden block on the section to have it dry.  He repeated this process many times, often in the early morning before the room was open to the general public. 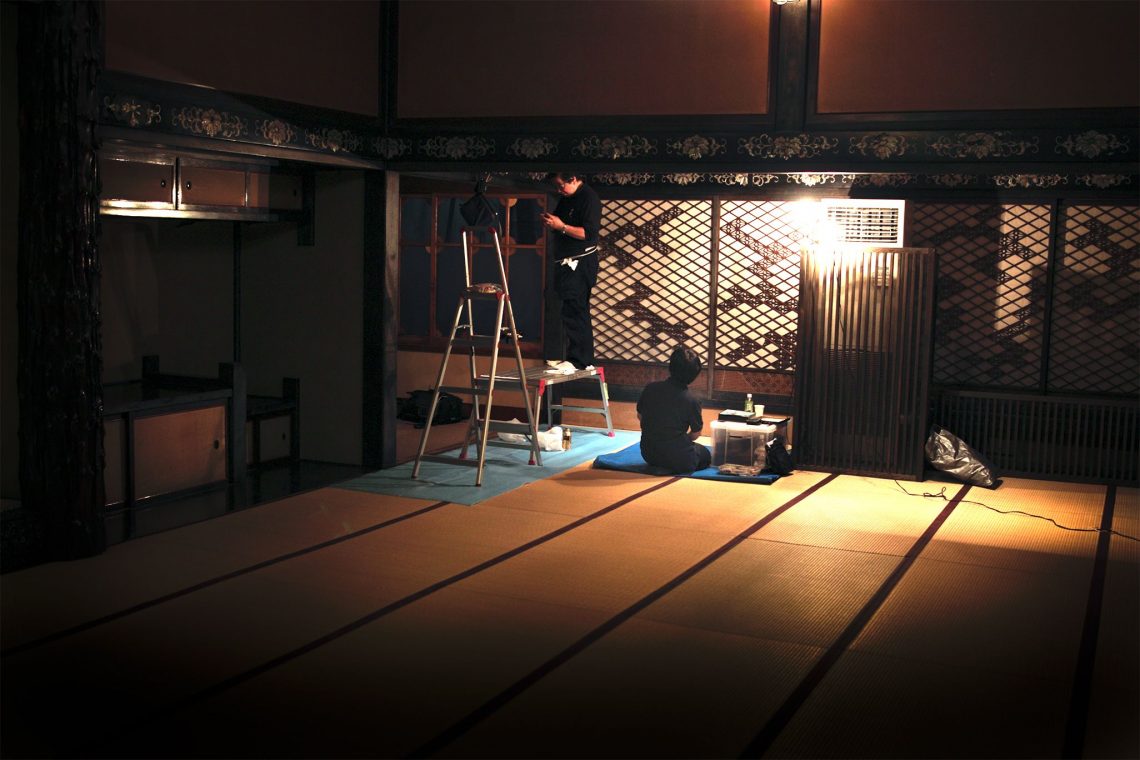 Work begins before daybreak.  Shintaro Ataka, together with his wife, worked in this way on the restoration project for four years. 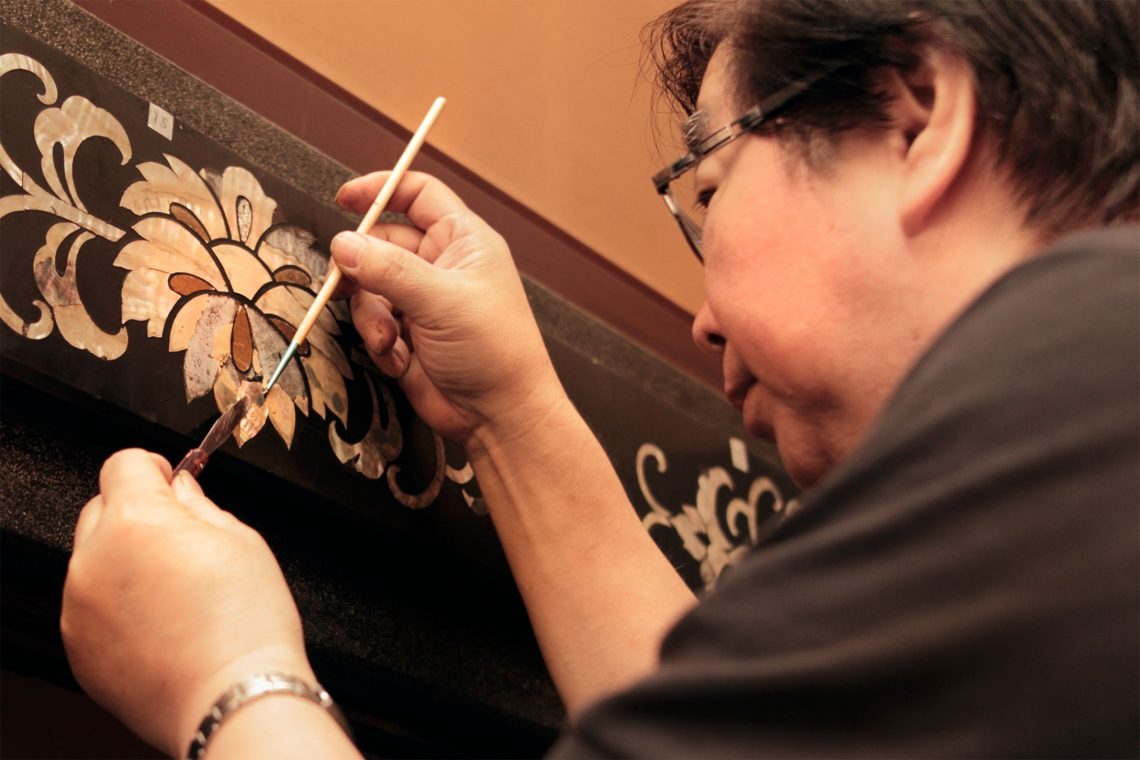 After carefully removing the pieces of shell, Ataka applied black lacquer and returned them.  In the case that shell fragments had fallen and been lost, he replaced them with new ones.

Four years on, a new impulse for creation

The restoration project was hard work.  But within its course Shintaro Ataka was often surprised and impressed by the accomplishments of the craftsmen of the day.  “I found the good work they did in the amount of lacquer they used to secure the base.  These are sections that you can not see, but they become important as the years pass.   Also where the lacquerwork was visible, there were moments where I wondered how they did it, but overall I realised they followed a very stable process.  I learnt a lot from that”.

The use of lacquerwork in architecture, on the pillars and panels of Japanese rooms, is the origin of Ataka’s skill.  His hope is that this can now be applied to other aspect of modern lifestyles, and that more can get to know its quality.  It is in this spirt that he has turned his hand to making items for the table, and to present flowers.  The chance to connect with the work of the finest craftspeople of their era, has only supplied him with further inspiration.  From Ataka’s personal library of lacquer, new items and expressions are bound to emerge.

Using lacquer from Japan, Shintaro Ataka applies it to a raised floor panel in a way that enhances the texture of the wood.  With a tool he imprints and wipes the lacquer across the board.  While he adapts the process to the customer, it is Ataka’s practice to complete this work at least six times to bring out the character of the wood. 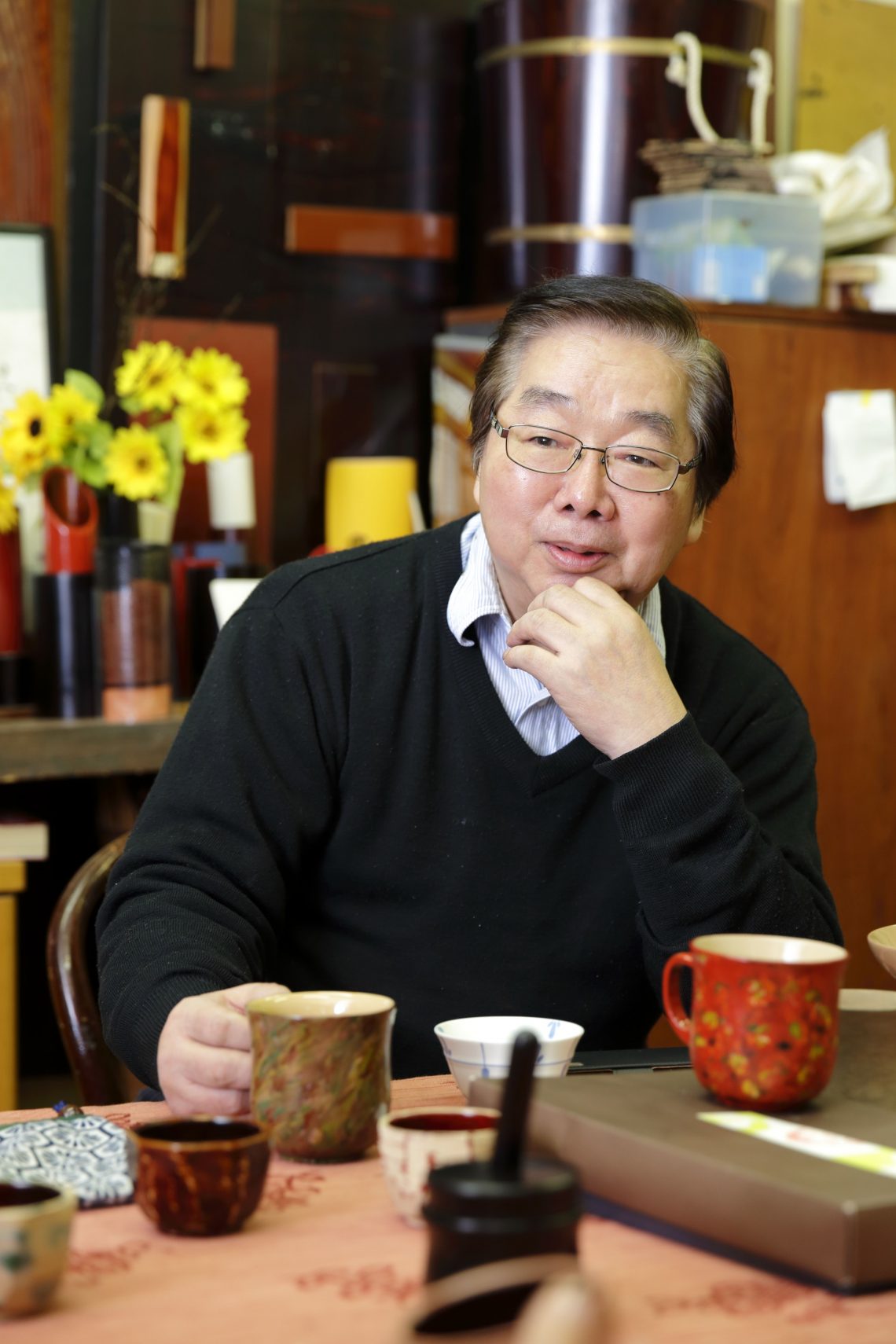 From mugs to sake cups, Shintaro Ataka makes many items for use in the daily life of the home. 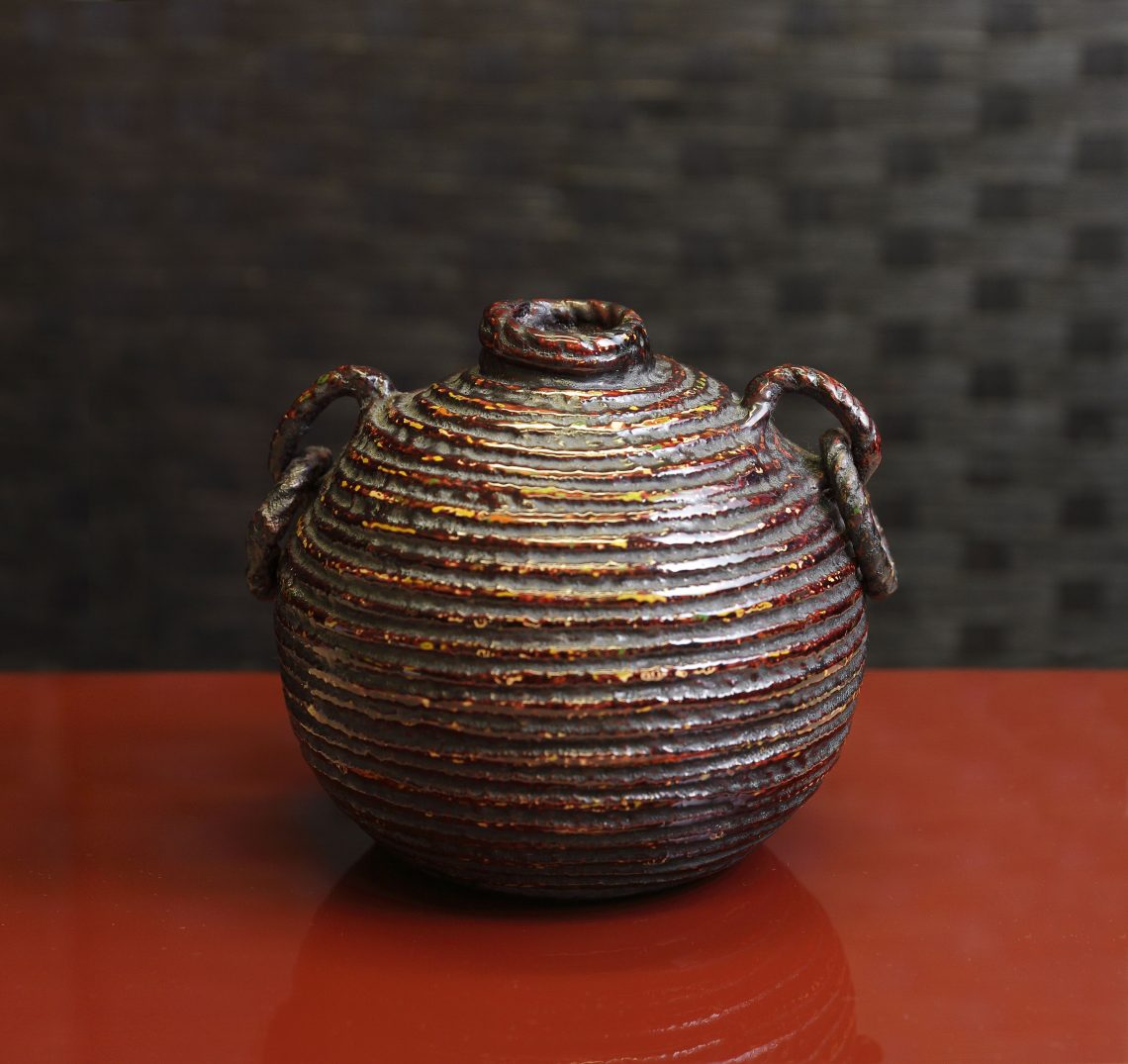 Several different shades of lacquer are applied onto hemp string wrapped into the shape of a vase.  After this, the pattern is carved.  In order to add shadow to the surface, Ataka used the Kamakura-bori style of lacquer onto carved wood.

Attached to the Ataka Shikkouten lacquer works is a small local government designated lacquer museum, where visitors can learn about the craft.