Drawing out the hidden beauty in timber 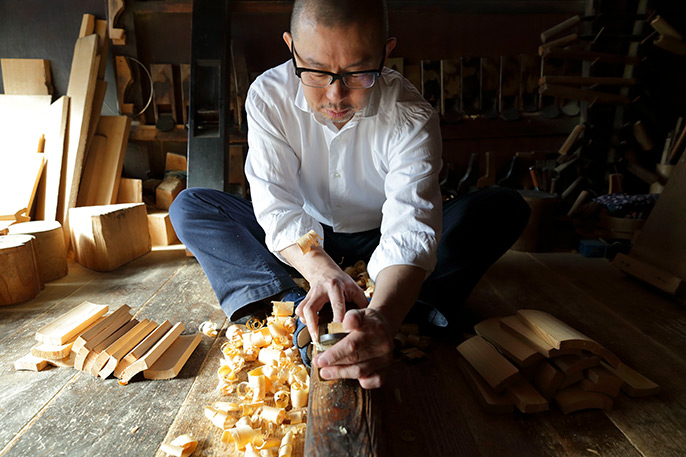 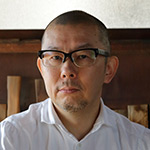 4th-gen Okeei cooper Eifu Kawamata
After graduating university and working as a company employee, Eifu joined his father’s Okeei practice in 1986. In 2007, he started the 4th generation of Okeei coopering.

Listening, while smelling the fragrance of trees

The wooden mallet strikes the froe at an unwavering speed, splitting timber with over 300 years of growth rings. By the time the timber is reduced to half its original size, a strong woody fragrance hangs in the air. The wood is from the Sawara cypress tree, felled in Nagano prefecture. Within the national forest, less than 1% of trees available for logging are over 300 years of age. The handsome straight-grained appearance of the oke is produced from this precious timber. Wearing tabi socks and setta sandals, the silently working figure of the craftsman is 4th generation cooper Eifu Kawamata. It has been 30 years since following this path. Listening to the pleasant rhythmical sounds, one can hear the sureness of his arm. In modern times, wooden oke are rarely seen. However, only a few decades ago there had been many varieties of oke containers made all over Japan. Oke for washing hands; oke containers as plates for sushi, rice, sake barrel, pickles and miso; bathtubs and even coffins. That several pieces of wood held together in a hoop binding could be a watertight precise container is testament to the craftsmanship of Japan. Furthermore, the handwork involved is surprisingly detailed. 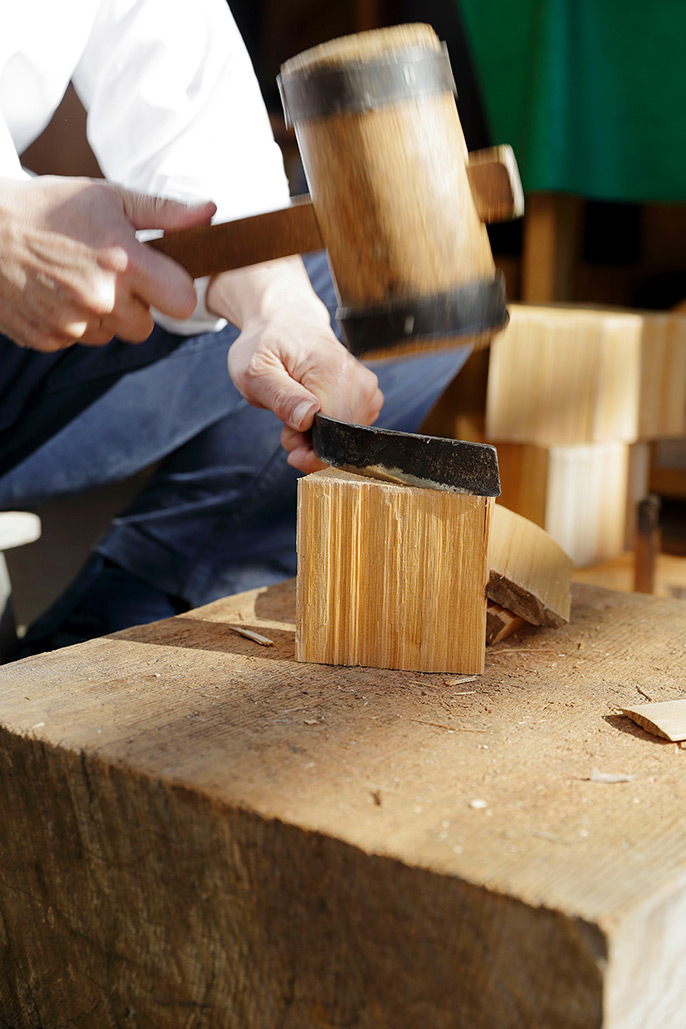 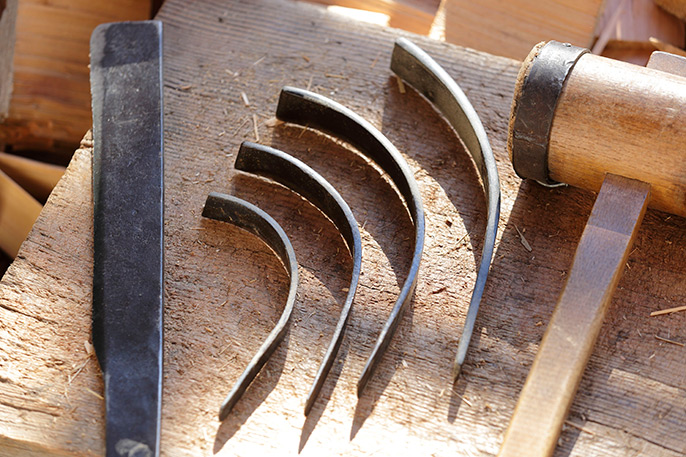 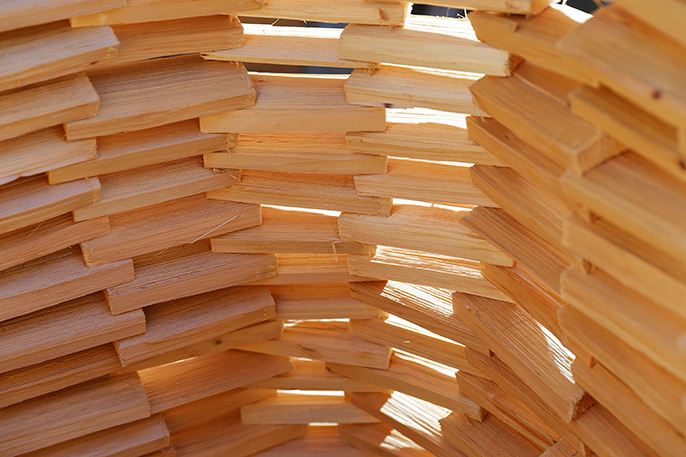 A palace carpenter or a cooper

What Eifu-san has shown me so far is the splitting process. Originally, the Sawara cypress log is bought in ~5 metre logs and aired for a year before being cut into smaller rounds according to the height of the oke. This round is then radially split into stave blanks with the use of a froe. The staves are aired for another half year or so in the sun and finally dried indoors over heat for a day. From here on, the handwork gets increasingly delicate with the use of specialised tools. Shaping using a flat drawknife, hollowing drawknife, long jointer plane and shaving horse is followed by assembly using metal hoops and glue and further dressing and polishing of the assembled staves. These are the main processes, although there are additional process involved in making lids and bottoms. Eifu-san occasionally uses a palace carpenter’s spear-plane to polish his work. “In all of the country, there are probably only 5 other coopers who undertake the kind of elaborate work I do” he says reservedly, although there are likely no craftspeople using spear-planes in woodwork. During the jointing process a large plane is used, but for the staves to be properly jointed together requires great precision. The result of such exacting precision and the result of a playful mind is the wooden goldfish bowl. Filled with water, aquarium fish swim calmly within. 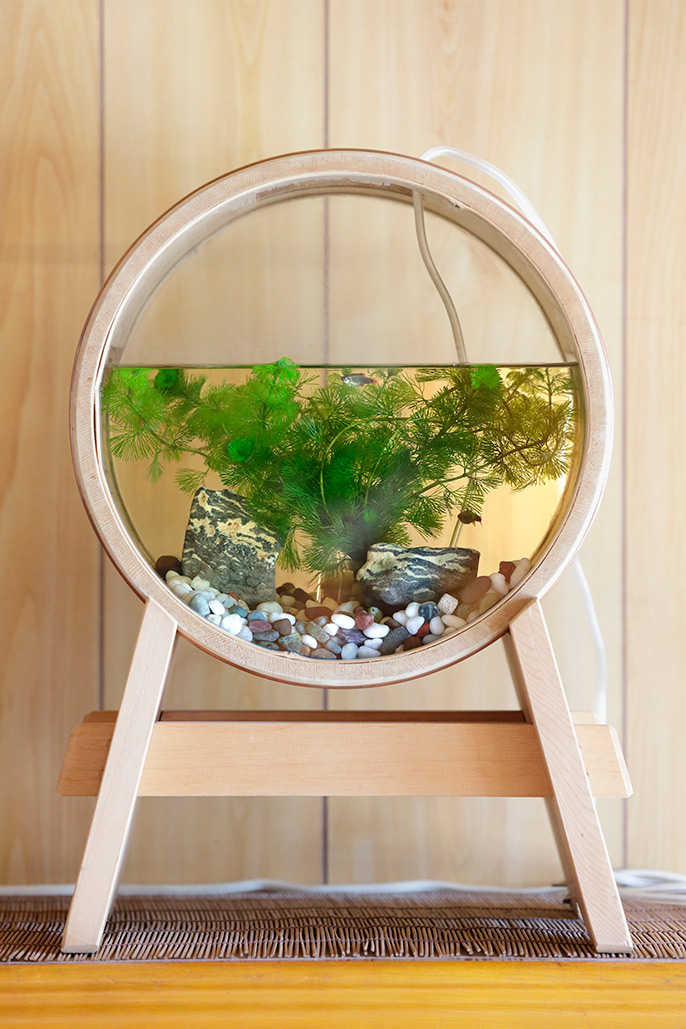 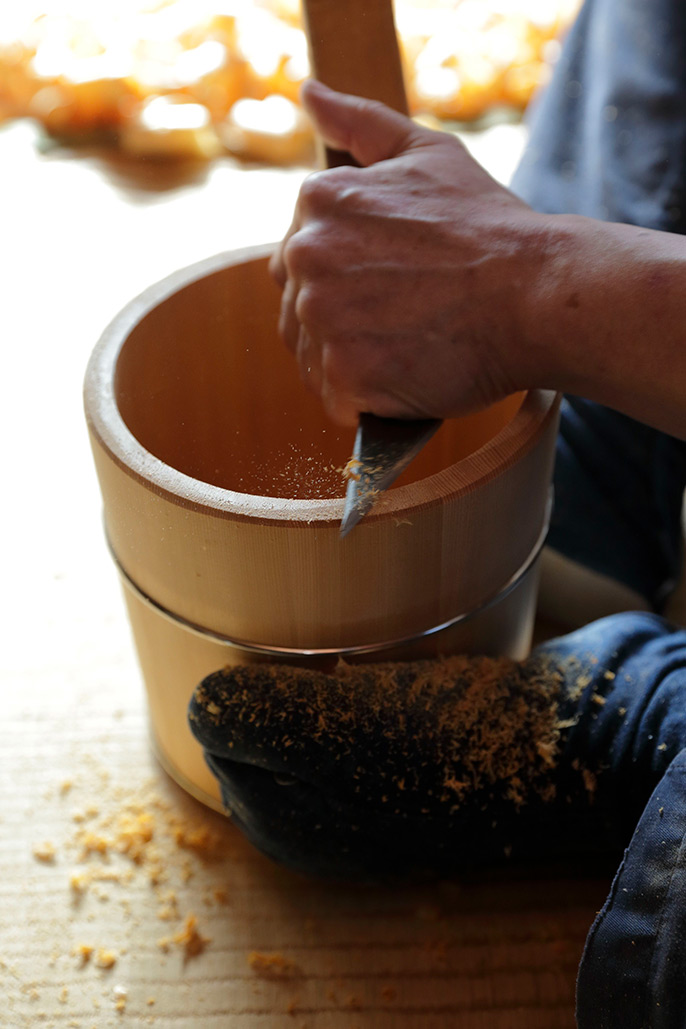 Against the prevailing winds, in technique and aesthetic sense

Whether it be the signature rice container or a wine cooler, Okeei’s products are instantly recognisable. From the exquisitely uniform straight grain of the wood, to the nickel-silver hoop and even the bottom pattern alluding to a small offering stand, all are unmistakable elements of design. The cooperages of founder Shin-emon Kawamata established a reputation for beauty and durability, whose techniques and aesthetic sensibility carry on in the 4th generation Eifu-san. When first introduced to his father Eiichi’s 3rd generation oke coopering, it had been rationalised that such craftwork would be outsourced overseas due to de-industralisation. In direct opposition, Eifu-san began to engage in an old-fashioned practice seemingly running counter to the times. “At first I’d work from morning to evening and there were times I’d fall asleep while eating dinner” says Eifu-san. It took over 10 years to get to the thought, “I can generally do this”. After that, an awareness of personality and contemporaneity through his work began to emerge, as new nickel-silver hoops, wine coolers and other new container products were developed. “Oke may be tools, but the integrity of the shape is important” he says quietly, yet so much of his work seeks a wider audience. The techniques and aesthetic sense that he has developed will surely increasingly impress in the future. 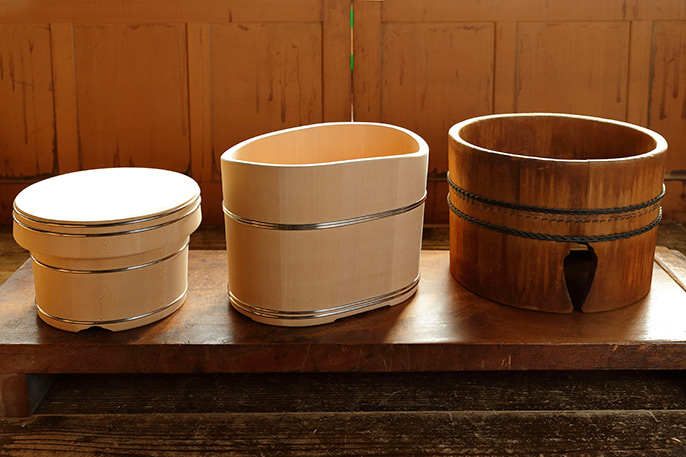 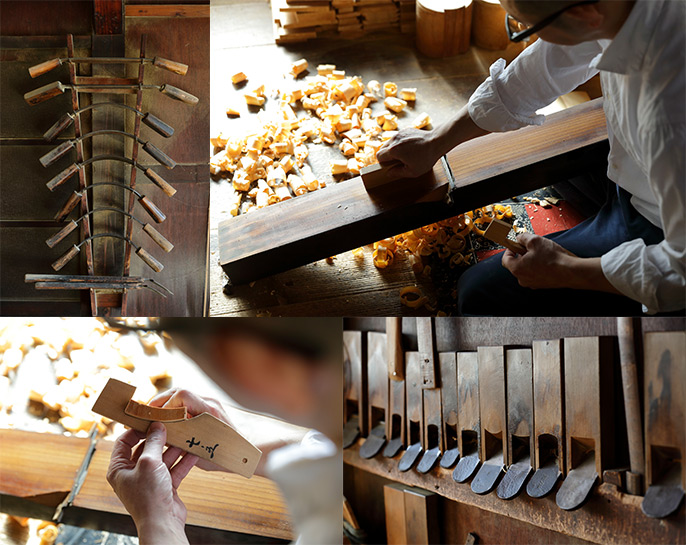