Drawn to dyeing, charmed by chintz 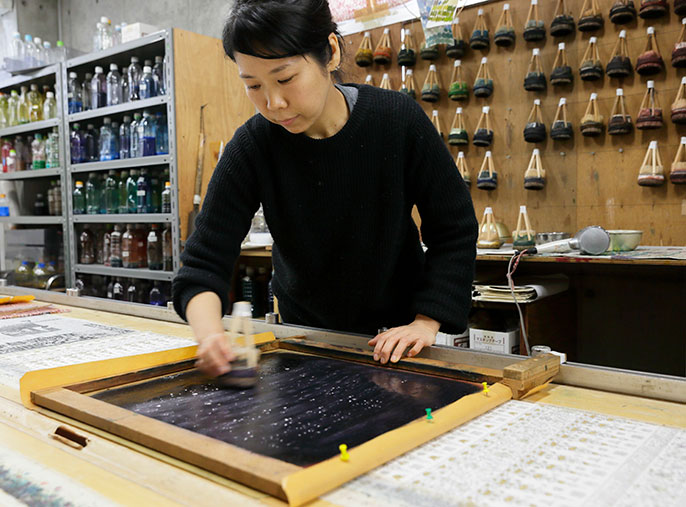 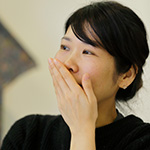 To the white fabric, again and again.

Above a fixed wooden frame, a hand with a round brush moves busily top-to-bottom side-to-side. The frame is lifted to check that the dye has sufficiently imbued into the white cloth, then repositioned as the the brush strokes recom-mence. The work may appear speedy but is carried out with care. The holder of the brush, Hanako Inoue, is a Futaba-en print maker with over 9 years of expe-rience. The 9 metre piece of white cloth she is dyeing, a Nagoya obi upon com-pletion. As the application of the ink reaches the border of the white cloth, a new stencil is placed in the frame. The technique is repeated with a paintbrush using a different dye. Over the first seemingly random application, another pass is added. Another stencil, another pass. As she hovers over the frame, one can see the beginnings of a design emerge. An elephant carrying passengers, heads carrying baskets, the Indian influence comes into view. 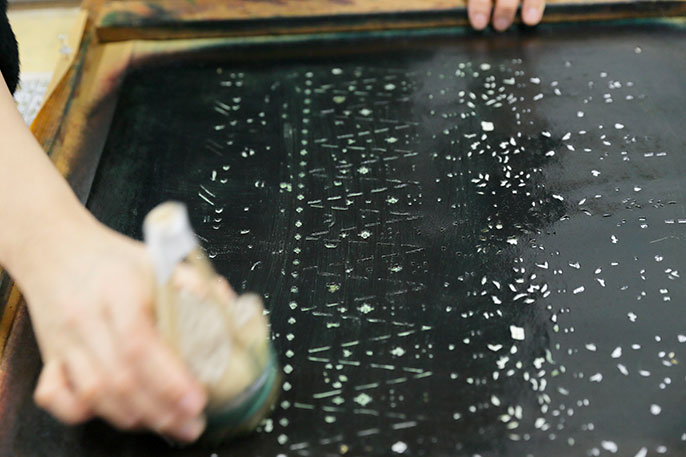 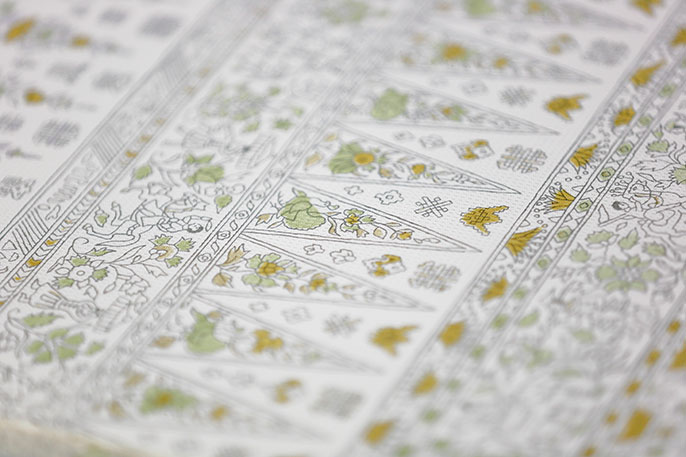 “The fabric is known as Edo Sarasa and usually involves many stencils. At 10 stencils, this piece is on the less complicated side”, says Inoue-san. For more detailed Edo Sarasa designs, over 30 stencils have been used. While placing and replacing these stencils in the frame is labour intensive in itself, there is al-so an element of dexterity and patience in aligning the pattern correctly. For Inoue-san, “It is precisely because so many paper stencils are used, that when the final application is aligned I feel a great sense of accomplishment”. “Even when using the same stencil, a different colour scheme can produce a complete-ly different result; that is an interesting feature of Sarasa”.

The seemingly exotic origins of Edo Sarasa lie in India, over 3000 years ago. During the Muromachi period, Nanban trade brought Indian chintz to Japan where it began to spread. By the Edo period, it had acquired a distinctly local character in the forms of Kyo Sarasa (from Kyoto) and Edo Sarasa. Compared to the bright colours of Kyo Sarasa, Edo Sarasa expresses a more wabi-sabi aes-thetic. “The base colour of Edo Sarasa is often quite pale, but at Futaba-en we use a ‘fusegata’ frame which allows us to isolate areas of deep colour, and cre-ate more bold shades and patterns. It makes for a beautiful look.” 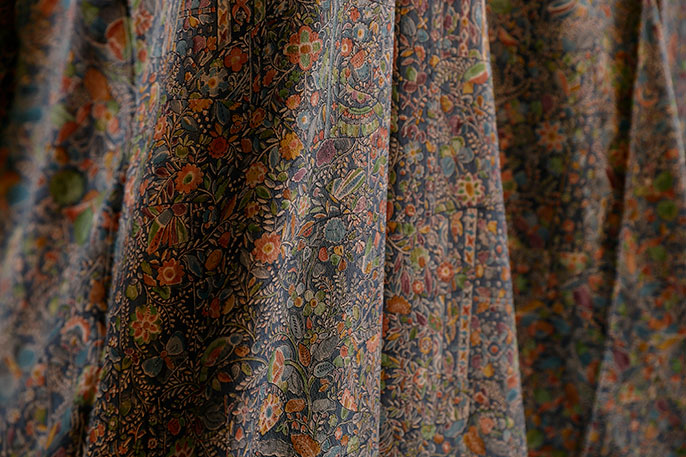 Feeling moved by a piece of fabric

“When I see customers wearing fabric that I have dyed, I feel happy” says In-oue-san, although she doesn’t wear kimonos herself. What was it that initially drew her to textile dyeing as a profession? “From 2nd Grade to 4th Grade, due to my father’s work, we were living in South Africa. There were people from all over the world, and when they saw photos from my Shichi-Go-San [rite of pas-sage] or my mother in a kimono, many would be genuinely impressed. Look-ing back, “perhaps that experience could be considered the starting point.” Of course, there was also an interest in drawing from a young age. But it would appear that seeing the power of a piece of fabric to move the hearts of people, that is what lead to pursuing textiles as a career path and entering arts school.

Looking at the work of dyeing, the stooping involved, the heavy frames that are moved, the cold water in which much washing is done; one would call it pretty hard labour. “The water is cold, hands will get chapped, it’s hard to compare to the Yuzen method.” With the calm expression of a person that lives ‘now’ to the fullest, Inoue-san continues, “Achieving a great result on fabric from work done with my own hands, this is why I wanted to do this job” “Whether I am work-ing on a kimono or a noren [curtain] I try to put all my heart and effort into the dye work I do. But even so, it is nowhere near perfect, and I want to refine my skills.” 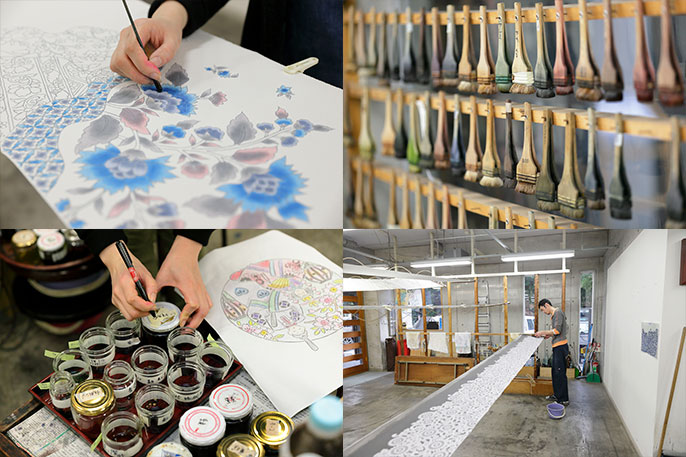 Futaba-en’s workshop has many young craftspeople. After joining the compa-ny, they are immediately launched into practical work. In an industry with a high level of division of labour, the ability to work on the entire process makes it a particularly engaging environment for novices. 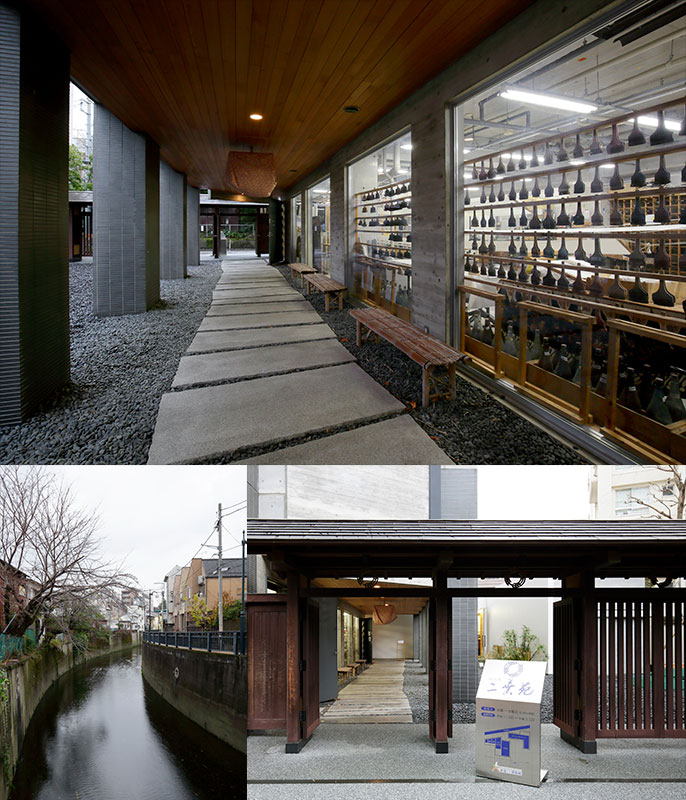 Futaba-en’s location by the Myōshōji River in Kami-ochiai, Shinjuku-ku. The figures of busy workers can be seen behind the glass.Open days and work-shops are sometimes offered, to promote the art of Sarasa to the wider world.