From the late Edo period, and through eras of change to the present: The History of Edo Kiriko 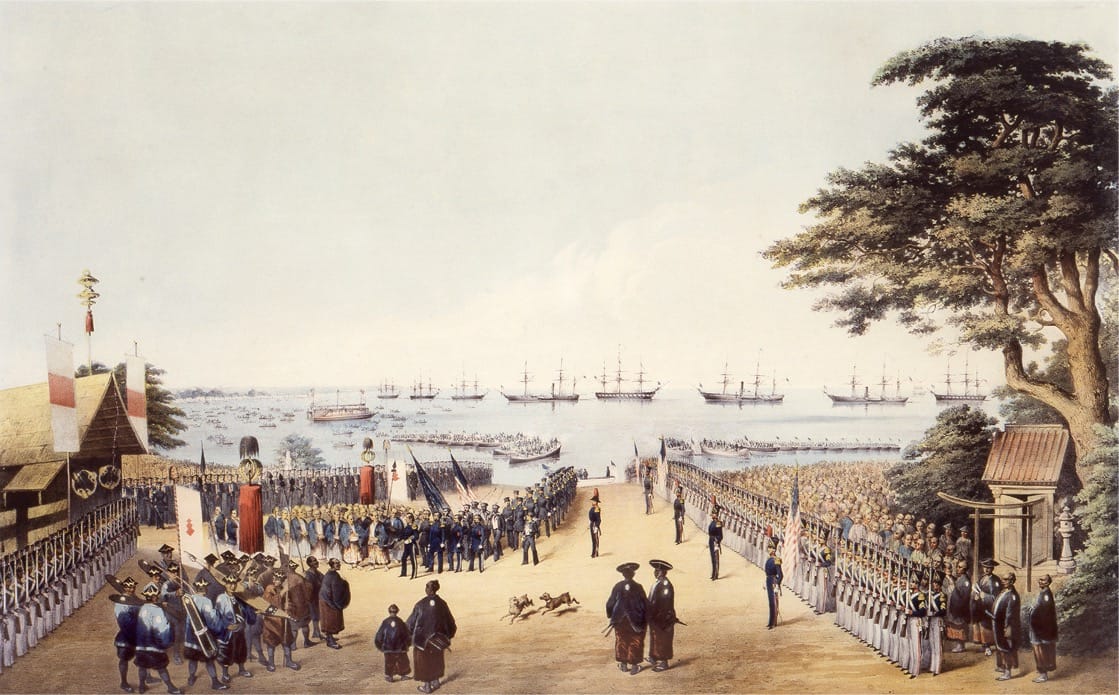 The cut glass of Kagaya, which surprised Commodore Perry

“The peaceful world awoken by Joukisen tea, just four cups are enough to prevent it sleeping at night”
The four steam ships commanded by Commodore Perry, first appeared in off Uraga in 1853. The lines of the Kyoka poem above are a well known contemporary satire on the state of confusion in the government of the day. While Perry upset the peace in a Japan closed to the world, it is also said that he was impressed by the skills he found in cut glass. That kiriko (or cut glass) was made by Kyube Kagaya of the eponymous glass wholesaler in the Odenmacho part of Edo (present day Tokyo). On receiving a glass bottle finished in kiriko, Commodore Perry was surprised and impressed that these skills existed in Japan.

While there are several competing explanations for the origin of cut glass in Edo, according to the ‘Modern History of the Japanese Ceramic Industry’, the aforementioned member of staff at Kagaya played an important role. That staff member: Bunjiro (later Kyube Kagaya), trained in Osaka and then years prior to Perry’s arrival, in 1834 experimented with crushed garnet stone to make cut glass. Dated to somewhere between 1830 and 1854 a reprinted Hikifuda (packaging that doubled as a product catalogue) from Kagaya, shows a range of cut glass products including sake bottles, pedestal glasses, glass trays and others. In 1846 it is known that the leader of the Satsuma domain Narioki Shimazu invited the Edo glass craftsman Kamejiro Shimoto to his region, allowing for the transfer of the Edo Kiriko technique to this area of south Japan. 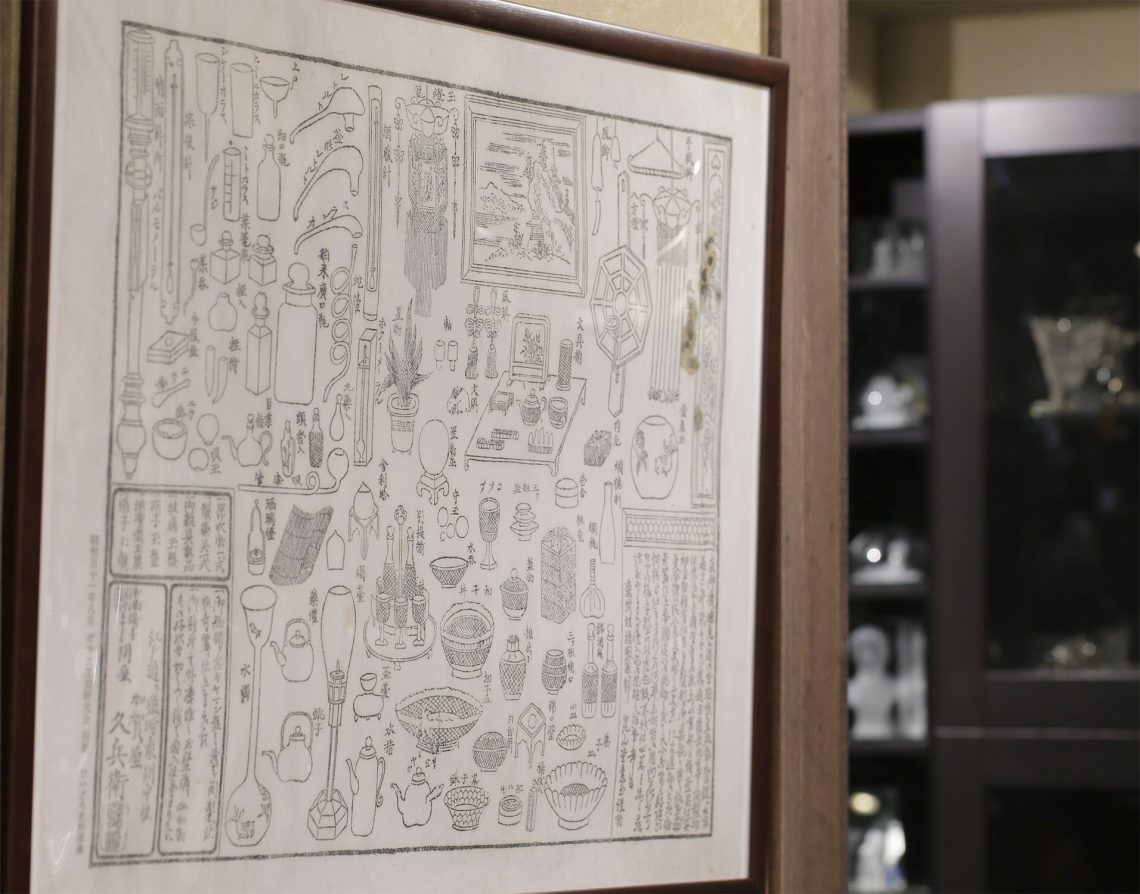 A reprint of Hikifuda packaging from Kagaya (personal collection)

Students at Shinagawa Glassworks, open the way for Edo Kiriko

In 1877 in the Ueno Park area of Tokyo the Japanese government organised its first exposition to promote new industries with the aim to “open the way to trade by supporting the development of crafts”. Prior to this in 1876, the state purchased a glass works in the Shinagawa area of Tokyo, and employed technicians to teach western methods of glass manufacture. In 1879 under the instruction of the British glass expert James Speed, the plant experimented in glass tableware. Two years later Emmanuel Hauptmann, also invited from the UK, was influential in teaching the techniques of cut glass and gravure etching. There were around seventy students who worked at the Shinagawa Glassworks, and it is said that most of the craftspeople who work in Edo Kiriko today can trace their roots to them.
The founder of the Shimizu Glass Company (established in 1923) Naojiro Shimizu was trained by one of the seventy: Jinnosuke Imamura. The company is now headed by its third generation president: Michiyo Shimizu. 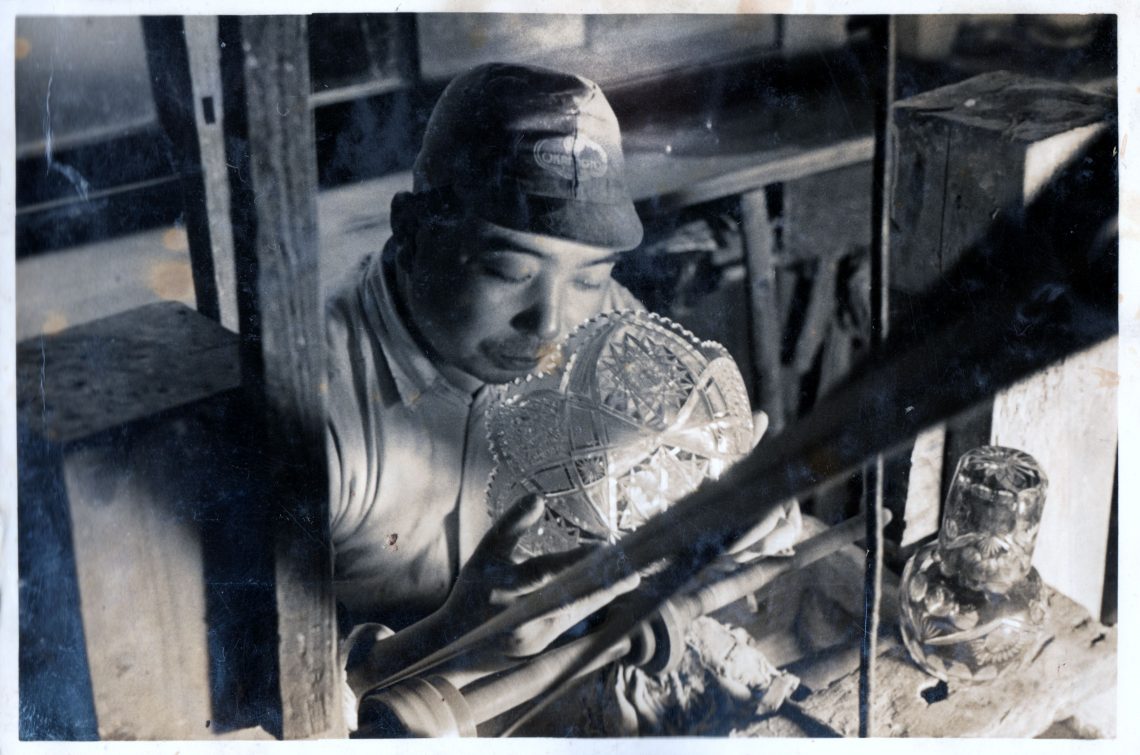 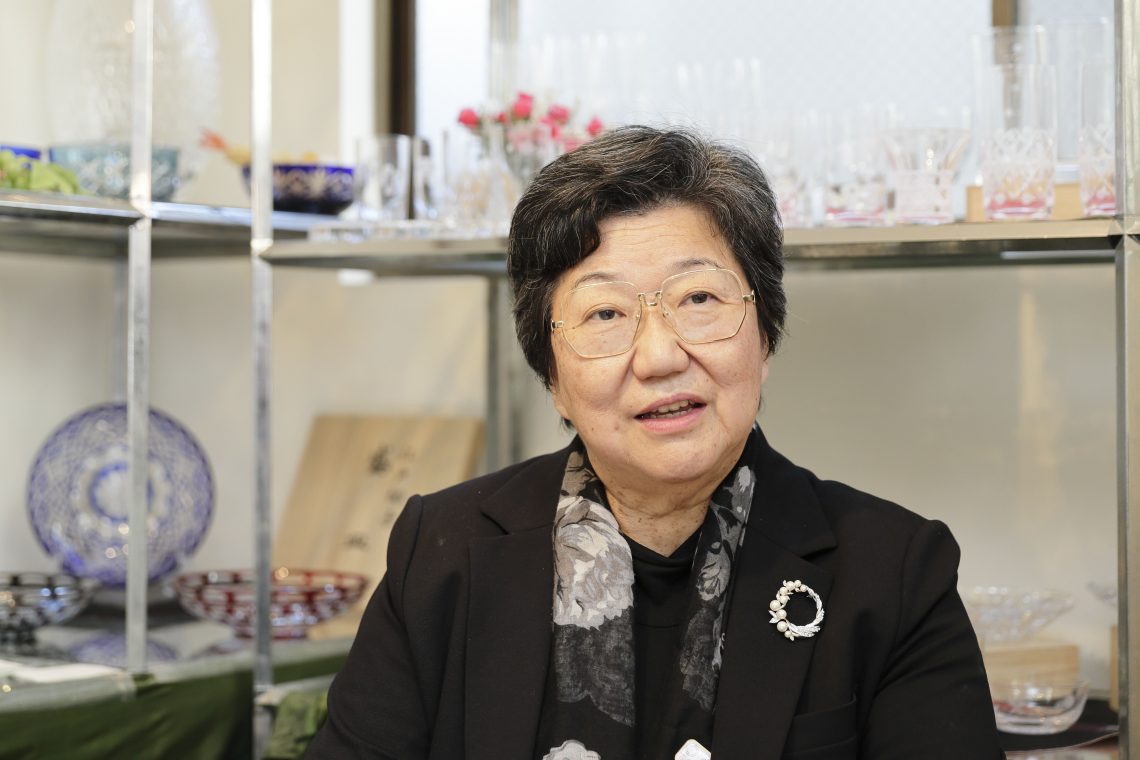 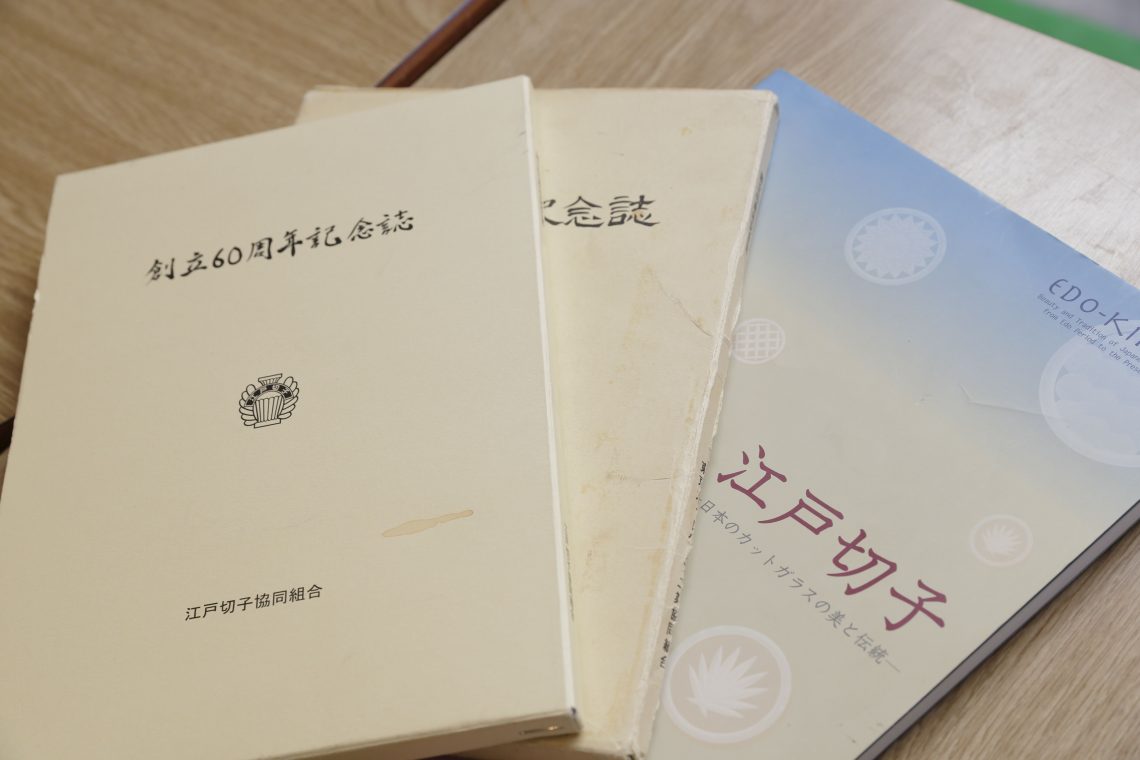 “The history of Shimizu Glass began in 1923 when my grandparents Naojiro and Shizue Shimizu opened a works in Fukugawa in Tokyo. During the war there was work to make glass for aircraft windows, and for the masts of warships. After the war, I heard that they cut Coca-Cola bottles in half, and polished them to make cups. At a time when people had nothing, those sold really well. It was then a period when General MacArthur and the US occupying forces were in place, and demand grew for western style utensils, wine glasses and other items. In 1948 Shimizu Glass began working with Hoya Glass (later Hoya Corporation), and to expand the business we moved to our Katsushika site” Michiyo Shimizu recalls.

The period in the supply chain for Hoya Glass, gave Shimizu the chance to supply to the Imperial Household. But more recently a shadow began to fall on the form the business had taken for close to fifty years.

“In the recession beginning in the 1990s, work began to decline and we had to make a change from our business model based on being a sub-contractor. We stepped out to make our original Edo Kiriko glassworks, and from 1998 began selling directly from our homepage”.

With a workforce to support, Shimizu Glass took a big step into a new era. An important landmark in this process was in 2012 when the Tokyo Skytree tower opened complete with a display in Edo Kiriko worked on by Shimizu Glass. This led to media attention, and a chance for many to encounter Edo Kiriko glass. Inquiries increased, and new business opportunities arrived for custom made products. Gifts for guests at celebrity weddings, prizes in J League soccer… the Edo Kiriko seen in public life often has an association to Shimizu Glass. 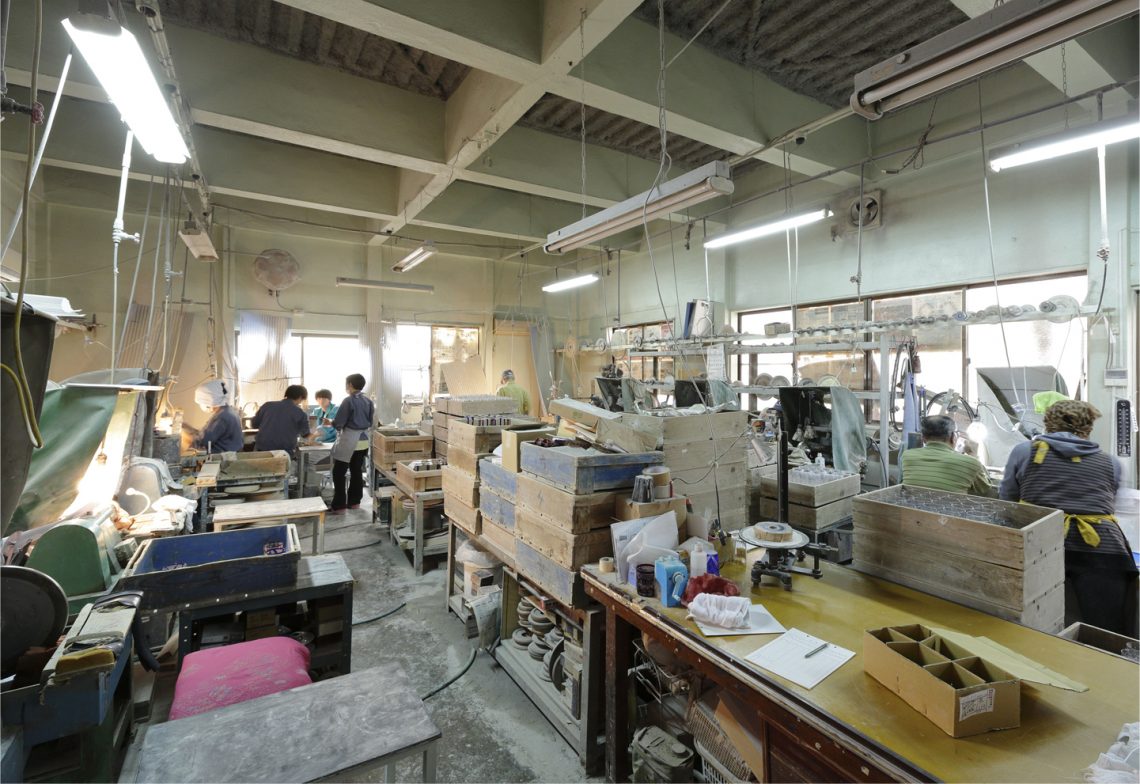 A staff of nine craftspeople work at the Shimizu Glass workshop. The age range stretches from staff in their twenties, to those over eighty. On this day, student interns were also in attendance. 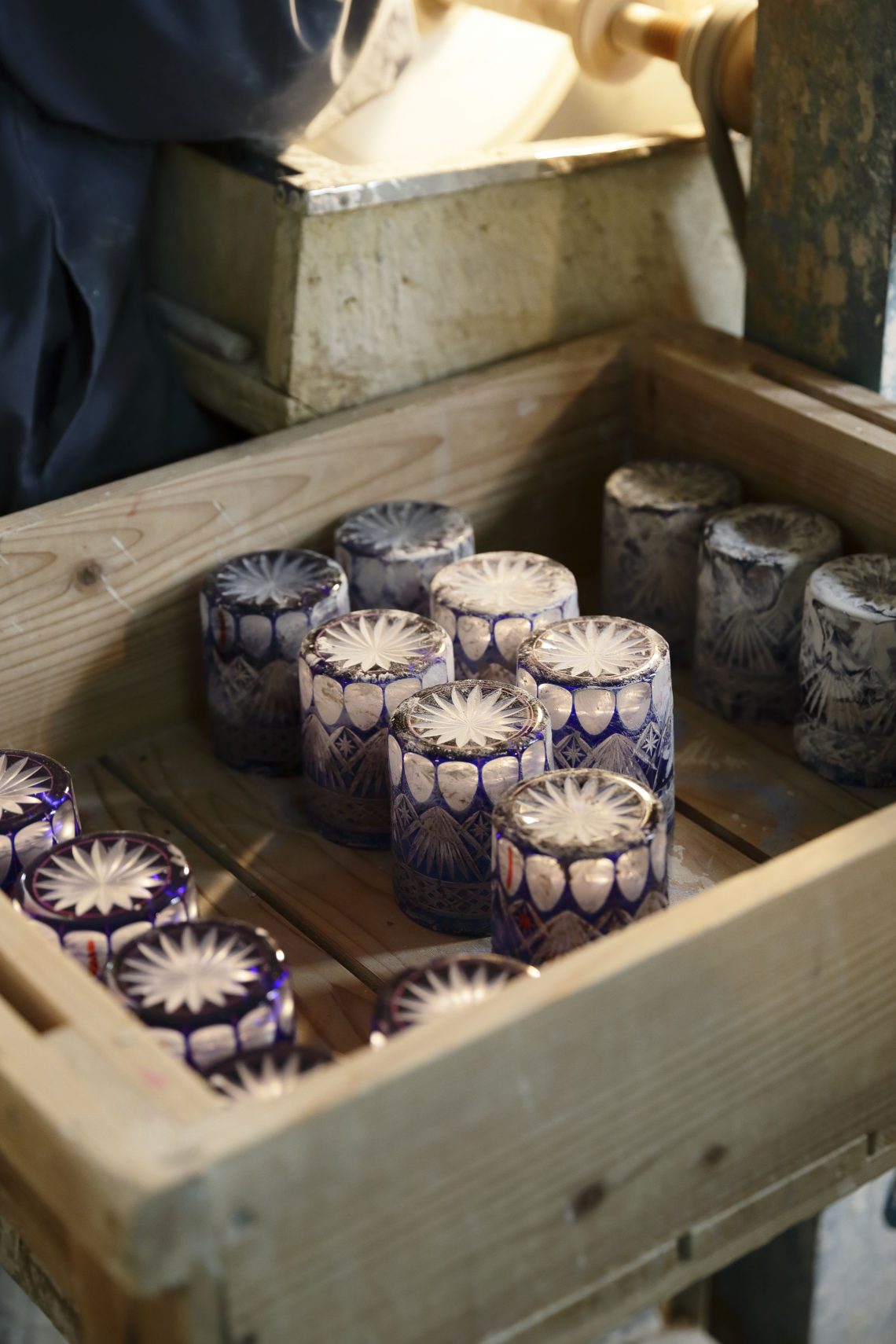 With veteran skills passed to a new generation: a renewed Edo Kiriko

The Shimizu Glass workshop established 94 years ago, includes not just veterans with long histories in glass, but also junior craftspeople in their twenties and thirties. This matches the CEO’s desire to see young craftspeople at the heart of the company’s work as it develops products to meet the needs of a changing marketplace. One example is the result of a collaboration between one such female employee and a designer to produce “Kabukiriko”. Based on the distinctive make up of Kabuki actors, the design was selected for the 2016 Tokyo Teshigoto collection of products.
Despite being shaken by periods of change, Edo Kiriko continues to live strong. This has been achieved through the work of studios such as Shimizu Glass and the craftspeople in them, to protect and develop their traditional work in glass. It is true that many more ages will come, with changing tastes and needs. But just as it charmed those who first encountered it the Edo period with its sparkle, Tokyo’s cut glass will surely continue to impress those that have the chance to hold it in their hand. 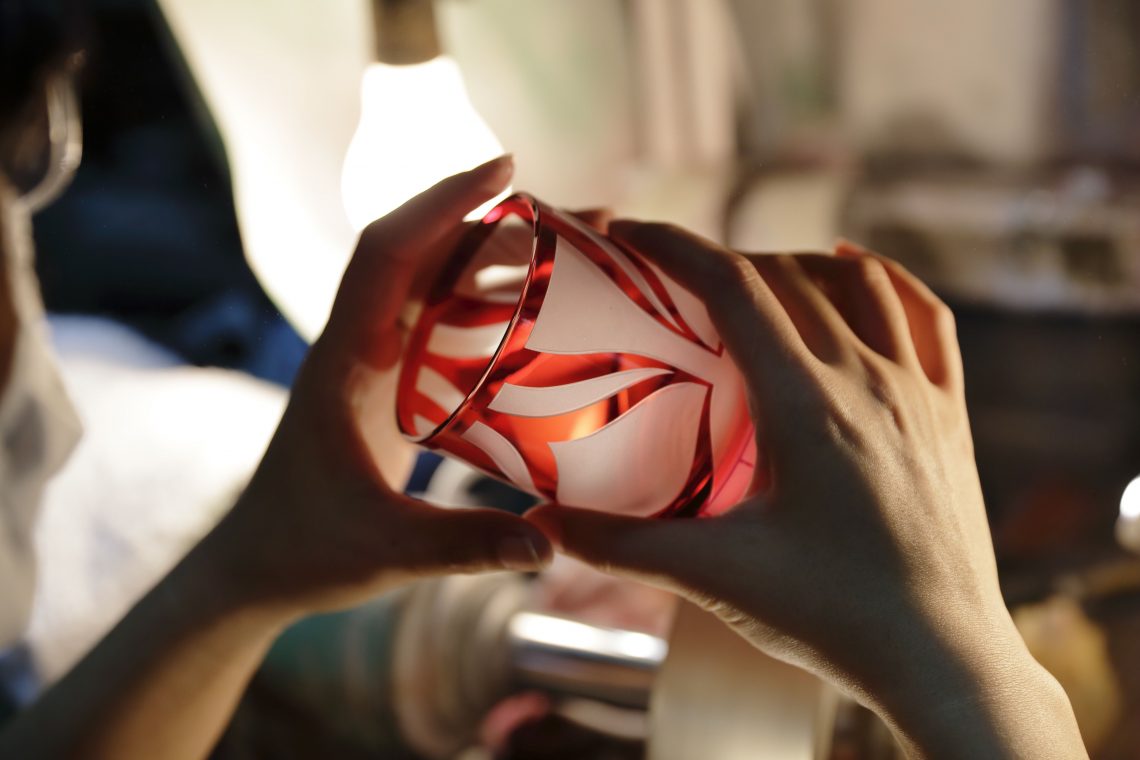 A young female craftsperson works on the “Kabukiriko” design.

It is 94 years since Shimizu Glass’s foundation in 1923. From the left in this picture is Yuichiro Shimizu, the eldest son of CEO Michiyo Shimizu who is pictured centre. On the right of the picture is Nobuhiko, Michiyo’s third son, who has recently joined the business. 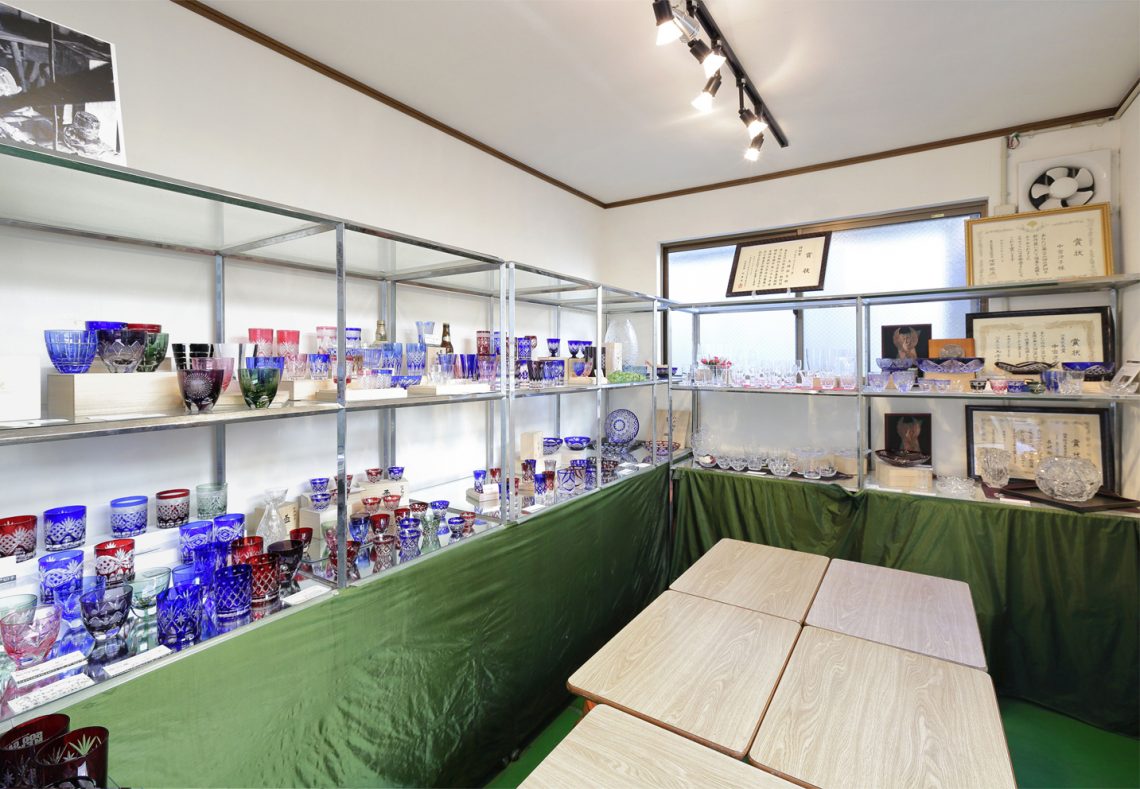 At the Shimizu Glass workshop there is a showroom that doubles as a meeting space. From here they respond to requests for custom made products.