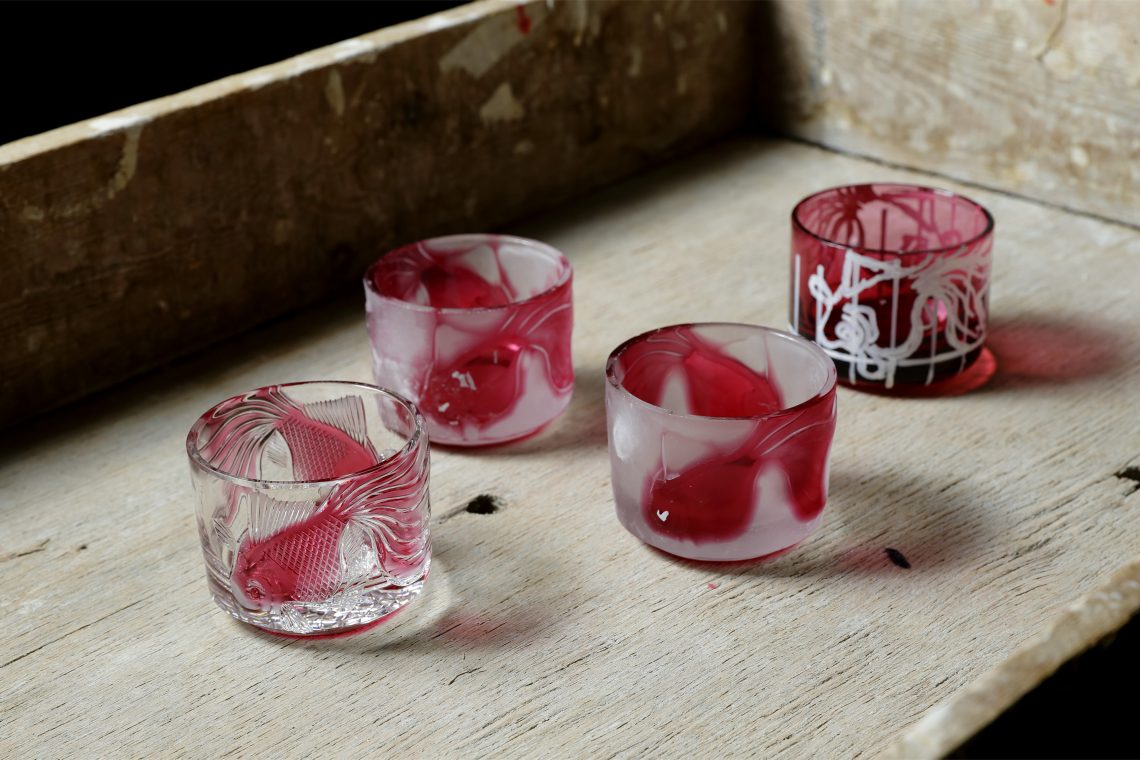 With a wide variety of patterns carved into glass, Edo Kiriko brings joy to people’s eyes. The ‘Kiriko’ in Edo Kiriko is a technique of scraping and polishing using rod-like tools or rotating tools to carve patterns into a glass surface. Recently events with craftsmen holding a glass to a rotating cutting tool to carve in patterns increased, and when seeing how accurately the patterns are carved into the glass cup etc., you can feel the magnificence and splendour of the handwork of the skilled artisan. What you can see at this kind of demonstration, is of course only a part of the whole. The manufacturing process can largely be divided into the 5 steps below.

① Indexing – Lines and points that become the base for later carving are drawn onto the glass surface.
② Rough Cutting – A diamond wheel etc. is used to carve in the lines that become the base for the pattern.
③ Third Processing – A grinder with finer diamonds then the one used in Step ② is used to come closer to the final pattern.
④ Stone Cutting – A pre-step to bringing out the lustre by smoothing out the carvings made in Step ③.
⑤ Polishing – Using a wooden board or medicinal products for polishing, lustre is added to the cuts.

In general Edo Kiriko uses these 5 steps in its manufacturing process, though for each step different artisans might change or add little details. Especially artisans challenging new designs often add new techniques to the traditional steps. 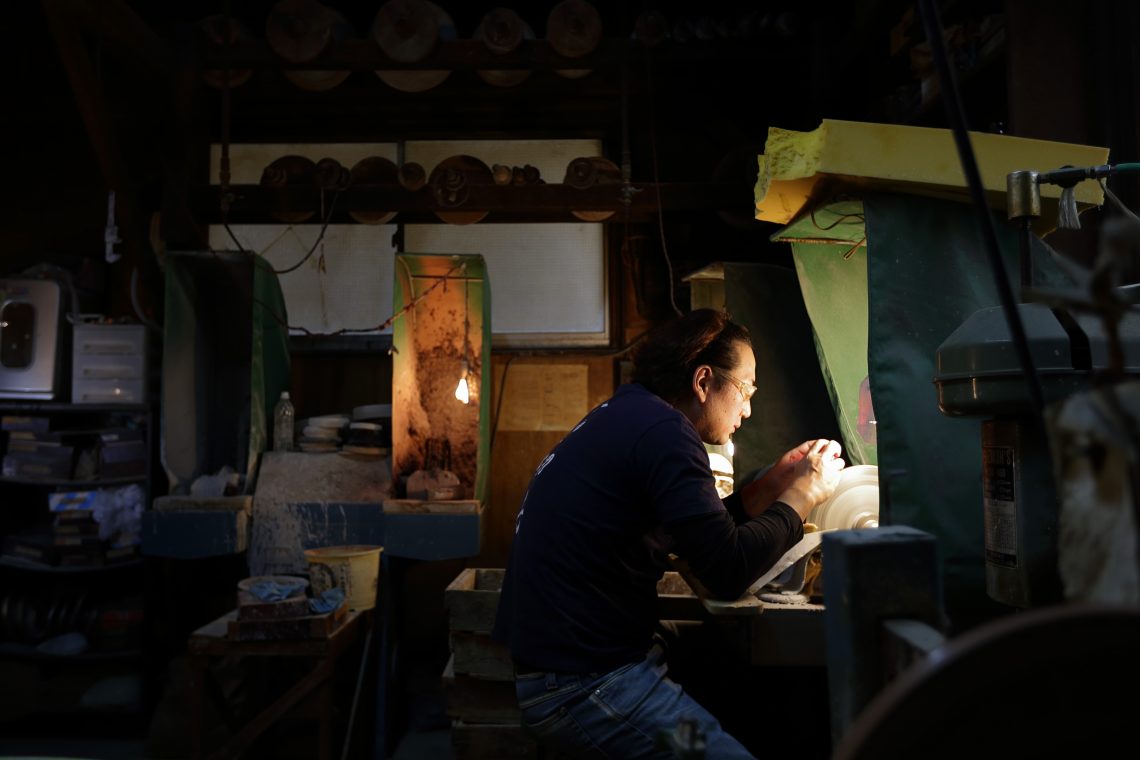 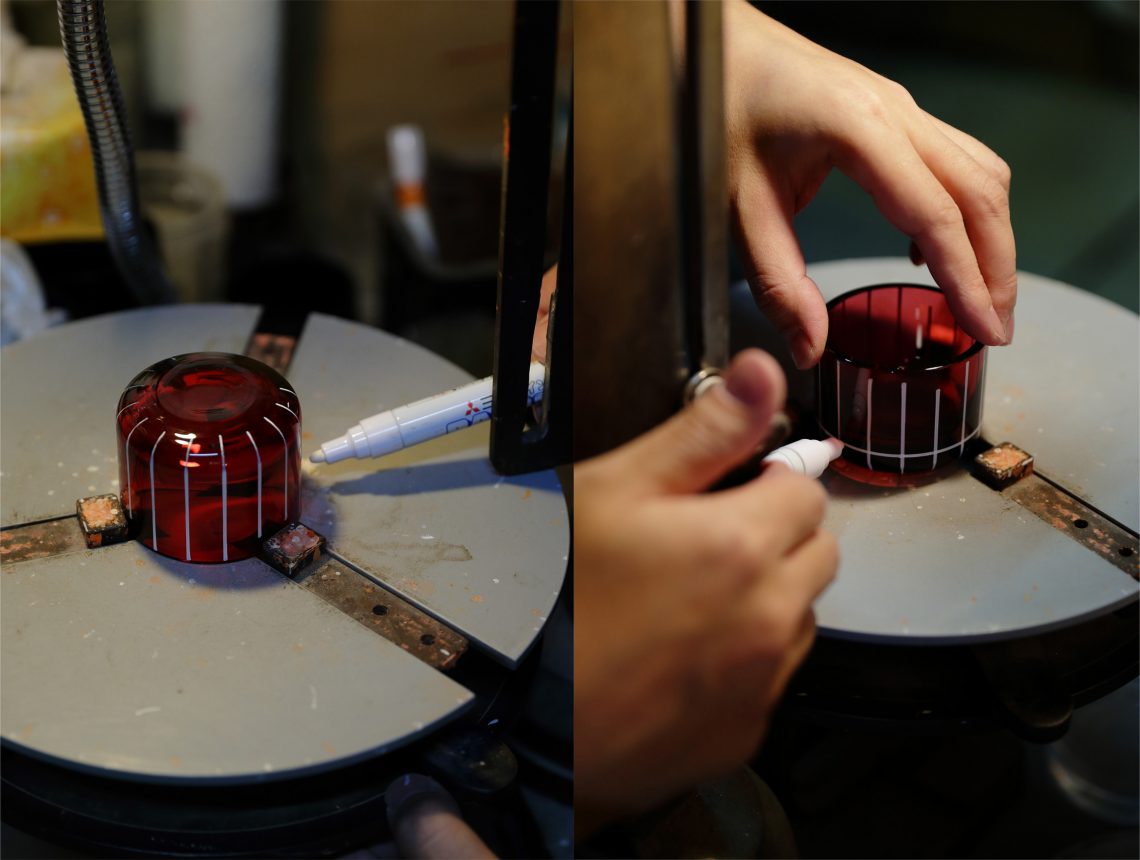 Indexing, the first step in the manufacturing of Edo Kiriko. Equally spaced vertical and horizontal lines are drawn to guide later carvings.

The Edo Kiriko of Mr. Hideyoshi Tadano can be identified as ‘Mr. Tadano’s works’ with only a quick glance. While traditional Edo Kiriko usually features many geometric patterns of intersecting straight lines, Mr. Tadano chooses lively motives such as animals and scenery. For example his glass design called Kingyo, or ‘Goldfish’, utilizes curvy lines for the tail fin, and a relief for the body to create a three-dimensional effect. The guiding lines in the ‘Indexing’ step are drawn with a width of about 1 centimetre, after this the shape of the goldfish is drawn freehand. In the first ‘Rough Cutting’ step, only certain parts like the fins of the goldfish etc. are carved, most of the outline is then carved in the ‘Third Processing’ step. When the outline is settled, another ‘Rough Cutting’ phase is added to carve the red glass that is not part of the goldfish. Most of the red glass layer that was upon the rest of the glass is carved away, which is unique by itself. Through this process a red goldfish swimming in clear water emerges. In the ‘Polishing’ step, after the polishing with medical products, different parts are polished differently to give more gloss or more frosting, creating brilliant textures of goldfish and water. 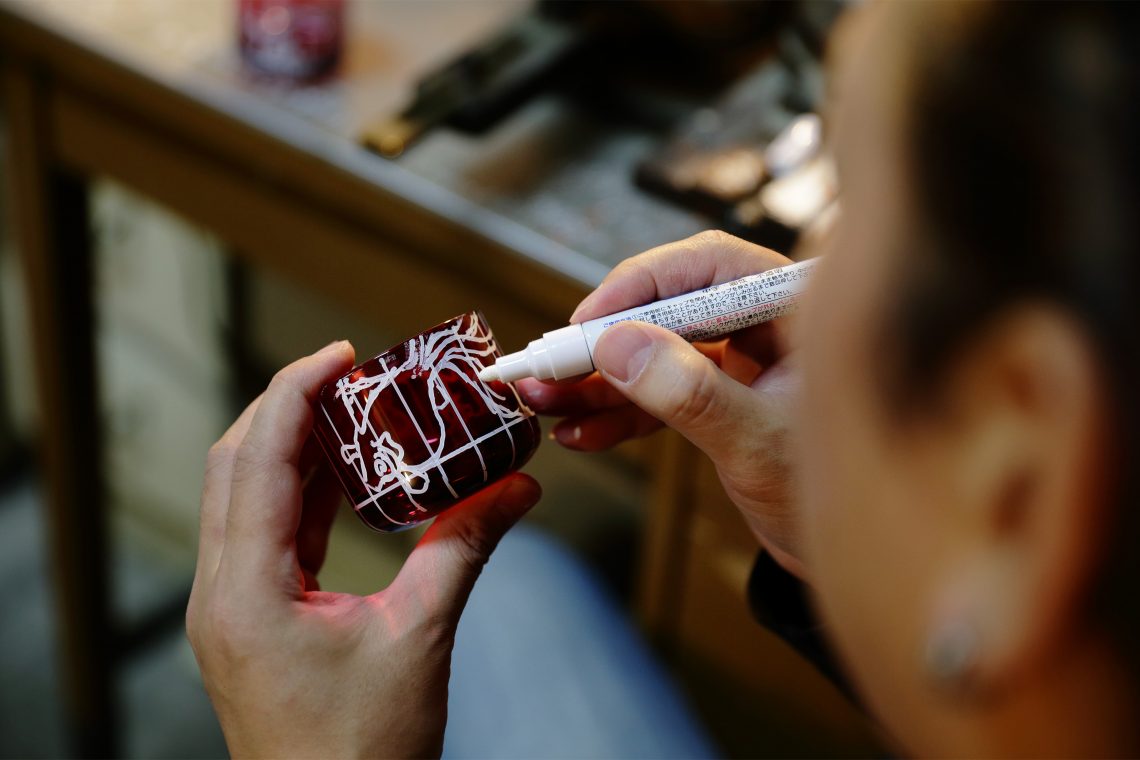 ‘Indexing’ of the outline of the goldfish freehand. 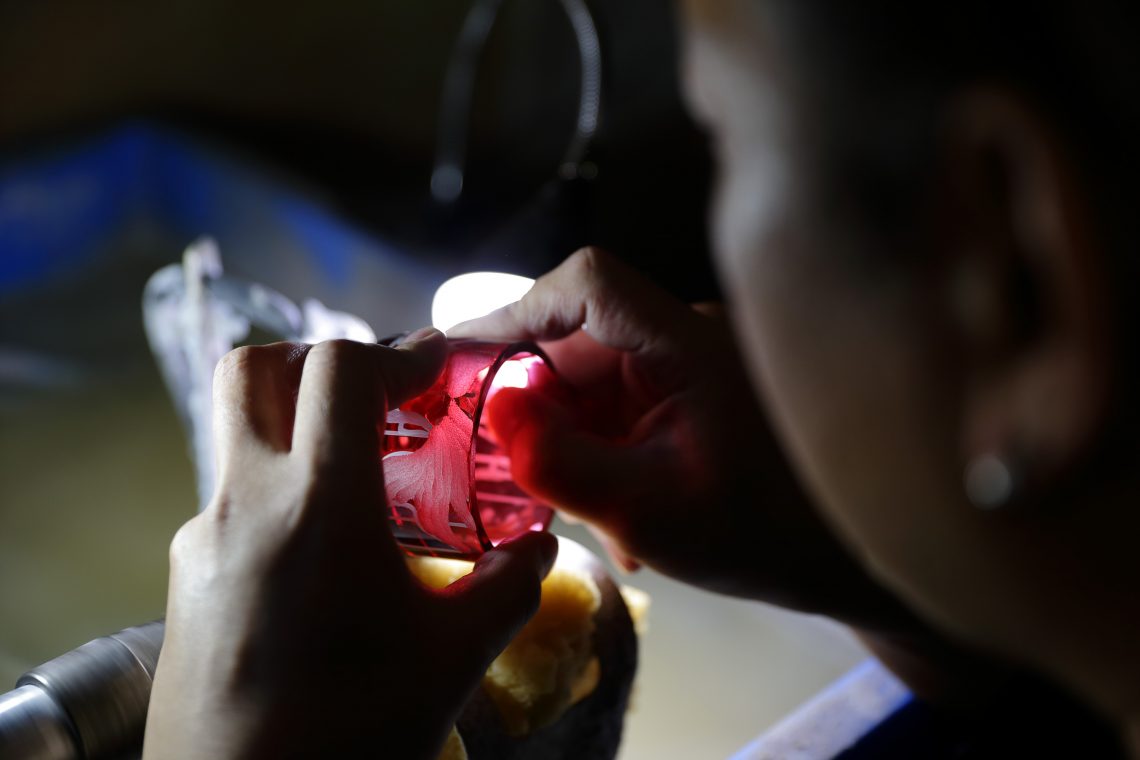 ‘Rough Cutting’ of parts of the goldfish, like the fins, in this step. 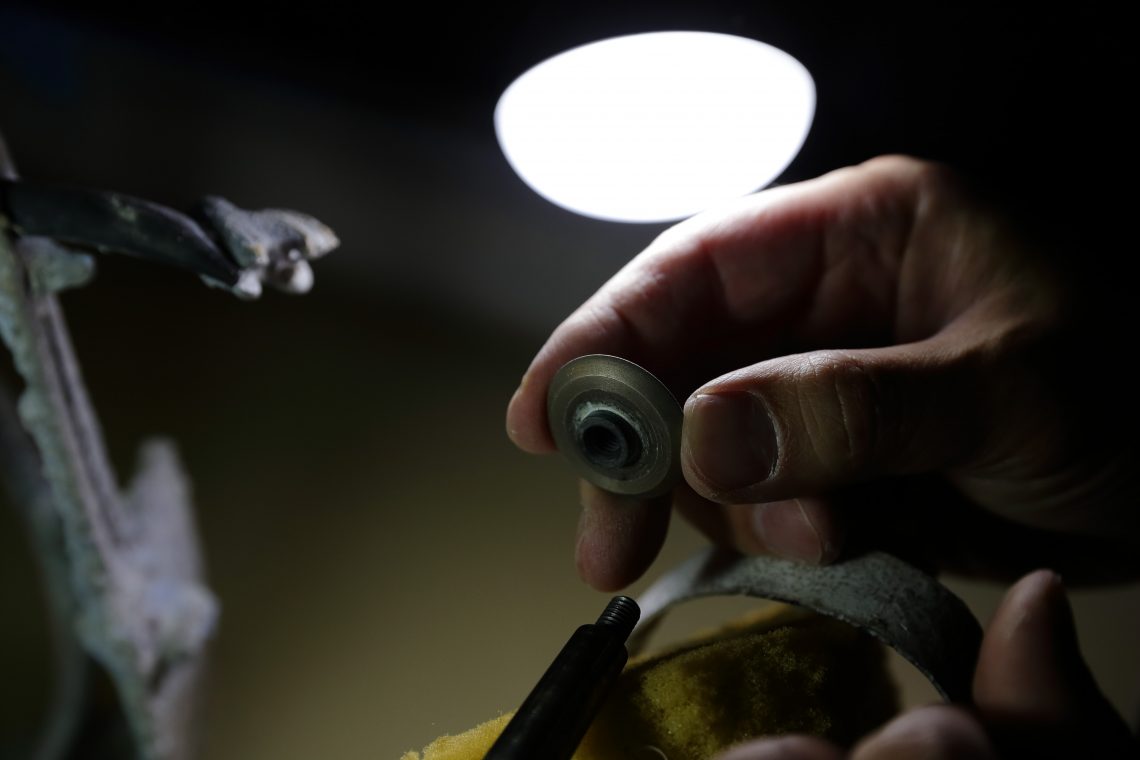 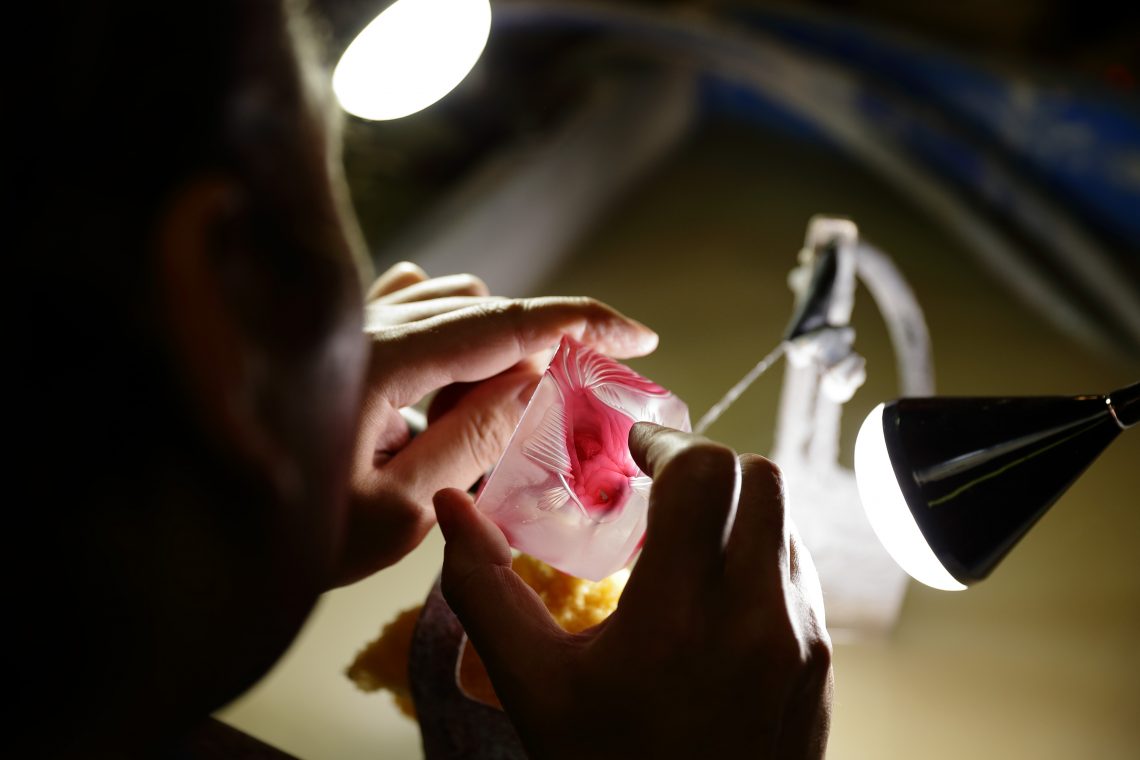 Finishing the outlines in the ‘Third Processing’ is followed by another phase of ‘Rough Carving’ to scrape away the red glass that is not part of the goldfish. 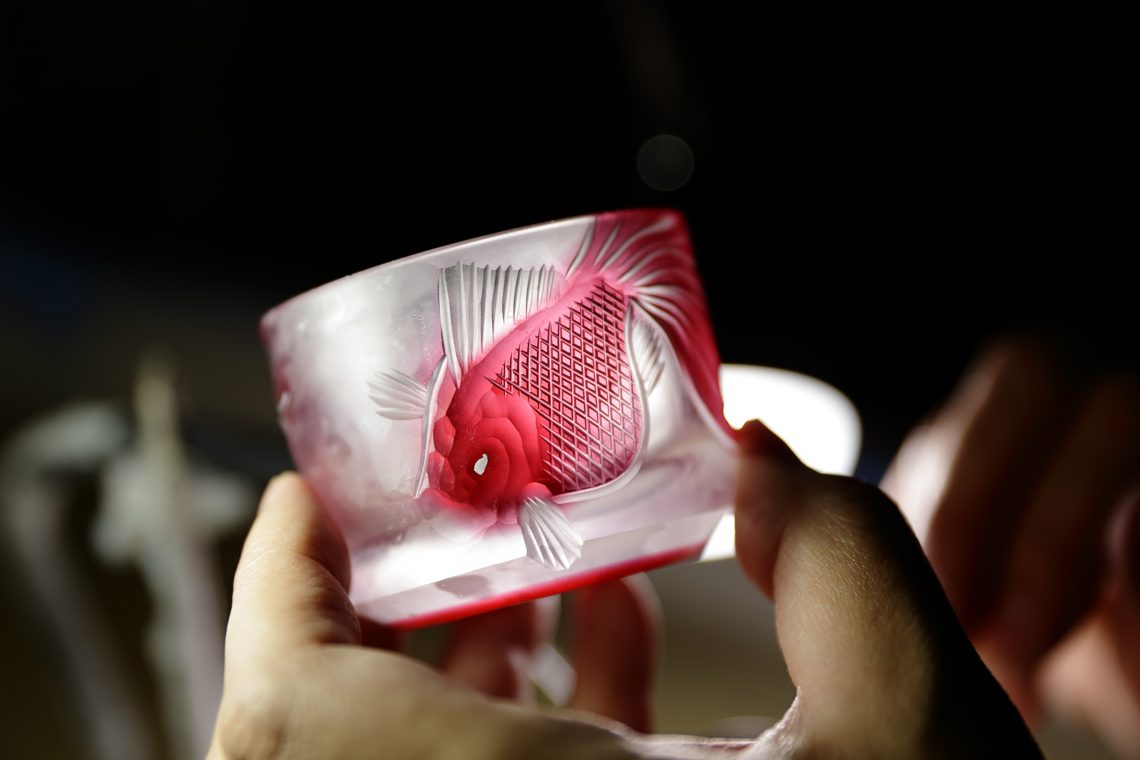 The carved fish scales became goldfish-like. After this a chrysanthemum pattern is cut into the bottom side of the glass, followed by the steps ‘Stone Cutting’ and ‘Polishing’.

How were the unique expressions found in the artistry of Mr. Tadano born? Mr. Tadano did not aim to become an Edo Kiriko Artisan from the beginning. For about 2 years he worked as an employee for an architectural design office, though when he saw a work of his father, the founder of the Tadano Glass Processing Factory, that won an Edo Kiriko Union Contest, his perspective on Edo Kiriko changed, he says. “I went out to the world to search for a place to express my design ideas, though there was a place for me to do so right there all along.” After experiencing the world outside, Mr. Tadano said “there must be more methods of expression”, realizing the possibilities that Edo Kiriko provides. Having worked in architectural design also allowed him to polish his drawing skills. Upon looking at the sketch book in which Mr. Tadano draws motives he wants to express through his glass works, we found closely packed a variety of designs, such as tigers, lizards, fishes and sceneries. Undoubtedly Mr. Tadano will go on to craft many more Edo Kiriko with his skills and ideas born from his unique designs. 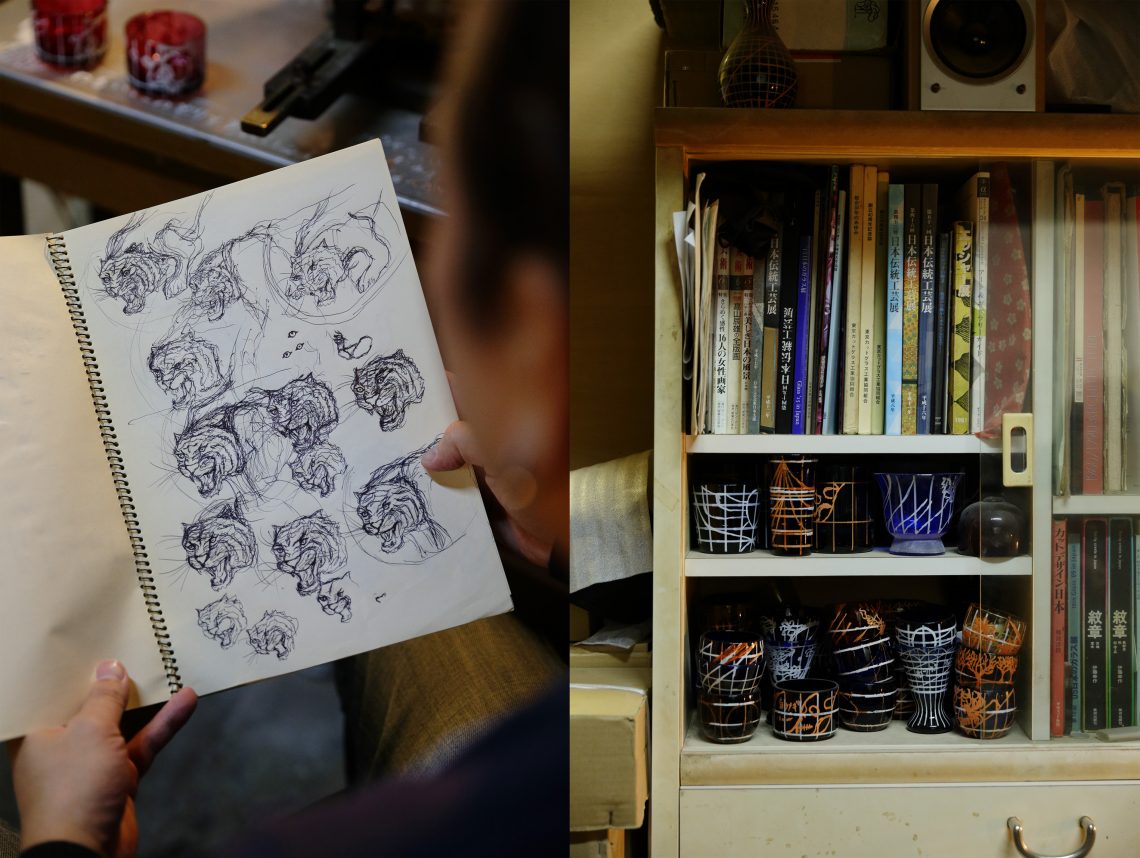 A sketch book full of Mr. Tadano’s ideas (to the left). A corner of the workshop of Mr. Tadano. Glasses with unique ‘Indexing’ lines are stored in the bookshelf, together with picture books of animals and plants, and pictorial records of art exhibitions and materials (to the right). 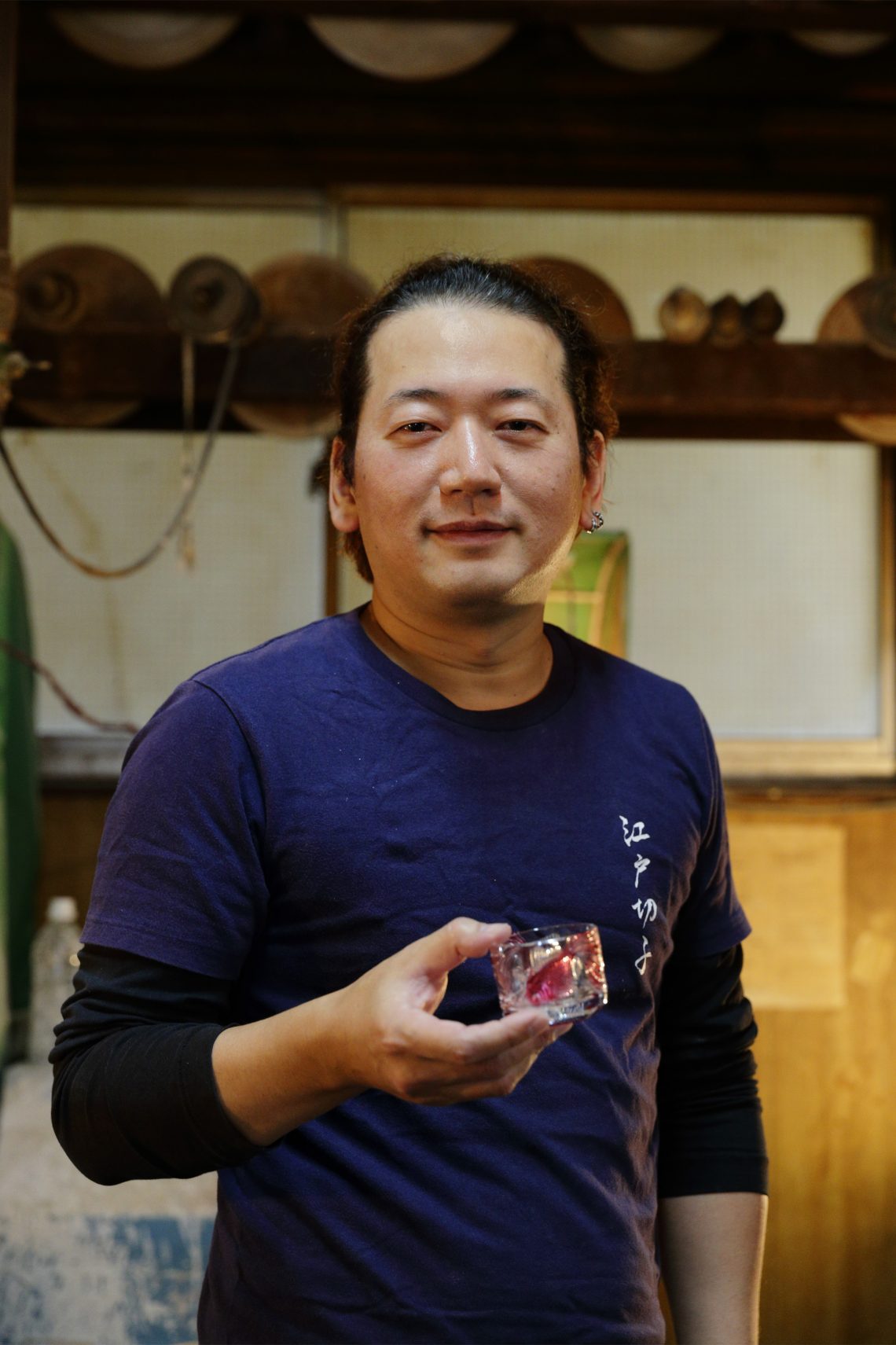