The Tokyo Handicraft Exhibition 2021 was held at the Mark’ Style Tokyo GINZA SIX store between February 19th (Friday) and March 7th (Sunday). One of the workshops in which it was possible to experience what it feels like to be a craftsman that was held in one corner of this was the kumihimo (braided cord) bracelet production workshop. 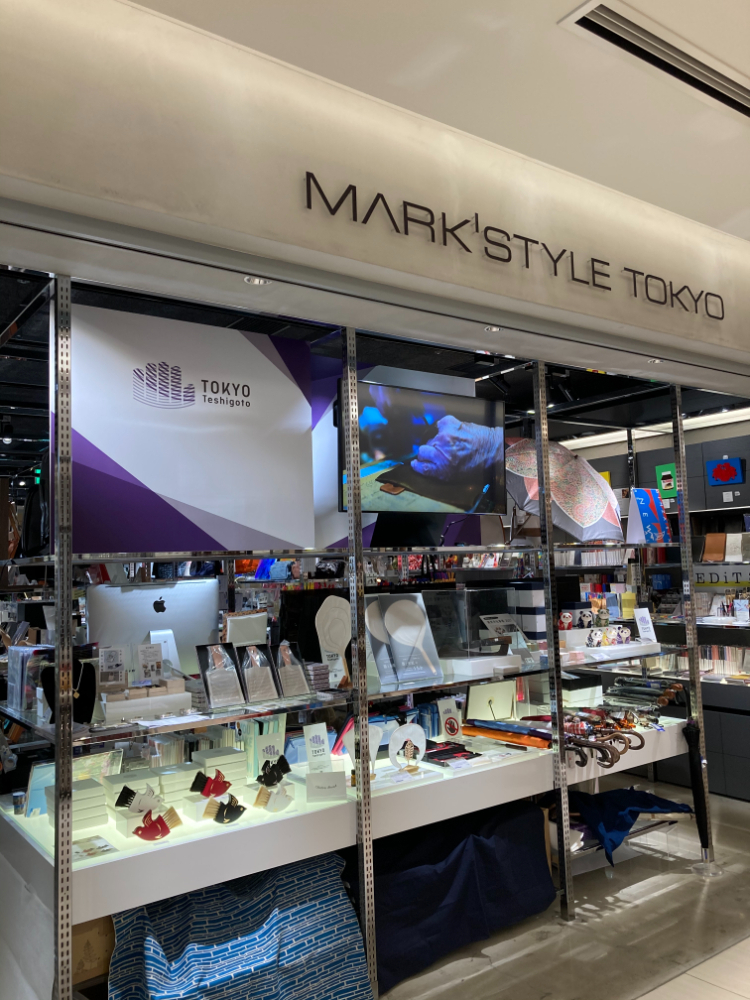 This is a report on the hand-braided kumihimo experience workshop, about which many people are saying “it emptied my mind,” “it shut out everything else and left me feeling refreshed.”

Our instructor was Yamaguchi, a multi-tasker involved in the wide-ranging fields of everything from design through to production, sales and PR for organic kumihimo manufacturer Domyo, a well-established company dealing in braided cords at Ueno Ikenohata, Tokyo, ever since it was first founded in 1652. Having entered the company after being influenced by his grandfather and father, both of whom were kumihimo craftsmen, he has since become the main instructor at the kumihimo workshop, about which he laughs “our style of teaching follows the strict Spartan style.” 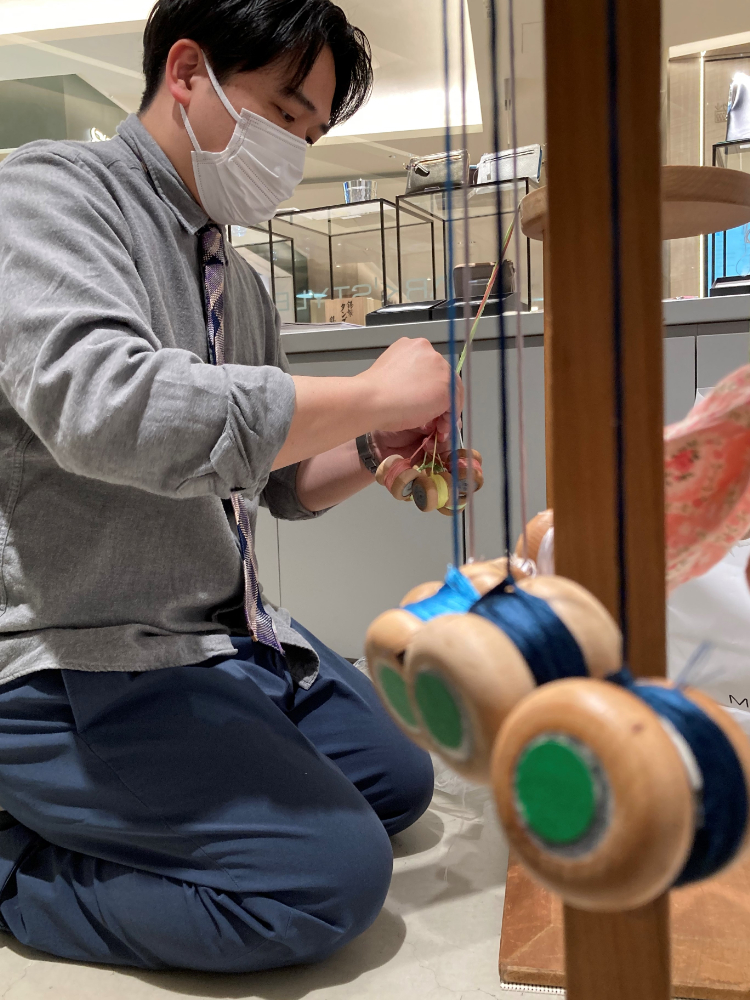 The charm of Yamaguchi lies in his gentle demeanor

The items that we made during the workshop were the fun Nara-Kumi cords consisting of two lines of base colors and a double array using three colors. This style of weaving was introduced to Japan from China between the Asuka and Nara periods, and it was used for the haishoku pendants that were hung from the waist for decorative purposes, and for the kijoku welting on doilies placed in the center of tables, and many examples of this are archived in the Shoso-in Treasure Repository. 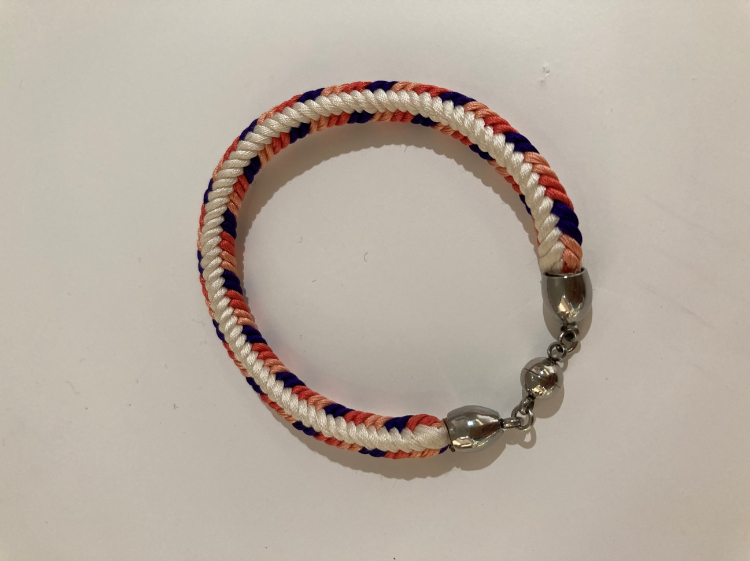 The main feature of the Kumihimo Hands-on Workshop hosted by Domyo is that it uses many tama (bobbins onto which thread is wound). Most of the kumihimo workshops in tourist areas tend to use between four or eight tama, but the Domyo workshop uses twelve. The more tama used, the thicker the cord becomes and more detailed the joints, which produces a fuller weave.

All of the silk threads used have been hand-dyed by Domyo craftsmen. The threads to be used are selected from samples that have been braided in advance to provide a clear idea of what the end product will look like, and they are then laid out on the circular weaving block. The cords braided on the weaving block while sitting on a chair produce custom-made Domyo cords. Normally, they are braided while sitting on the floor.

The top surface of the weaving block is known as a “mirror” because it is polished to a fine smoothness to prevent the threads from getting caught. The fact that the cords braided reflect the kinks, habits and center of gravity of the braider’s body is another reason why this is known as a “mirror”. It is said that braiders who are enjoying their work and perform with enthusiasm produce firm cords, while braiders who weave while anxious produce distorted cords.

Twelve threads in combinations of three are placed on the weaving block in a shape that resembles a four-leafed clover. The six light-colored threads are known as the base colors, and the three combinations of two dark-colored threads are known as the pattern colors, but an ironclad rule for braiding the Nara-kumi that we were working on calls for the same colors to be laid out abutting each other. The thread at the front is replaced by the thread on the far side, and the cord is braided by making sure that the same colored threads are situated beside each other. 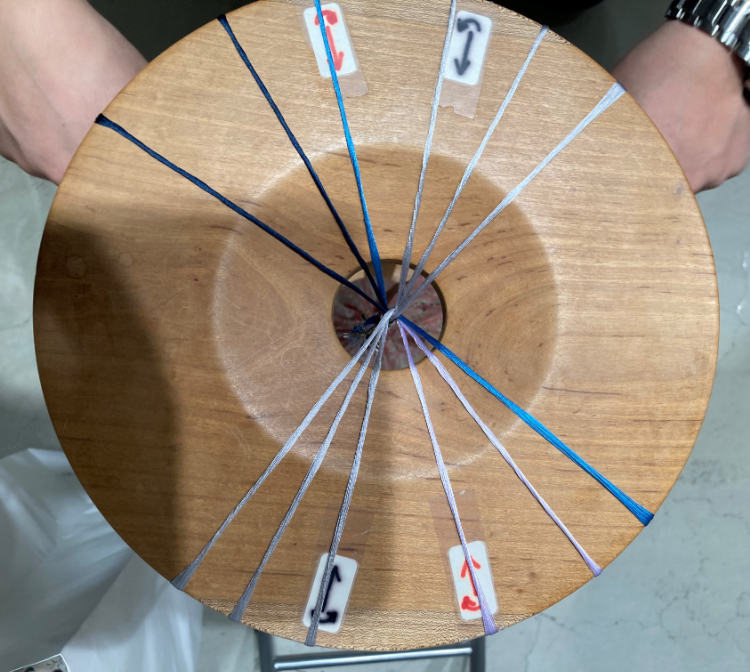 The threads held in the hands are rotated and moved to the opposing outer side. Then, without changing the position of the hands moved, the threads on the left-hand inner side are scooped up with the right hand at the front and the threads on the right-hand inner side are scooped up with the left hand at the back, and then the left and right threads are moved in a counterclockwise direction to each of the outer sides. This process is repeated to braid the cord.

The threads laid out on the weaving block are twisted. Twisting them adds a fullness to the joints and produces luster, and it also increases stretchability. However, the twisting tends to loosen when the threads are moved, and this allows the thread to become flat on top of the weaving block. Leaving it like this will create an impression of the joints being blurred and loose, so the thread is twisted by rotating the bobbins. 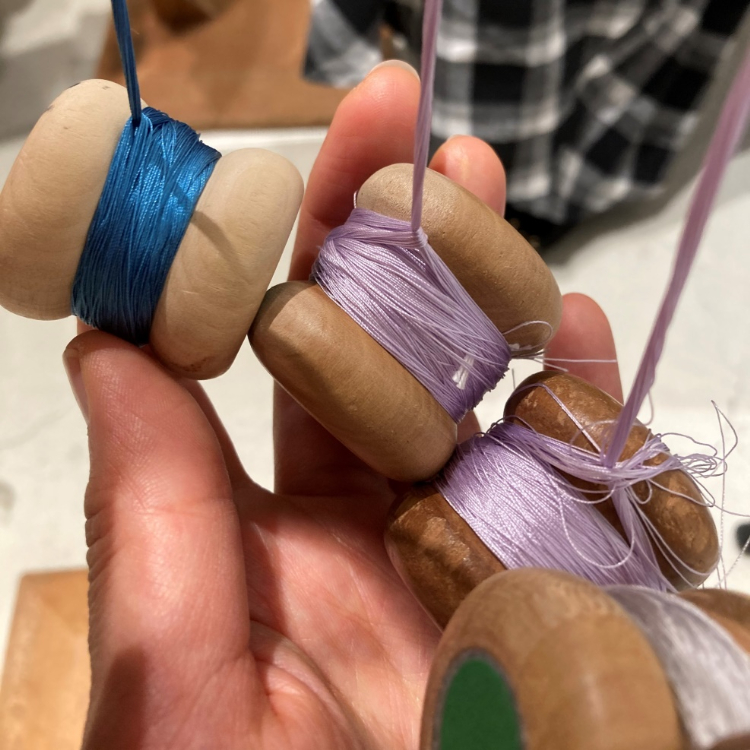 Yamaguchi asked us if we noticed the moment when the thread appears to glitter. “That is a sign that the degree of twisting is just right,” he added. I tried to observe this while twisting the thread, but it is difficult for amateurs to notice, and unfortunately I was unable to confirm it in the end.

Yamaguchi then showed us how to perform the tama oroshi (unwinding the bobbin) process to attain the correct length of thread leading out from the tama. As he performed tama oroshi using a beating motion similar to pounding rice at exquisite timing while making sure he did not obstruct the hand that was involved in braiding reminded me again of the amazing skills of craftsmen.

A different color being mixed in with the base color and three colors lined up together are a sure sign that a mistake has been made during braiding. This results in the braided cord swelling or collapsing, so this situation can be confirmed not only with the eyes, but also with the fingers. This experience introduced me to the joy of realizing that I was getting a little closer to the sensibilities of a craftsman. 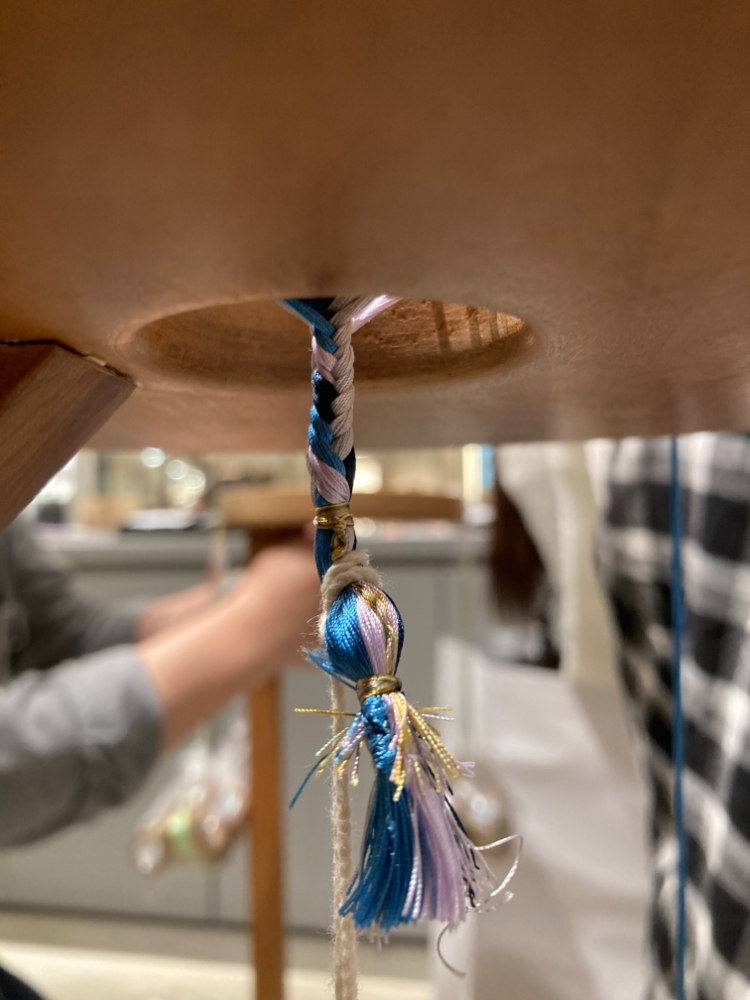 The braided cord extends from the bottom of the weaving block

Moving two threads from the inner side to the outer side and repeating this six times results in all twelve threads being moved to create a single-line pattern consisting of three colors lined up in two arrays. When a second line is braided and the thread movement repeated twelve times, the twisted thread becomes loose and the tama have to be rewound to twist it back into place.

Yamaguchi explained that it is important to maintain a predetermined rhythm without halting hand movement during braiding while displaying his practiced skills.
He added, “If you halt your hands and rest, there is a chance that the way in which the joints are aligned will differ to what you have achieved up until then when you restart. Owing to this, using the same rhythm, the same line of sight, the same posture and, even, the same sensibility to braid evenly without resting your hands creates the most attractive cords.”

To my unpracticed hands, I tended to hesitate and rest my hands when deciding which thread to take, what direction to move it in, and where to place it. However, I gradually became more keenly aware of right and left and was able to empty my mind while counting, and before I knew it, my hands are moving quite naturally. And, just when my body began to sway in time to a pleasant rhythm that this results in, it was time to leave the weaving block, which generated a sense of sorrow. 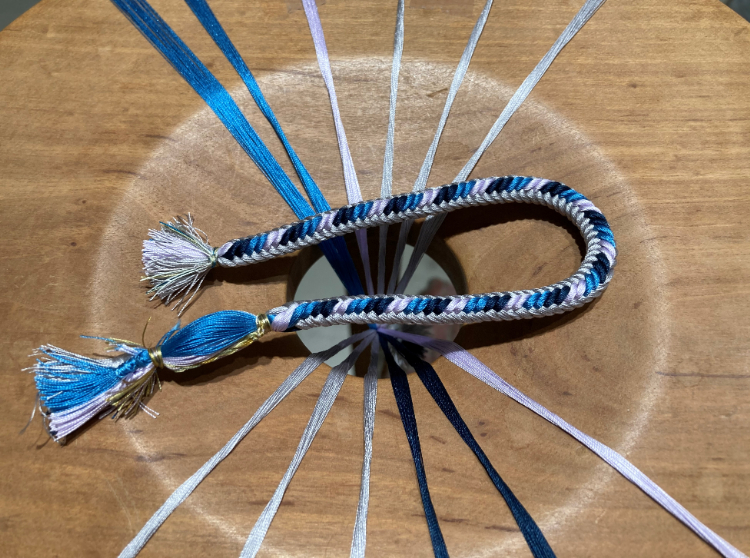 Yamaguchi attached the metal clasps to the kumihimo cords produced by a German surgeon, who also took part in the workshop, saying that the work was so neat that he would request him to apply the sutures the next time he had surgery.

The red and light wisteria colors used against a base color of new verdure creates a charming image of spring. The indigo and lapis lazuli colors used against a base color of silver-gray conjures up an image of early summer or the end of winter. And, the persimmon and reddish-purple colors on the third cord represent the autumn, to complete a total of three braided cords that symbolize the four seasons. 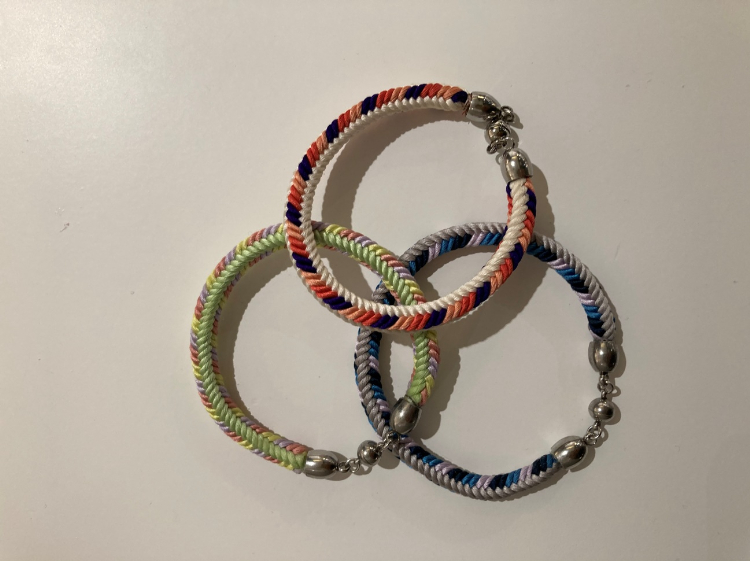 Commemorative photograph of the sample cords braided by a workshop participant

Changing the layout of the color scheme, which is known as garaoki, and the braiding methods to create completely different patterns despite using the same colors is one of the charms of kumihimo cord braiding. Yamaguchi explained that using patterns that reflect scenes and events observed with one’s own eyes, and sometimes referring to paintings from various times and locations, enables the cords to be designed in a way that weaves different stories into them. Being able to symbolize a rich and abundant world within each thin line is probably the real charm of kumihimo braided cords.

While appearing simple in light of the fact that anybody is able to braid kumihimo cords, they also make one feel as if they contain a limitless depth. It was very pleasant to empty my mind and forget about everything else, and this made me want to braid more and more cords. 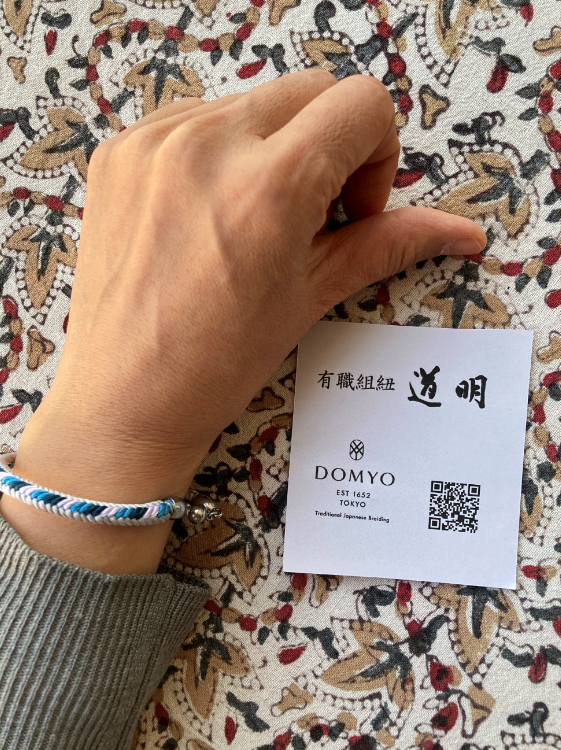 The joy of wearing a kumihimo cord that I braided myself

The Domyo Kagurazaka Gallery in Tokyo hosts the “First Experience at Braiding Kumihimo Cords” workshop on a regular basis. In addition, lessons are available on a reservation basis (at an additional charge) at the Kagurazaka classroom for people who wish to learn more, and Domyo Ancient Cord Braiding Classes that have been held throughout the country for more than 40 years are also available featuring instructors who are craftsmen themselves or students who are as skilled as craftsmen, headed by a lady who is over 80 years old.

The idea of having fun while learning braiding techniques and eying a future in which one could actually become a craftsman oneself may not only be a dream. If you are interested, I suggest that you apply to take part in this experience.