Craftsmen that Materialize Emotions, Connecting them. 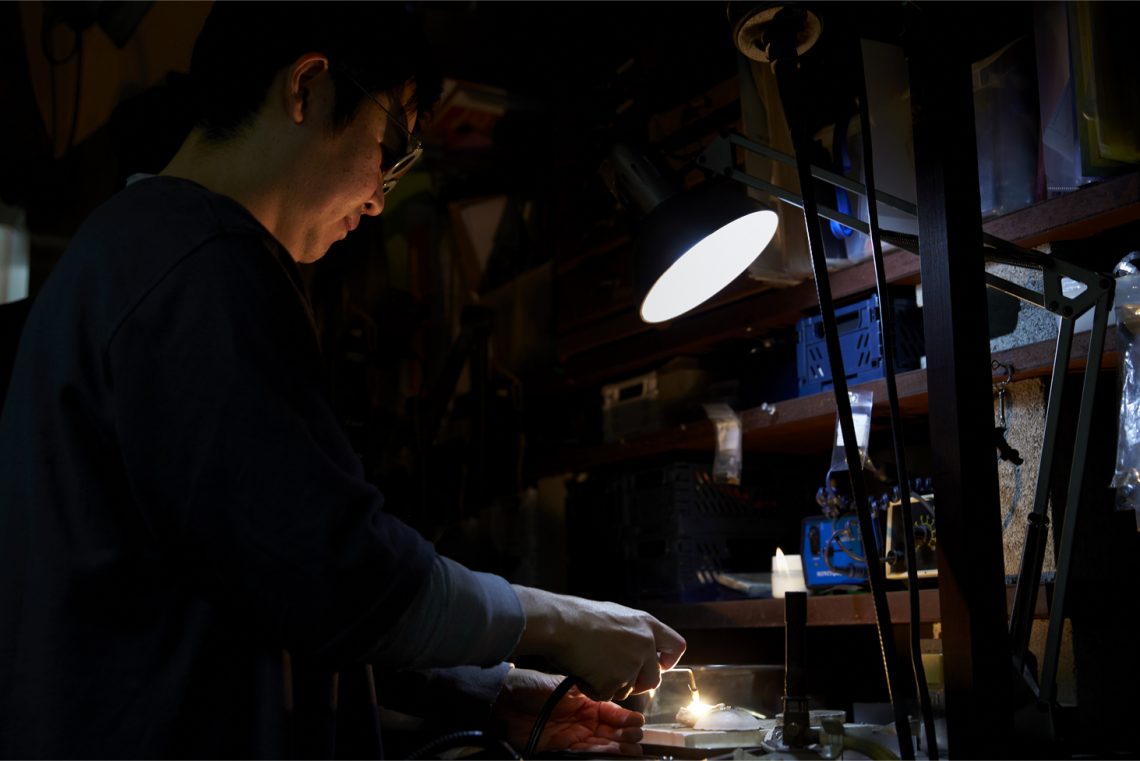 A jewellery shop located in downtown Morishita in Tokyo.

In the Koto ward, where the traditional appearance of the downtown is preserved, you can find the Fukagawa area. Walking from the ‘Morishita’ station of either the Toei Oedo Line or the Toei Shinjuku Line, after a short while you arrive at the entrance of the ‘Takahashi Norakuroad’ shopping street. All around you can see plush dolls and signs of the Norakuro (an anthropomorphic dog and titular protagonist of the Norakuro manga series) decorating the shopping street. The creator of Norakuro, Mr. Suiho Tagawa lived in the Koto ward from childhood to adolescence. In the Morishita Culture Centre ahead of the shopping street, you can also find the ‘Suiho Tagawa Norakuro Museum’. The road until here is called the ‘Takahashi Norakuroad’.
The Jewelry Sashou is located midway the ‘Takahashi Norakuroad’. Facing the road is the shop, and in the back is the workshop where the third generation craftsman of the jewelry Sashou, Mr. Shinichi Sashou was busily moving his hands. 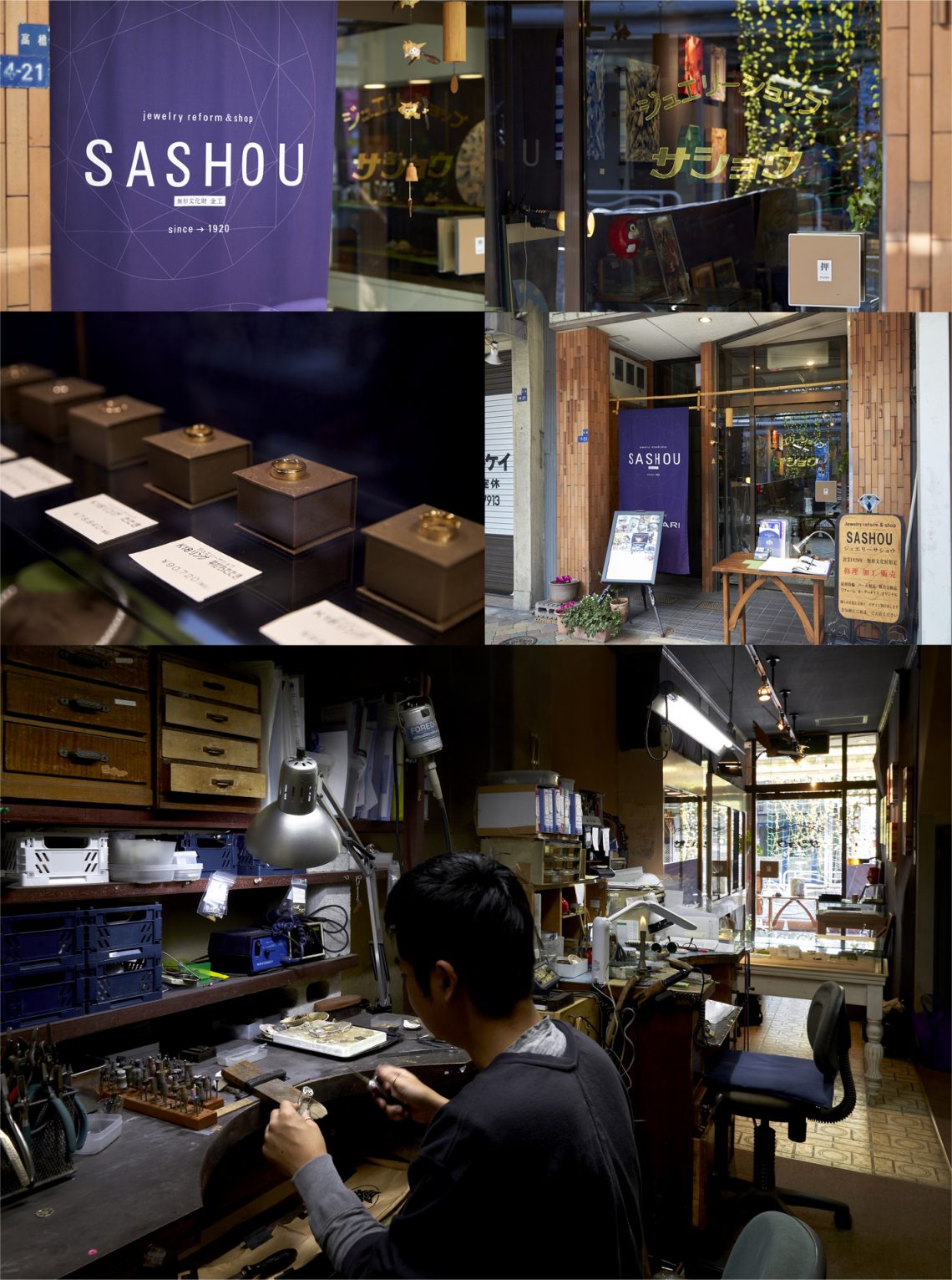 Shop and workshop of the Jewelry Sashou, located midway the ‘Takahashi Norakuroad’.

The fusion of inherited traditions and new techniques.

The Jewelry Sashou was founded in 1920. The first generation was Mr. Shinichi Sashou’s grandfather. ‘At the time of my grandfather, our workshop crafted order-made hairpins and obidome (knuckles for obi belts) for Tatsumi Geishas (Geishas of the Fukagawa Area of Edo (modern day Tokyo)).’ To match the aesthetic eye of these customers, which matched their social standing with their chic, doubtlessly high skills and creativity were required. ‘Today only few workshops remain that can craft orthodox style hairpins, so even nowadays sometimes people hear rumours about our hairpins and then place orders with us.’ Crafting of order-made jewellery always starts with a thorough conversation with the client. What kind of situation will the jewellery be worn? What kind of image is desired? After attentively talking with the client, Mr. Sashou enters a ‘neutral state’ as he calls it, and goes on to craft the jewellery. He shows us a sketch of an obidome drawn in accordance with the client’s image, to wear during his hobby of ‘Shibu’ (traditional Japanese dance). With sketches like these as base design, wax is used to craft a model. Upon the client’s confirmation of this wax model, a final image can be formed together with the client. Mr. Sashou picked up the wax modelling techniques from the outside world during his youth. For a period of time he studied under a wax prototype craftsman, and Mr. Sashou says this gave him the tools and skills to be able to do so. 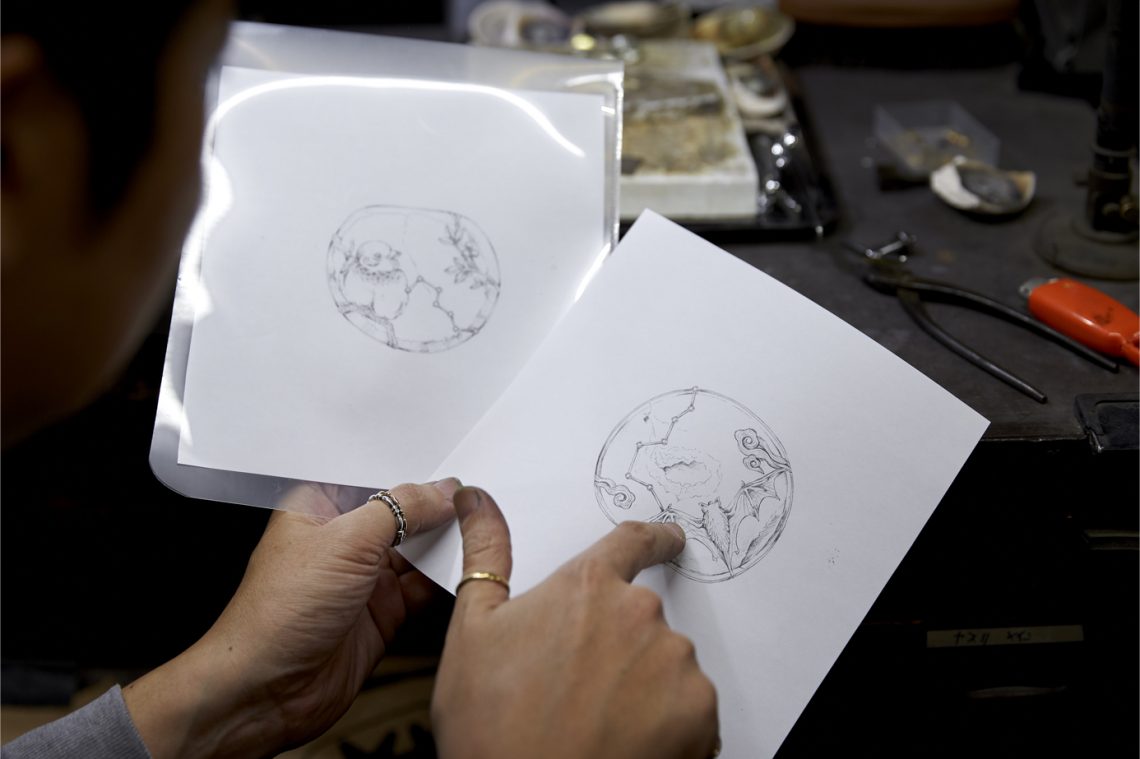 A sketch of the client’s image of the order-made obidome, drawn together with the designer. 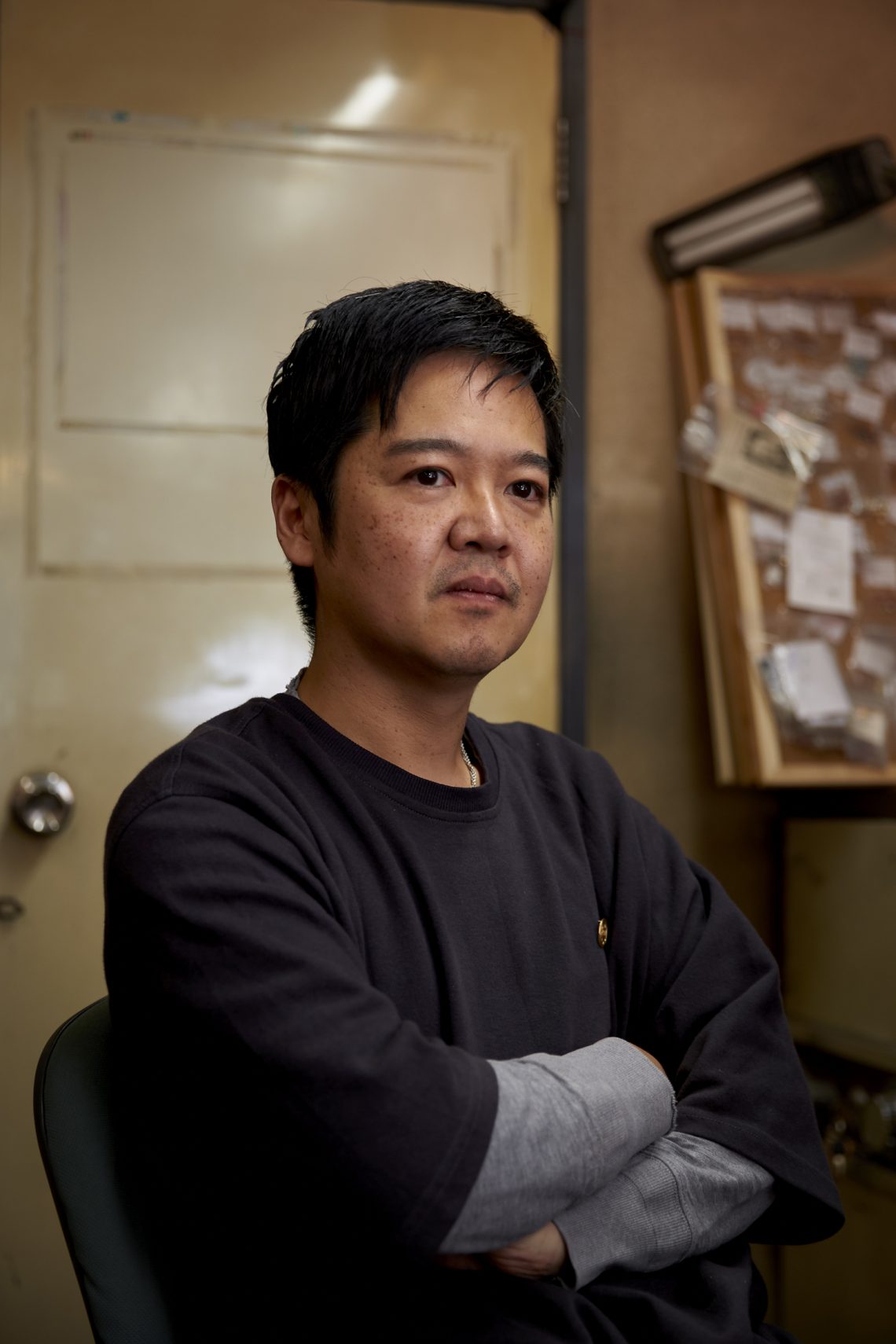 Craftsman in the third generation of the Jewelry Sashou, Mr. Shinichi Sashou

The Jewelry Sashou receives many reform requests from all over the country. It is rare to reuse the bullion of the ornament to be reformed. Most other workshops will purchase the bullion, and recraft the ornament with a new bullion, though the Jewelry Sashou takes pride in ‘bringing to live’ the bullion of the original ornament, and thus ‘connecting’ memories. Taking out precious stones from the ornament, heating it with a burner and removing impurities, heightening the purity. The bullion melted with high temperatures radiates light like the sun, depending on the jewellery to be crafted, sometimes gold, platinum etc. are also added and alloyed. As every step, casting, hammering and engraving is performed here, the craftsman has a wide width of expression, allowing him to craft the jewellery exactly to the client’s liking. 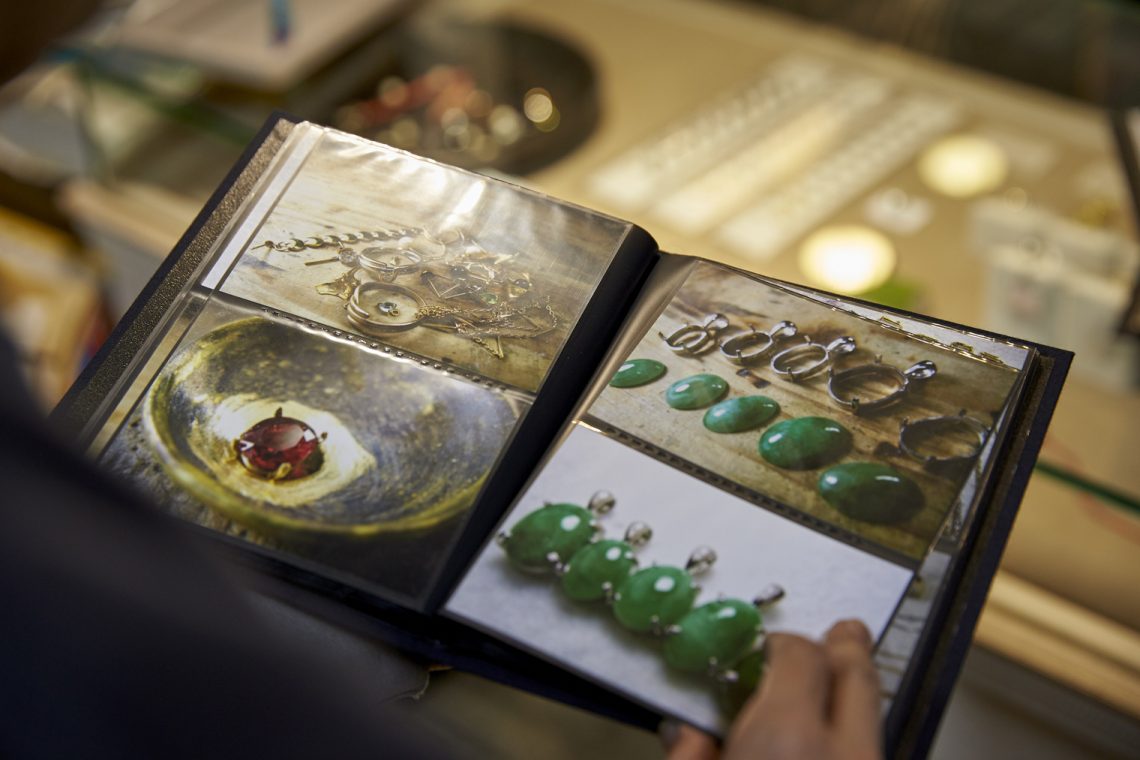 Photo documents of original jewellery and their reformed counterparts. Looking at pictures like these, it is often possible to share the mental image of the client. 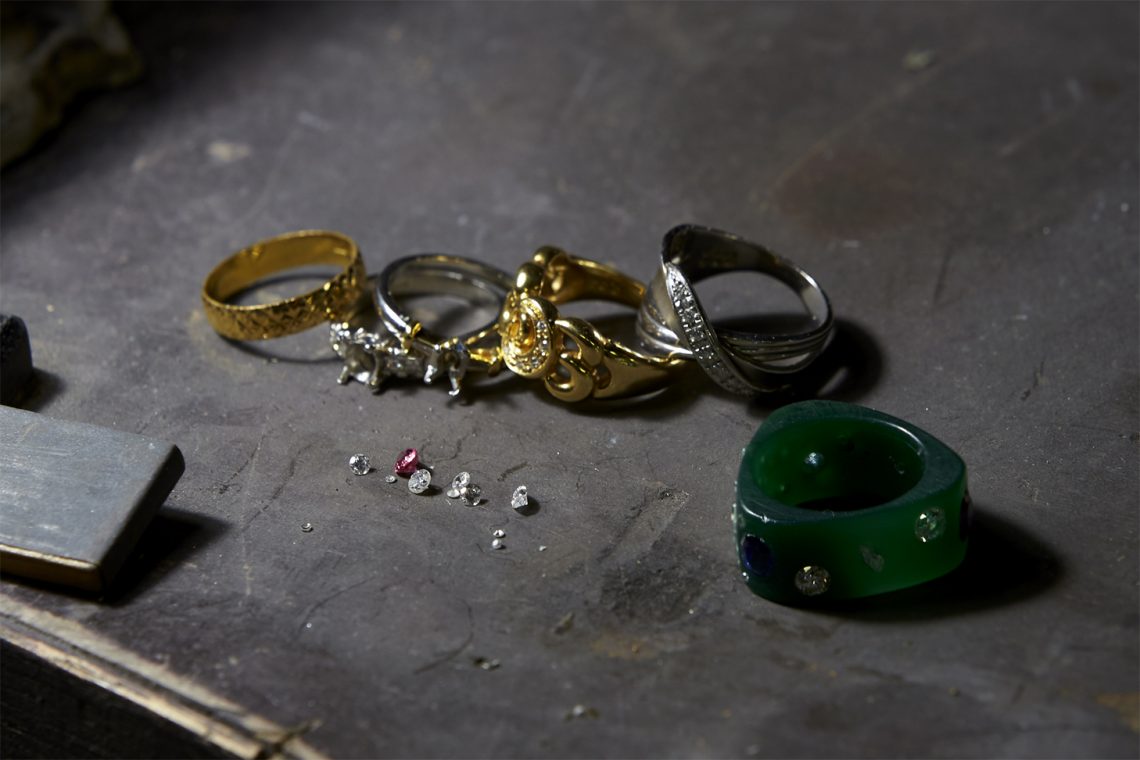 When jewellery is brought in, precious stones are taken out, and the original bullion is reused as much as possible. The green object on the right side of the photo is a prototype made out of wax for the jewellery after the reform. 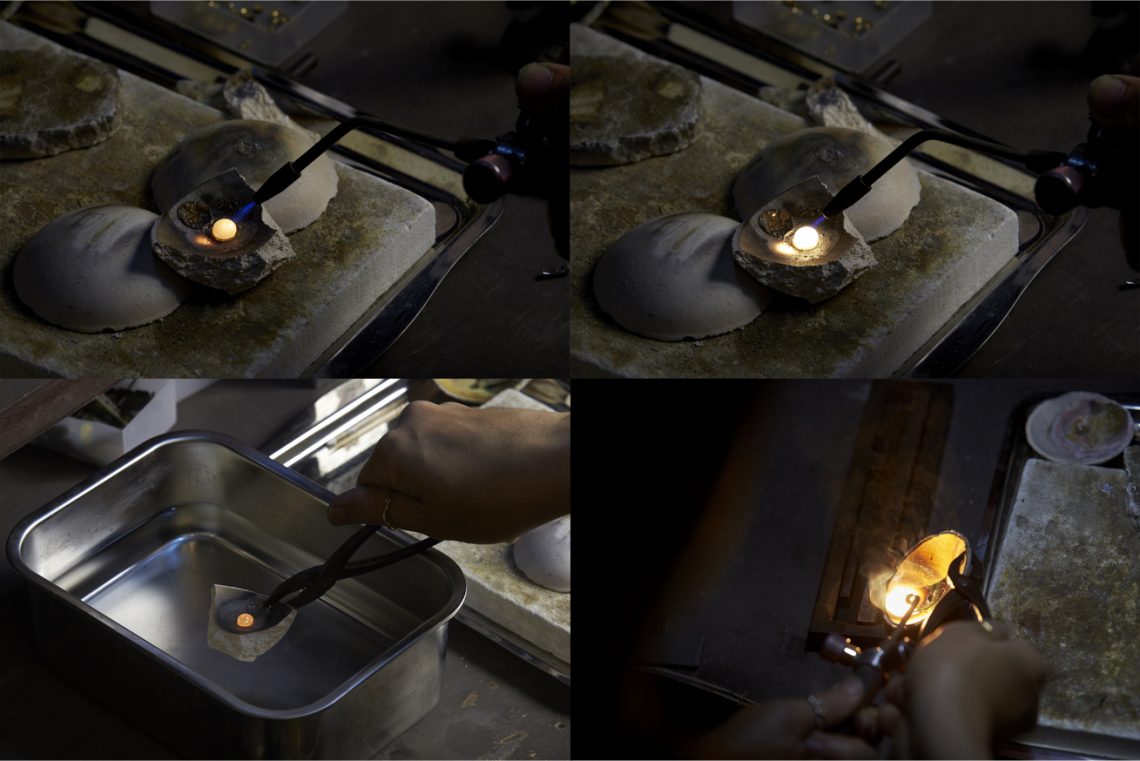 Melting of a bullion over a basin called ‘Chokozara’, the bullion radiates light like the sun. For this step the craftsman wears sunglasses.

Crafting jewellery for the stage. What came next?

An encounter led to the crafting of a Tiara to be worn on a theatre stage. Looking at pictures of coronation ceremonies for reference, crafting the Tiara like it was a genuine piece, was a ‘dream-like experience’, Mr. Sashou reminisces. Pursuing the utmost ‘reality’ together with the stage art professionals was very stimulating for Mr. Sashou, who usually works alone. And, having accumulated many experiences, Mr. Sashou is working on a new project right now. This project is the creation and crafting of original jewelry that brings near the traditional crafts that seem so far away nowadays. One of these is the ‘Vegetable Pad’. It is earrings and pin broaches designed after the cross section of lotus roots and okras, though in the middle you can find a part resembling the paw pads of animals and you can’t help but smile. Jewelry like this, where the craftsman’s playfulness shines through, makes metal that is supposed to be cold seem warm. It must be because of the warmth of the emotions of the craftsman towards the people wearing the jewellery. 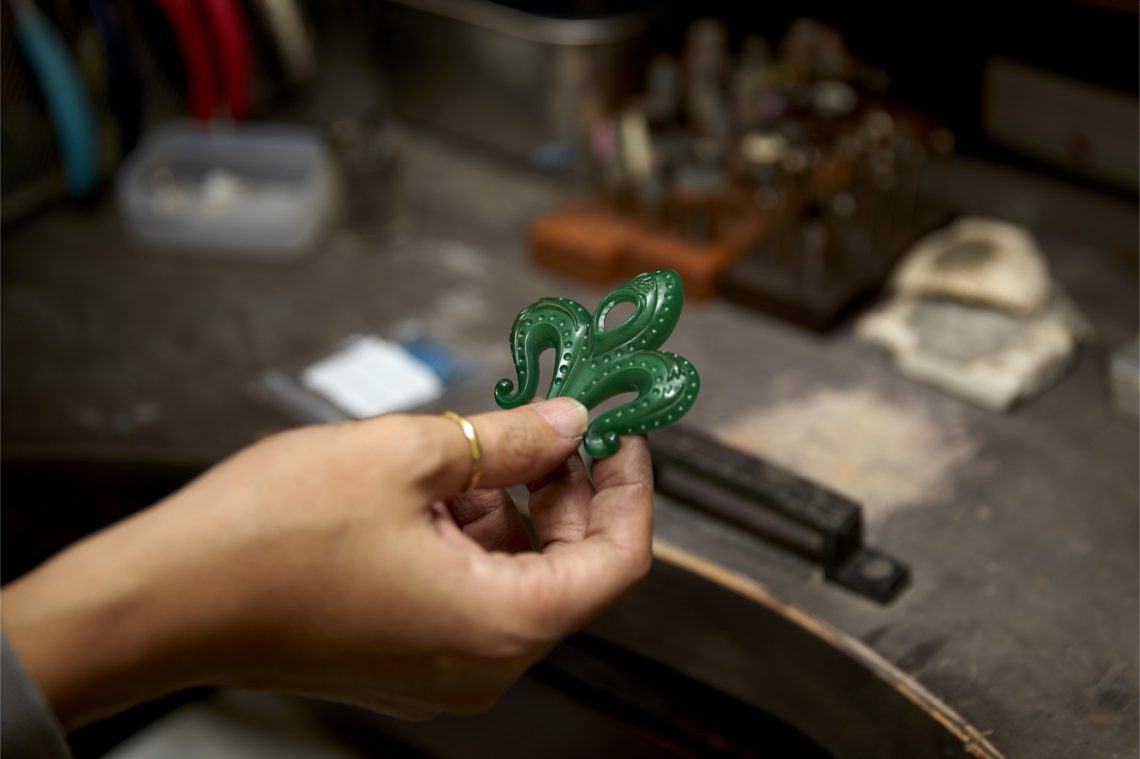 A wax prototype of the decoration-part of the Tiara. 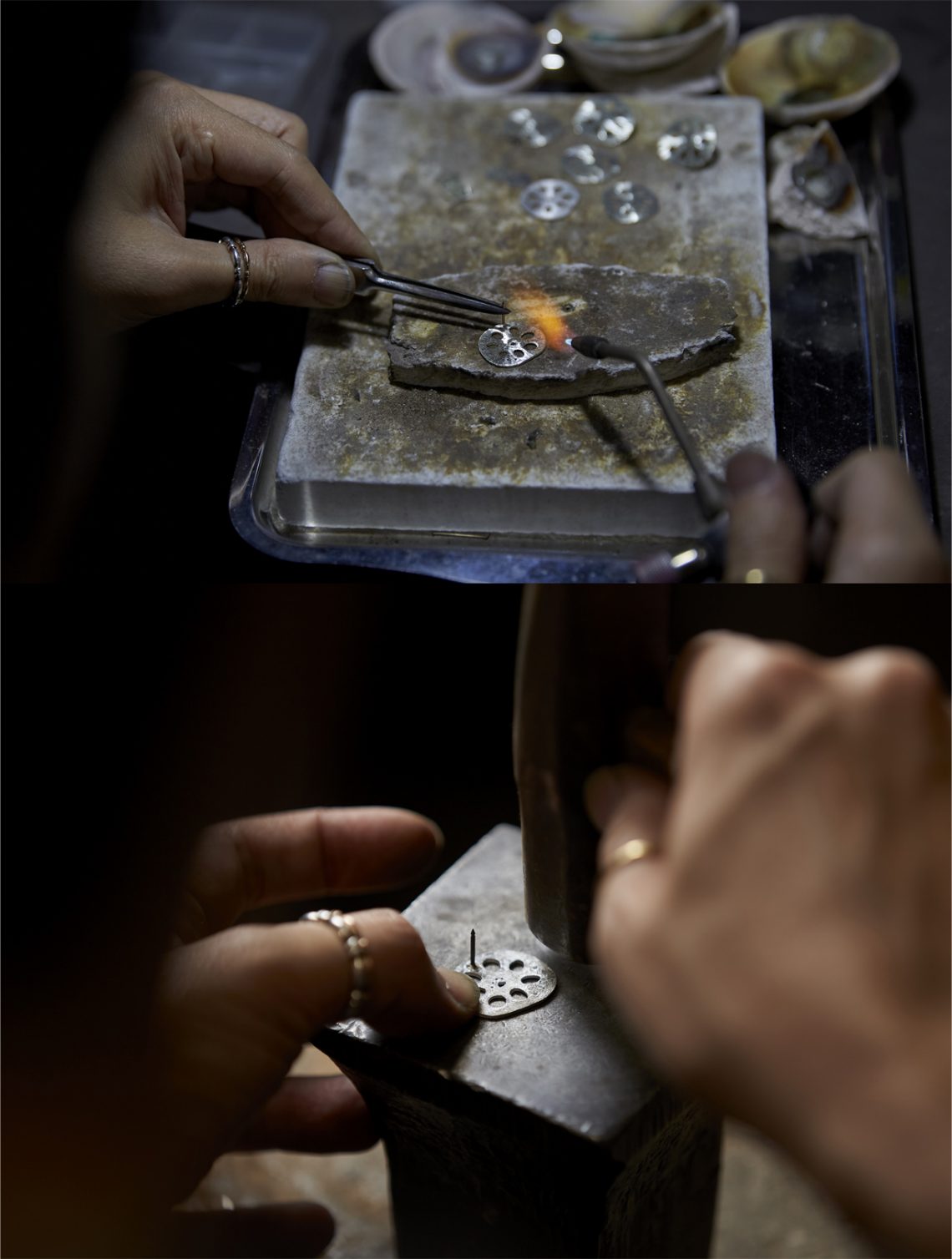 Using traditionally cultivated skills to craft jewelry that you can use light-heartedly. 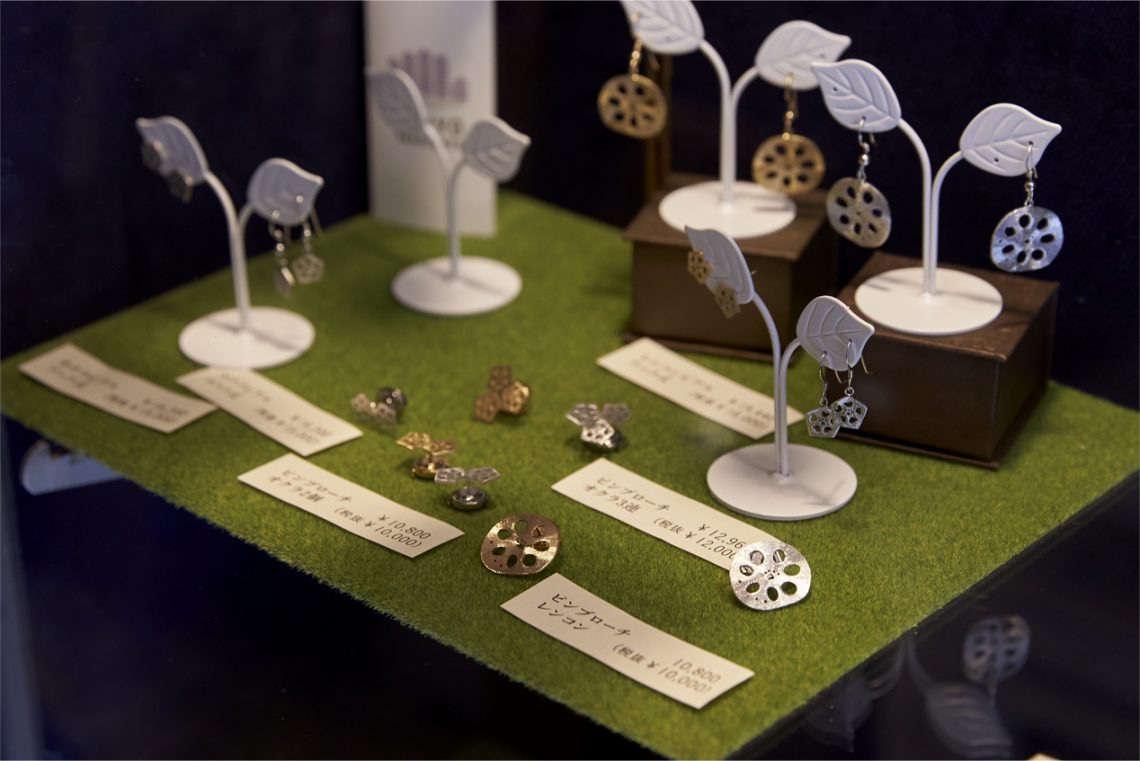 The reason the lotus root cross section was used as a motif, was its symbolic meaning of ‘looking beyond’, through accumulation of experience. The paw pads stand for the wish to feel happy by looking at the cuteness of its shape that just makes you smile. Also the idea of ‘walking forward steadily, one step at a time’ is being implemented. 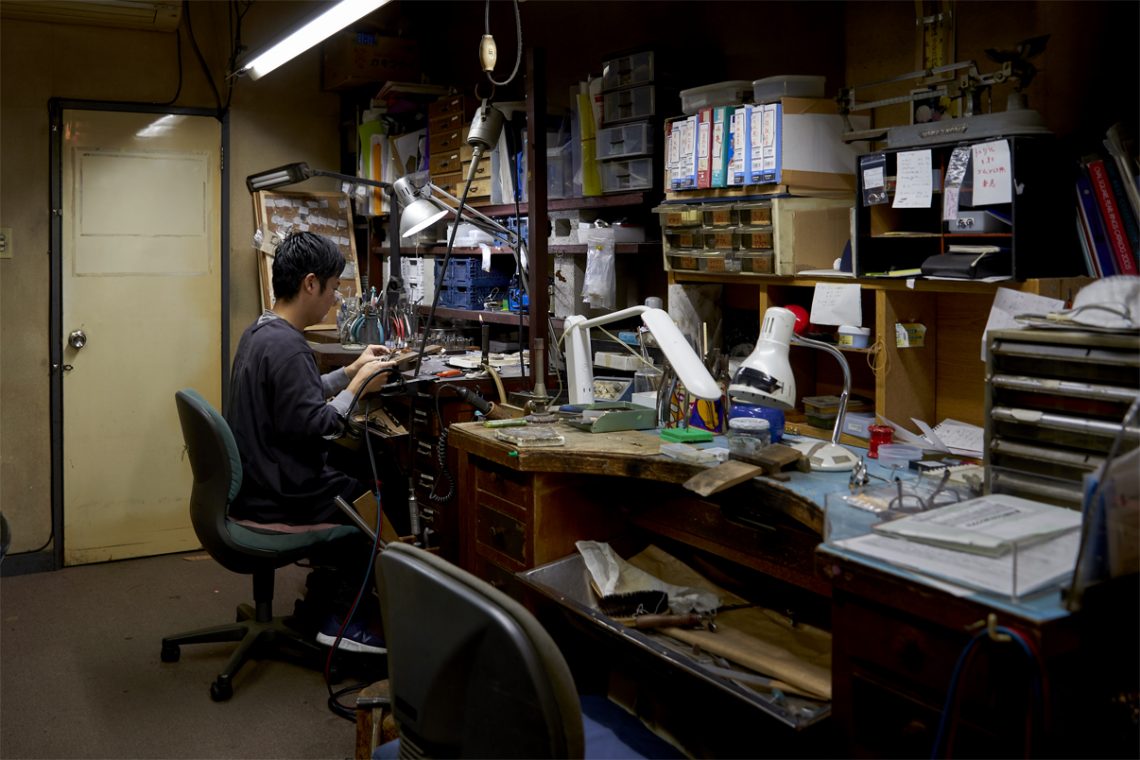