Established 100 Years Ago. The History Woven by the Murayama-Oshima Tsumugi, Until Now and Henceforth. 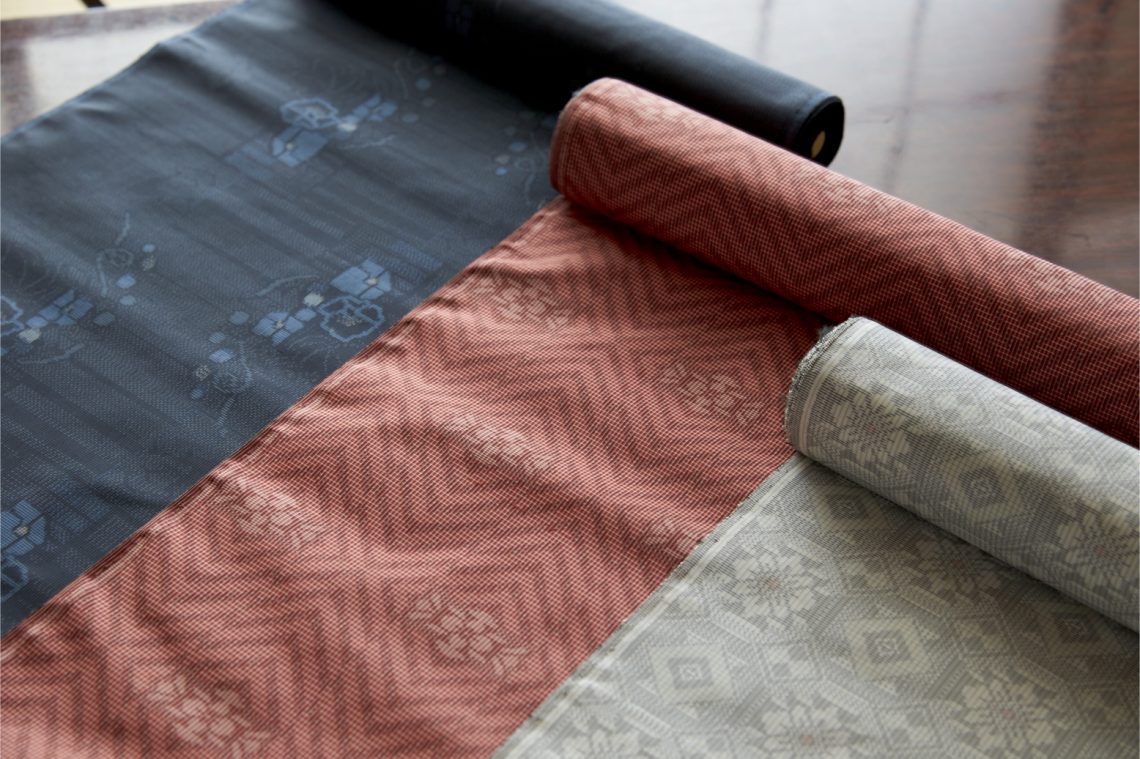 Born from the fusion of different techniques. The Tsumugi Kasuri (Tsumugi meaning pongee, and Kasuri meaning dyed & woven) that conquered a generation.

Unfolding between the borders of Tokyo Metropolis and Saitama Prefecture, you find the Sayama Hills, abundant with nature. Located at the southern foot of these hills, is the Murayama region, which was known since the Edo Period (1603 -1868) as the birthplace for Momenkon Gasuri (dark blue dyed & woven cloth). This Momenkon Gasuri was called either ‘Murayama Tsumugi’ or ‘Tokorozawa (city in Saitama) Gasuri’. When the Itajime Senshoku (dyeing technique using pressure applied through boards to transfer colour) was introduced from the Isesaki City in Gunma Prefecture around 1919, it became actively used in dyeing silk fabrics. As the Meisen Gijutsu (technique to weave threads so there is no front and backside) was introduced from Isesaki, and as it was also said to equal the ‘Genuine Oshima Tsumugi (Tsumugi from the Kyushu/Okinawa area)’, it was called either ‘Meisen Tsumugi’ or ‘Oshima Tsumugi’. In the second volume of the ‘Musashimurayama City Annals’, it is written that ‘from the end of the Taisho Period (1912 – 1925) until the Showa Period (1926 – 1989) with the continued expansion of sales channels, it became known as the “Murayama-Oshima Tsumugi” during this time’, and it is said that the name ‘Murayama-Oshima Tsumugi’ became established gradually after this. The peak of production volume was also around this time, and in 1934, around 460,000 han (one han being equivalent to kimono cloth for one adult) were produced. The second peek was during the so-called ‘Itohen Keiki’ (literally ‘yarn economy’, around 1950 when the Japanese economy, and especially textile production boomed), when production jumped from 49,000 han in the previous year, to 148,000 han. In the shop fronts of clothing shops an ensemble of Murayama-Oshima Tsumugi and woolen Kimono lined up, and production sites were booming, there was even the saying ‘if you weave something you can sell it’. 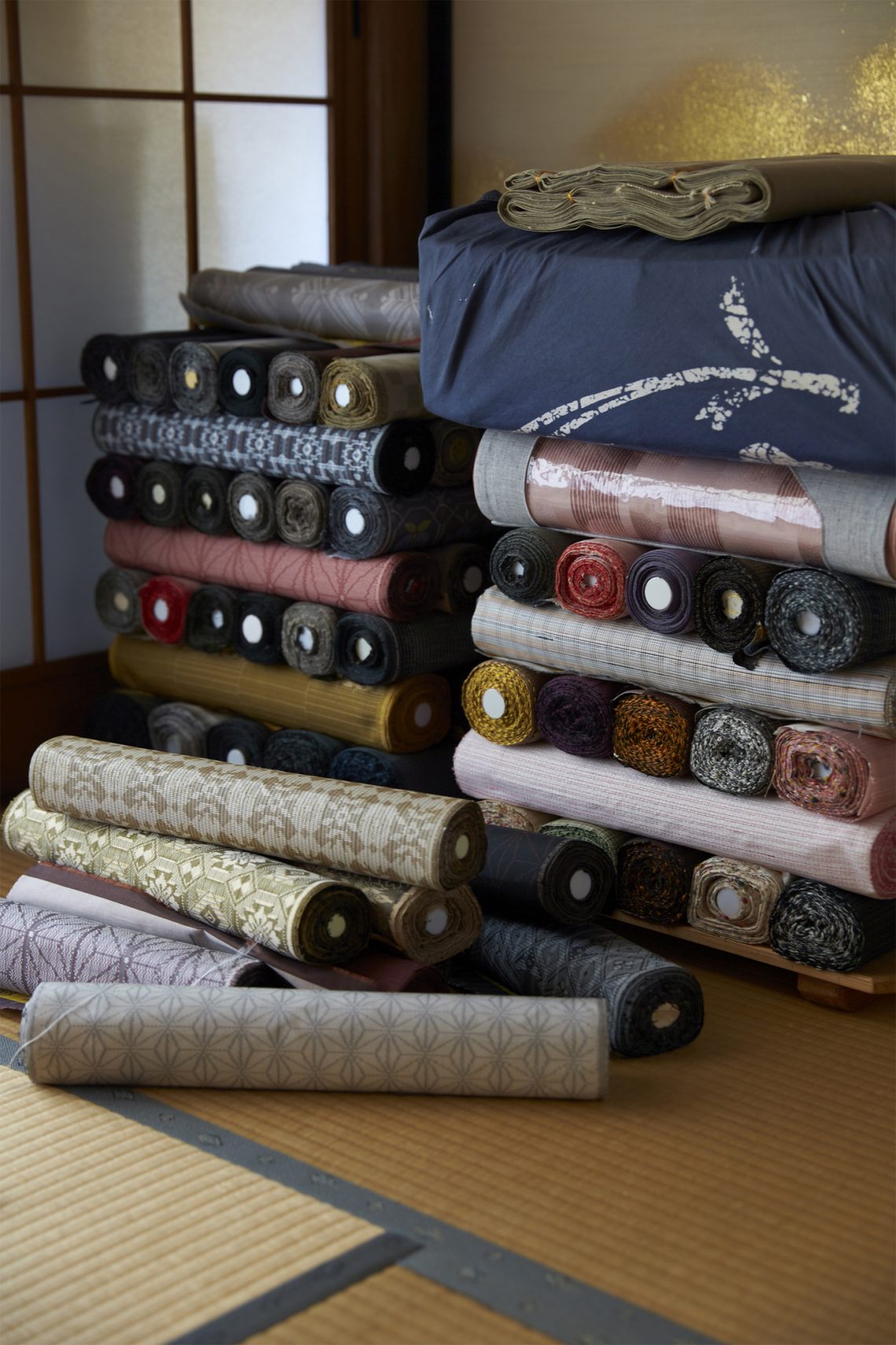 Finished Murayama-Oshima Tsumugi fabric. The fine dyed & woven patterns are all handcrafted. The gloss and vigour are characteristic for this cloth.

Designated as ‘traditional craftwork’ nationally and by the Tokyo Metropolis. 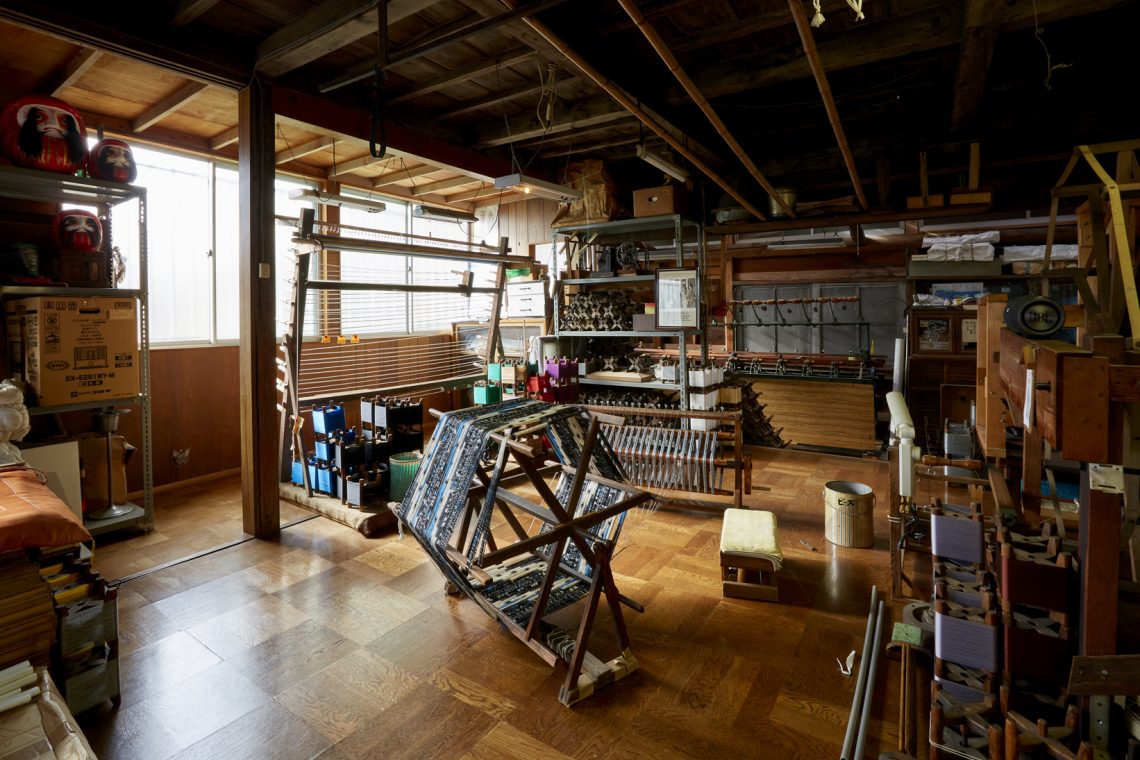 Workshop of the Tafusa Senshoku Co.,Ltd. The oldest pillar is apparently from 1914, the year the Atelier was established. 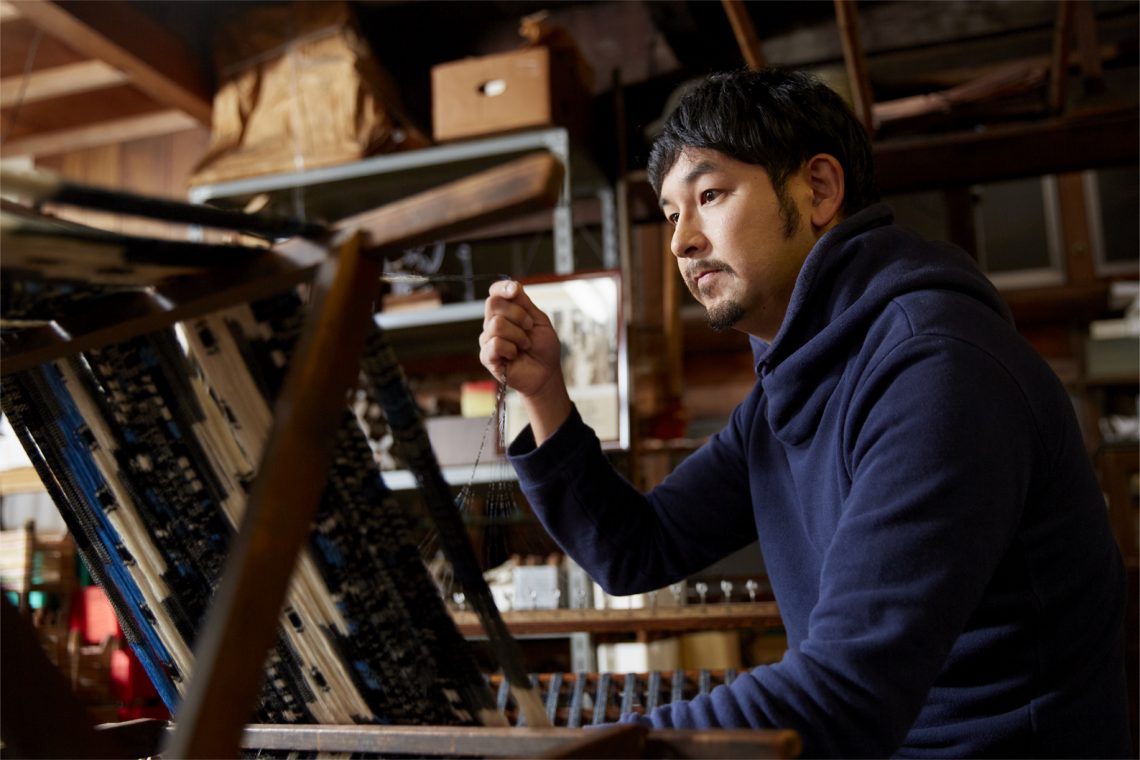 Drawing the base design on a grid paper, the Itaya (board craftsman) creates the Tsumugi board.

The first things shown to us were ancient notes. Here and there grid papers were pasted, and in the small squares ‘+’ symbols were written, with these the models for the Kasuri patterns are created. In former times with these base designs a craftsmen called Itaya used the wooden boards from 70 – 100 years old Japanese cherry birches to engrave lines, creating ‘Tsumugi Boards’. Unfortunately these craftsmen do not exist anymore, though apparently with warp and weft about 150 ‘Tsumugi Boards’ are usually required for the process. 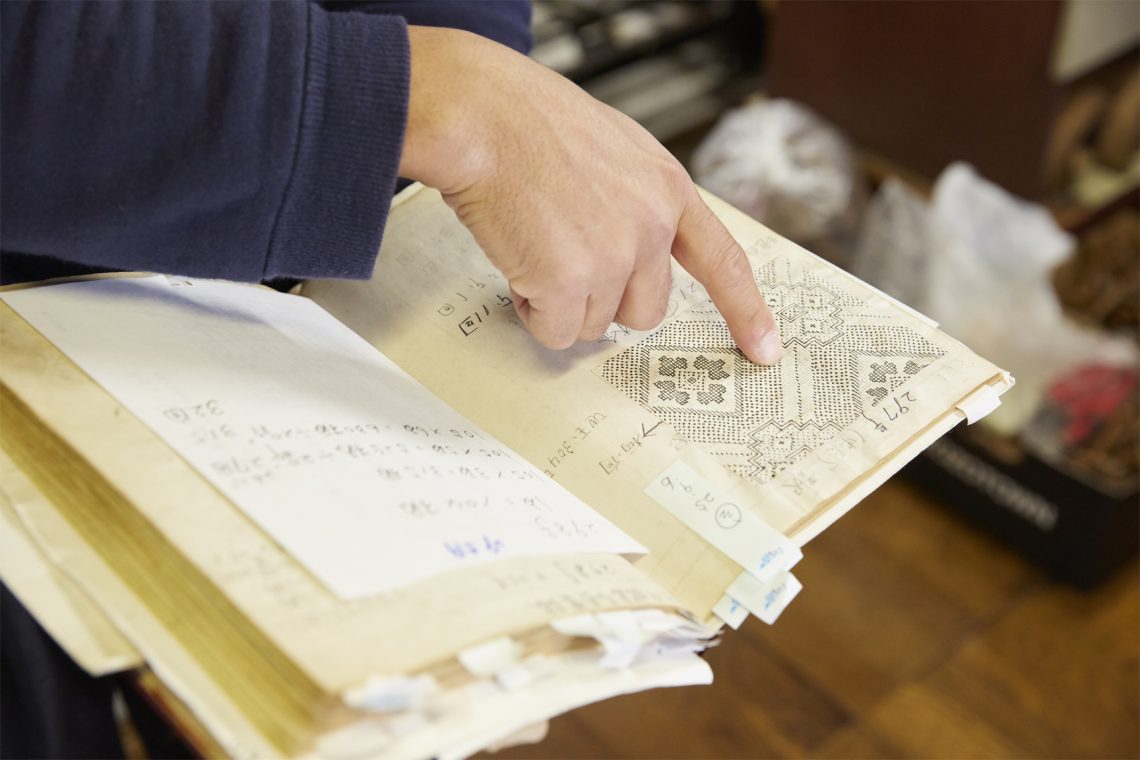 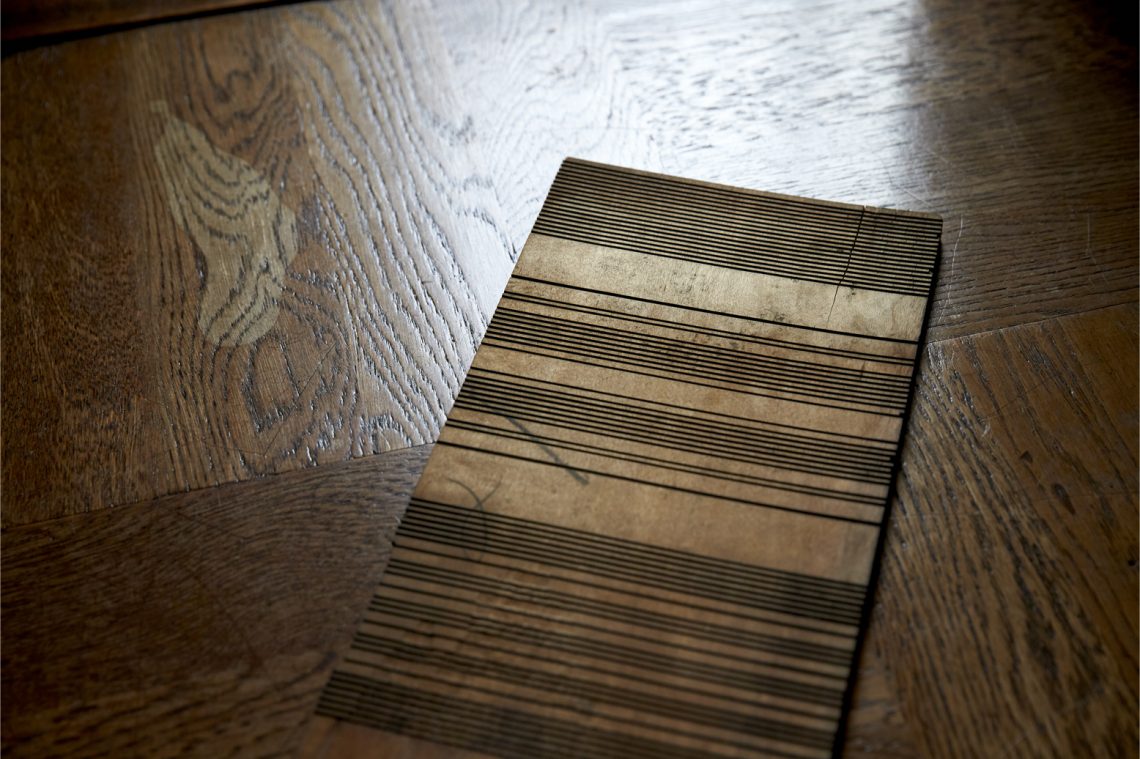 The ‘Tsumugi Boards’ are now precious, as the craftsmen that made them previously do not exist anymore. Silk threads are passed through this board, and then pressed with another board. By filling the lines with dye, these part are then coloured in. 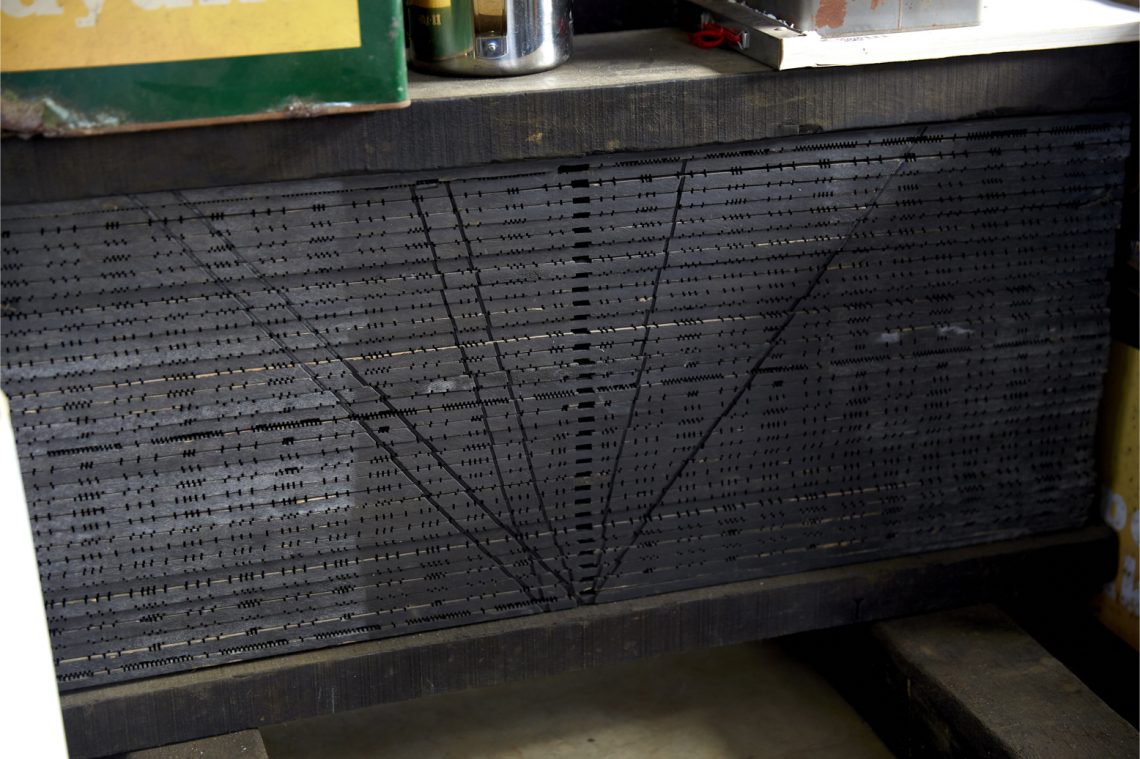 The Itajime Senshoku, bringing out the charm of silk fabrics.

After the Seikei, meaning aligning the refined raw silk threads into the necessary length and number, the silk threads are inserted into the ‘Tsumugi Boards’ one thread at a time, this is called ‘Itamaki & Itatsumi (winding around the boards & stacking the boards)’. The boards are then tightened with bolts, and the dye is poured in, this step is called ‘Itajime Chunyu Senshoku (injecting dye into bundled boards)’. As the boards are pressed together tightly the dye does not get in-between the boards, and can only flow through the engraved lines where it can dye the silk threads. This is the principle of Itajime Senshoku. By dyeing silk threads with simpler steps then the Genuine Oshima Tsumugi, Itajime Senshoku made production in large quantities possible. Not only this, there is also less stress put on the silk threads compared to the steps of Genuine Oshima Tsumugi and similar techniques, leading to the gloss and vigour that is characteristic for the Murayama-Oshima Tsumugi. 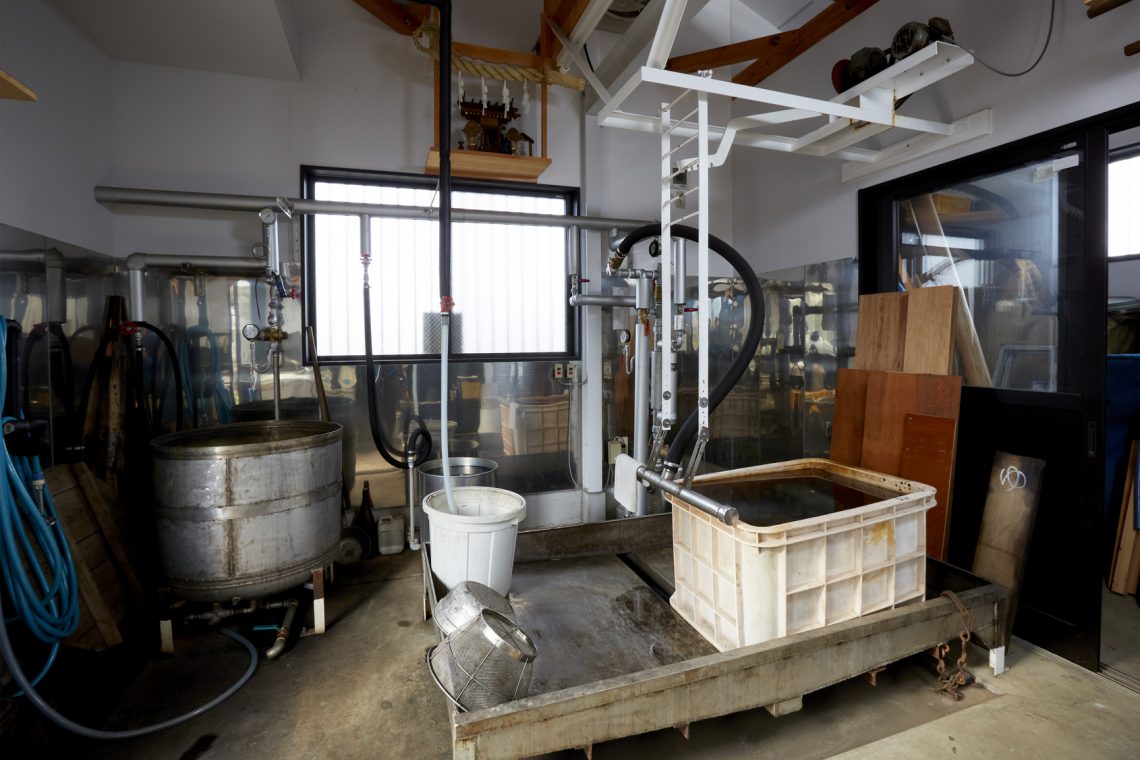 The someba (Dyeing room) of the Tafusa Senshoku Co.,Ltd.. Over the sink called fune (ship), the ‘Tsumugi Boards’ fastened with bolts are placed, and the dye is poured in.

The dyed yarn is strung into the machine, and the weaving begins.

Only one colour of dye at a time can be poured into the bundled Itajime boards. If you want to add another colour you have to tie the parts of the finished Tsumugi threads to be coloured anew, and while comparing with the base design go through the process of Surikomi Nassen (using a spatula to rub in the dye). After the dyeing process is finished, warp and weft are combined with the ground thread and winded on the ‘Omaki’. The winded warp is inserted through two tools called ‘Osa’ and ‘Hata’, and set into the weaving machine. While weaving each single silk thread is accurately combined, to weave a fabric just as outlined in the base design. 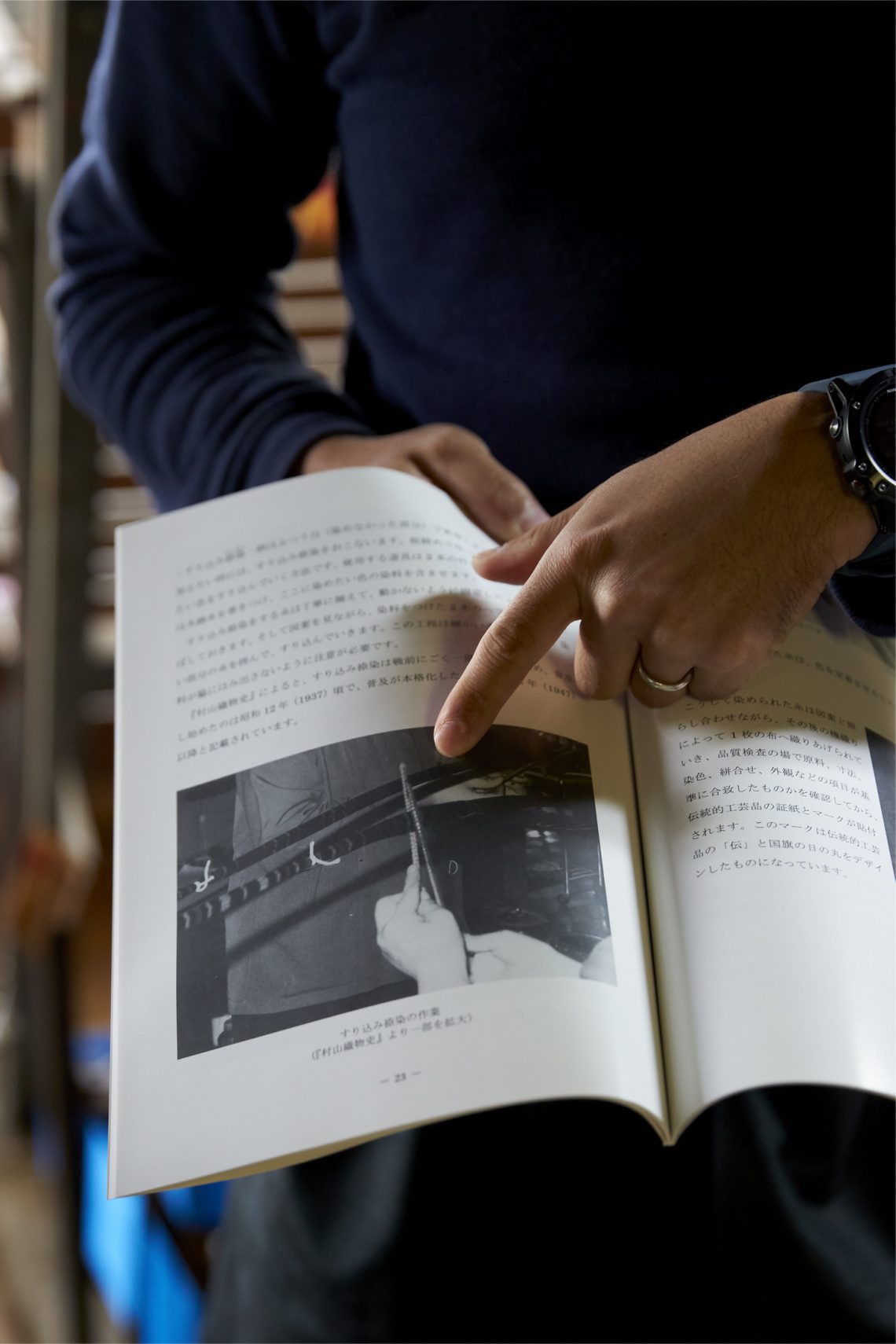 Documents explaining ‘Surikomi Nassen’. A bamboo spatula entangled with a cotton thread is used to rub the dye in. 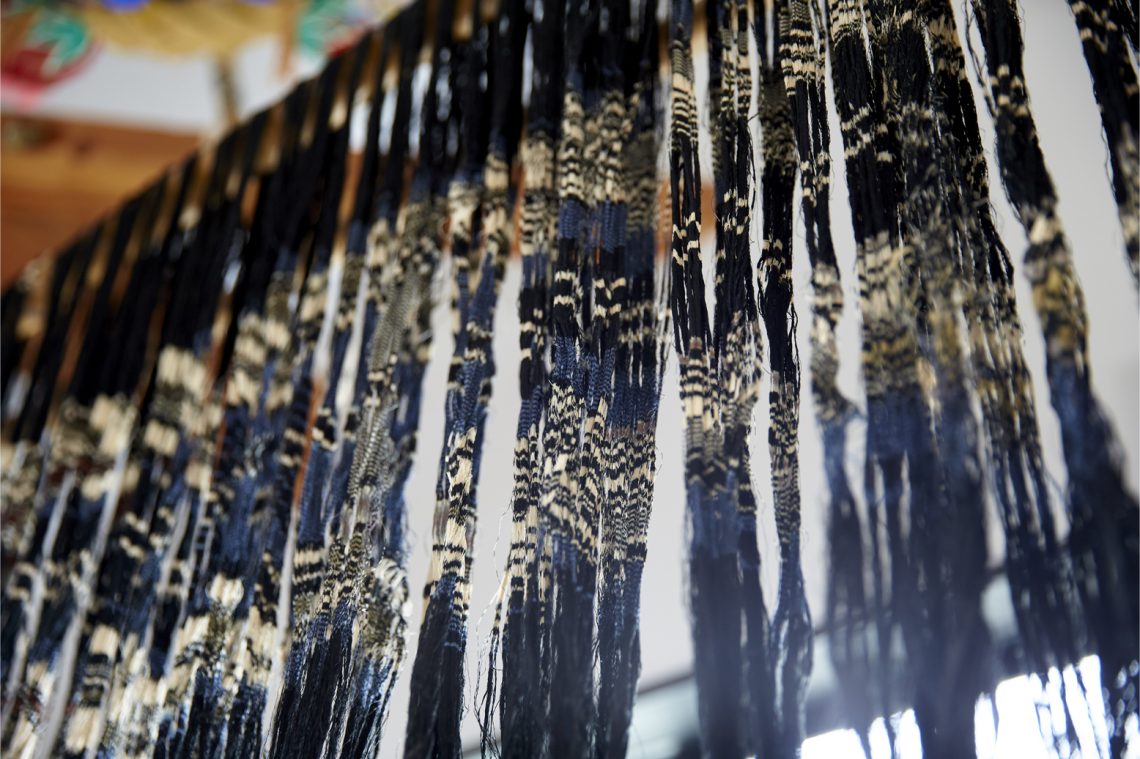 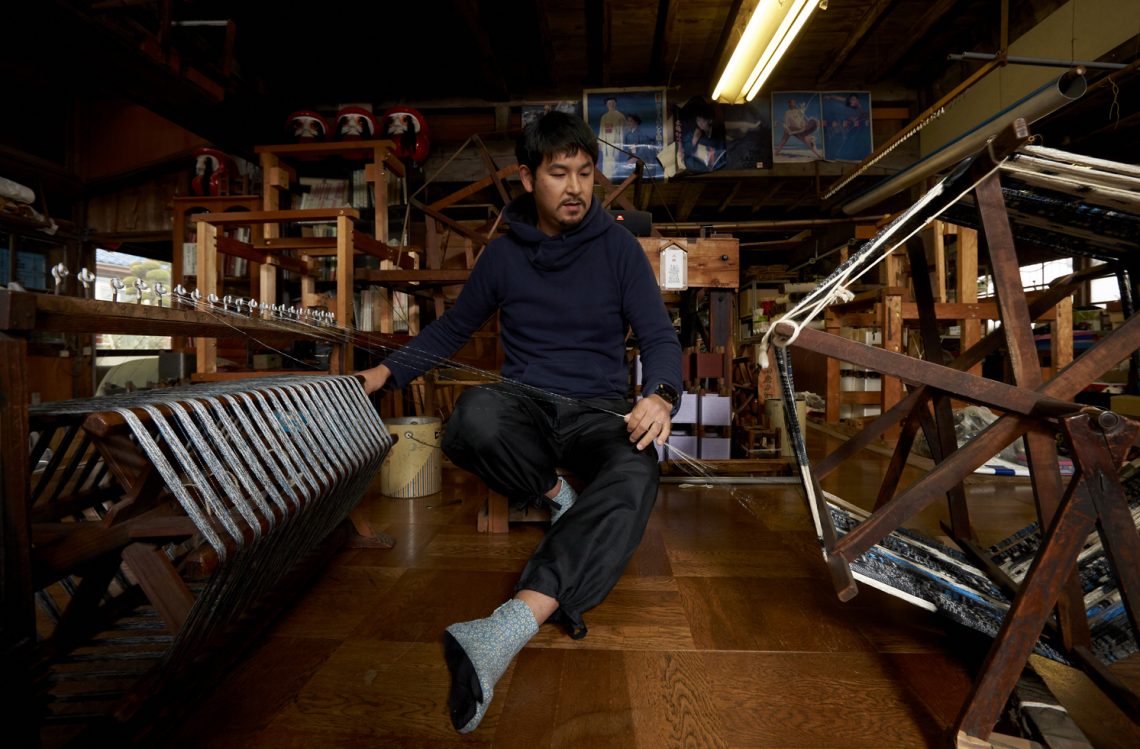 20 weft silk threads each are bundled when being dyed, so each thread is being divided. This step is called Hi Gasuri Gaeshi (Reversing the threads). 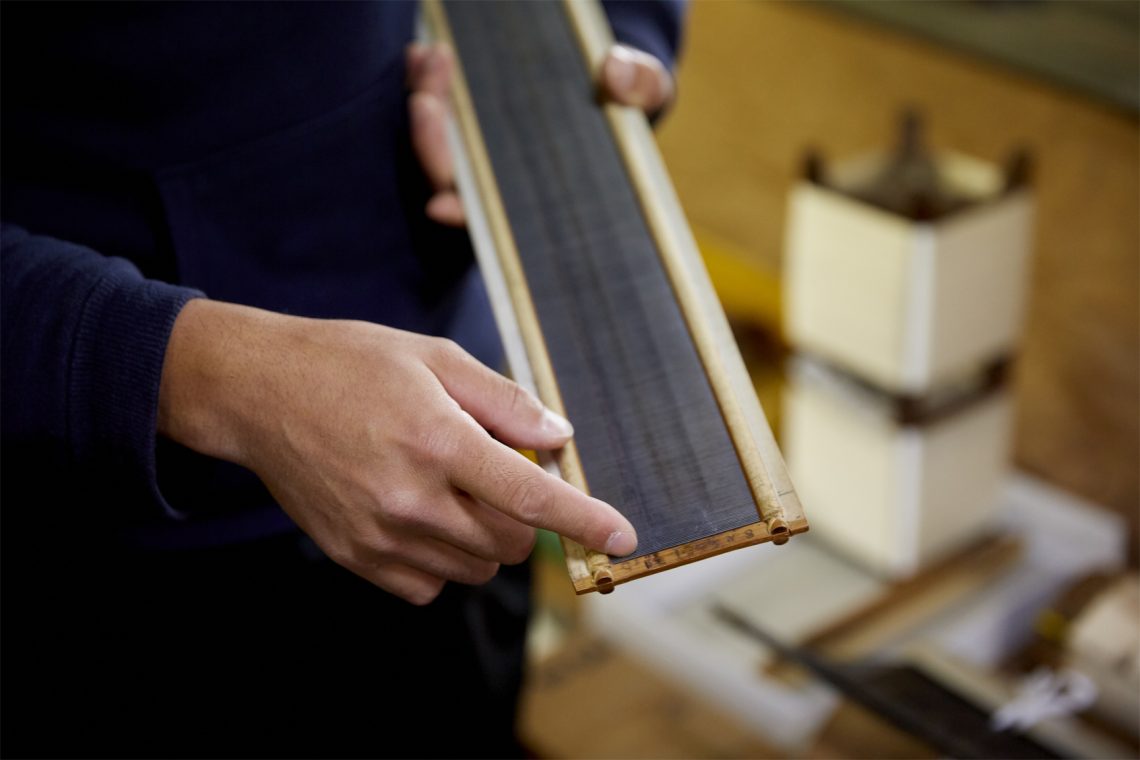 The time-consuming process of crafting Kasuri Tsumugi is also what makes it so endearing.

The production process for Murayama-Oshima Tsumugi cannot be covered completely in a short article. Formerly the labour was divided between different craftsmen, apparently for thread winding etc. there existed specialized craftsmen, though nowadays the Tafusa Senshoku Co.,Ltd. carries out all steps by themselves. We asked if it isn’t tough to have to do each single step involved in this work, though the answer was ‘The time-consuming process of crafting Kasuri Tsumugi is also what makes it so endearing.’ And further ‘Crafting is fun.’ Going through a rapid growth period since its origin, now there are only a few Murayama-Oshima Tsumugi craftsmen, though the thoughts towards crafting it have not changed. And nowadays not only fabric for clothing is produced, but all kinds of silk textile products for the modern life, with the unchanging charm of ‘gloss and vigour’, to hand down to the next generation.
(Reference materials (in Japanese): Compilation Musashimurayama-shi Kyo’iku I’inkai / Published in October 2007 [Special Exhibition of 2007 Murayama-Oshima Tsumugi – Designated intangible cultural heritage by the Tokyo Metropolis 40 Years Anniversary]) 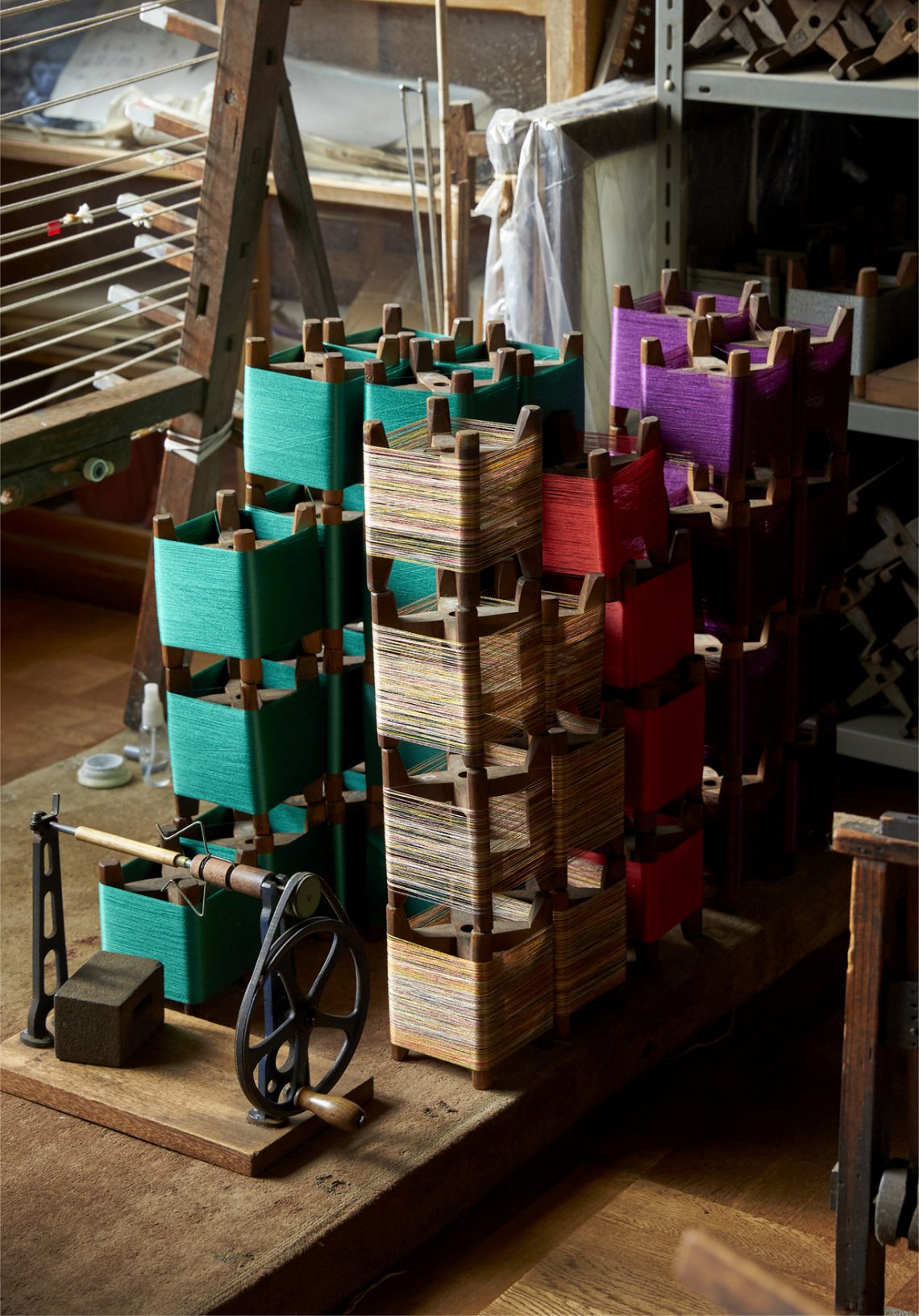 Murayama-Oshima Tsumugi uses a lot of tasteful colour tones, though at the Tafusa Senshoku Co.,Ltd. threads dyed in bright colours are used as well, to create textiles that fit the needs of today. 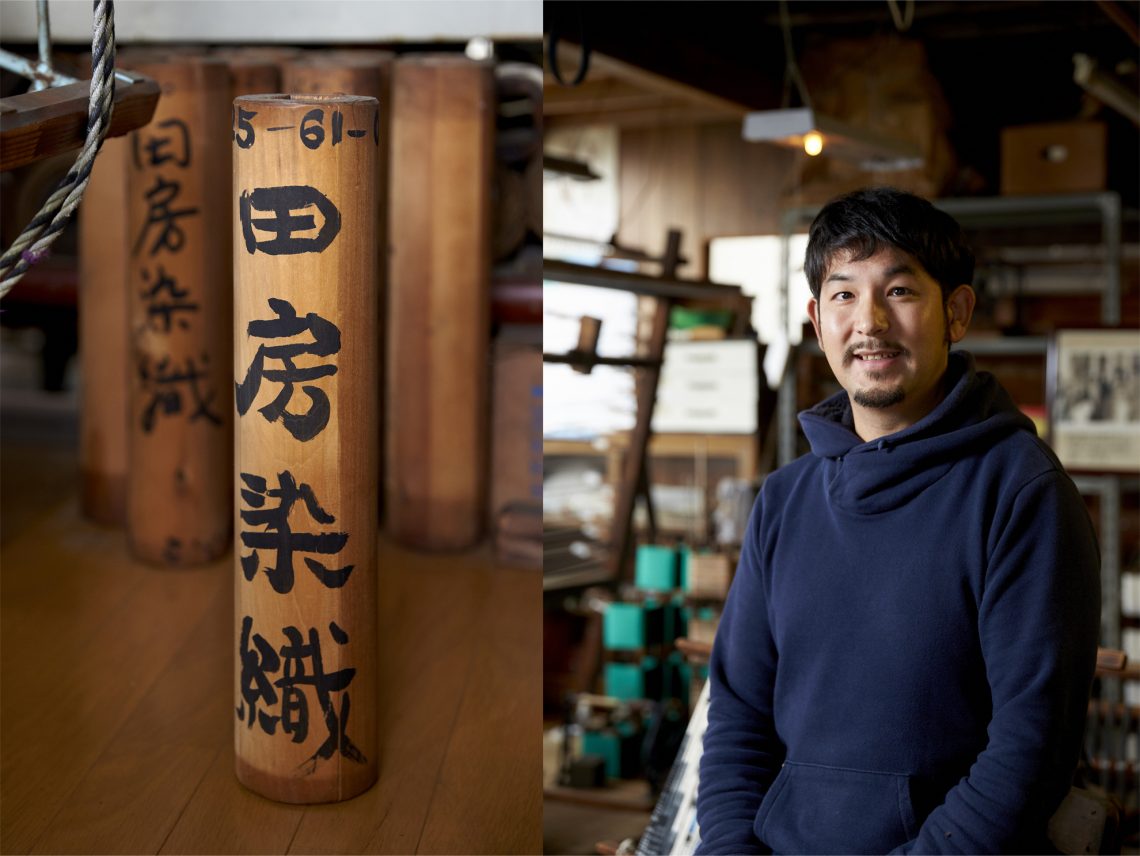